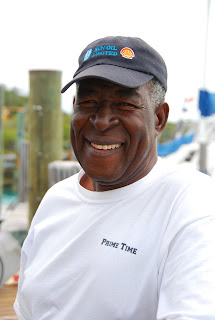 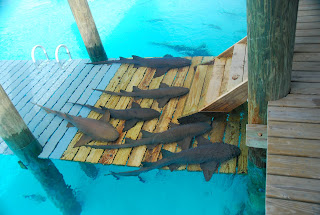 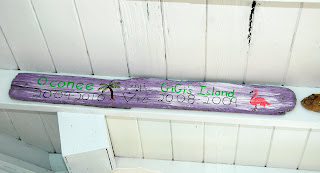 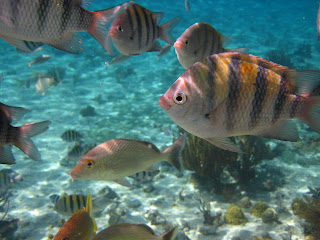 Oconee and crew have spent the last month getting to know the Compass Cay to Black Point area of the Exumas. Last year we sort of did a quick survey of the area (read got in too big a hurry) and moved on down to Georgetown. This year we are stayin' put and trying to “acquire” a little “local knowledge.”

This area has what G and I really enjoy – nice folk, gin clear water, an infinite number of places to swim and snorkel, and places to hold up in a westerly blow. In short we have found a home away from home. Our current plans are to stay in this area until late March and then go “walkabout” again – Georgetown, Long Island, Cat Island and Eleuthera.

Oconee threaded her way thru a 2 mile tongue of blue water surrounded by yellow sand shallows of the banks to hide from a westerly blow at Tucker Rolle's Compass Cay Marina. The island is gorgeous with well kept trails decorated with cruiser's art and beaches that provide miles of beach-combing or just a quite place to sit and read a book. To Oconee being in Compass Cay Marina was like floating in an aquarium. There are small reefs ever where well populated with fish of all kind (Tucker allows no fishing in the marina). There is even a school of bone fish that consider the Marina home.

Tucker is famous for his pet sharks. The dingy dock at low tide is underwater and the sharks have learned to sit on top of the dock and allow folk to “pet” them. Not to worry, they are nurse sharks and relatively harmless unless you do something stupid like pull their tail.

The other thing Tucker is famous for is his large family. Tucker Rolle is a handsome friendly black Bahamian in his early 60s. Tucker has 33 known children. There is hardly an island you go to that someone doesn't say, “I'm Tucker's son or daughter.” He is a remarkable man.

It was laundry time and that means Black Point Settlement. Ida has the cleanest coin operated laundry in the islands..not-to-mention is an accomplished beautician. Gigi (and I) think she is the best with her hair...and it was “hair cuttin' time” also. As we ambled up the street from the public dock luggin' our laundry toward Ida's the Black Point Police pulled up, rolled down his window, and said, “Hop in I'll take you up to Ida's.” Where else in the world will the Police give you a ride to the Laundry?

The minute G walked in the door at the laundromat Ida gave a little squeal, ran over and gave Gigi a big hug. She pointed to the wall where she and G's picture we gave her last year was still posted for all to see and said, “I knew you would be coming back.”

Black Point is a special community where you can get a great pizza, see traditional Bahamian sloops being built, and (of course) get the best coconut and cinnamon raisin bread in the Bahamas. Loraine's Mom at Loraine's Cafe makes traditional Bahamian bread to die for at only $5.00. The only thing I know that is better is French toast made from her bread. Mmmmmm! Good!

What really makes Black Point special to us is the kids. They are well behaved and friendly. It is always, “Good morning sir. Good afternoon mam. What you do here? Do you want to see my bike?” Walk by the school on your stroll about the community any day of the week and you hear no noise while the classes in session. Knock on the door and you will be invited in and greeted by teachers and students alike with a warm, “Welcome to our school,” said with pride.

It is a place where cruisers are encouraged to “volunteer.” The day we were there there was a lady from Utah helping a group of kids in rapped attention with their reading skills. I could not help but think how much our teachers back in the US would love to teach in an environment where, well...they could teach.

Kathy & Mike are the managers of Sampson Cay Club and Marina. Part of the deal is that they have 2 weeks off island every 5 weeks. That leaves the Bahamian's in charge. As the Contender pulled out to take them to Staniel Cay and their plane Gigi's parting words drifted over the water like an omen of things to come, “Remember Jimmy Buffett's song, Gypsies In the Palace...” (If you don't remember the song now would be a good time to dig it out and refresh the little “gray cells.”)

One day later all us cruisers were invited to attend Miss Cherry's 50th birthday party. It was to be a throw down for sure. By afternoon Bahamian's started showing up by the boat load. G and our friends off “Cat's Paws” showed up early to help them get ready.

It wasn't long before both Shirley & G had been roped into being the bartenders for the night and the party was in full swing complete with free food and free drinks. Miss Cherry had obviously spared no expense to celibate her 50th. With “Gypsies In the Palace” ricocheting around my brain cruisers and Bahamians alike partied down. There was even one guy there that looked like Johnny Depp out of “Pirates of the Caribbean”- hell he may have been Johnny Depp of that matter. He does own an island just North of Sampson Cay. I even think I saw “Snake.”

“Food” (a name not...something to eat) is one of the Bahamian managers for Sampson Cay Club and Marina. Over time G and I have gotten to know him and his 5 year old boy, Ashton. Ashton is a bundle of energy and very smart. One day I was talking to Food and casually commented to him that he needed to be saving his coins to send Ashton to college when he graduated from high school. Food grinned and with a shy glance at the floor stated, “Ashton already had a full scholarship to a school of his choice in Florida.” (No this is not where Bill Gates comes in.) It seems one of the mega-yacht owner had been so taken with Ashton they gave him a full ride to college.

Sampson Cay attracts a large variety of mega-yachts and Food knows them all. He has met the great and near great including: Louis Vittion and Johnny Depp. He and Johnny are friends and party together. Here is where
Bill Gates comes in. A few years back Food was working at Indigo Cay, a private island just North of the Land Sea Park. Bill rented the island for a week at $25,000 per day so he could read a book in peace. Bill was sitting on the beach when Food walked by and Bill asked him if he would mind sitting and talking for a few minutes. Food said Bill is just a nice laid back man that wants desperately to be “normal.” And Bill said as much to Food. Food, in his quite shy way responded, “Bill, a person with one seventh of the worlds income gave up being normal a long time ago. It ain't never goina' be mon.” Truer world have never been spoken. It ain't never goina' be.

We had been looking forward to George & Becky Shennan's visit for over a month. Gigi had planned to try and give them a true “cruising” experience, but we didn't know how “true” until 2 days before they were to arrive. This trip has been a series of fixing stuff that breaks this time it was major – the refrigeration went belly up. Oh well there is always ice, just like the old days. So they got to see the good, bad, and the typical.

We were lucky with weather, and were able to get in a trip to Black Point, the Pig Beach at Big Major Spot, a pot luck or two, a couple of good sails, conching, and a fantastic snorkel of Thunderball Grotto. Plus G and I got to try out our new underwater camera – a $300 Canon D10 point and shoot. As you will see from the photos it has already been worth the money.

Thunderball Grotto is located just off Staniel Cay. It is a domed iron rock island that is hollow (you can swim right thru the middle of the island) and it is rimmed with a beautiful coral reef and a huge fish population. Thunderball is where the underwater scenes from the Sean Connery, 007 movie of the same name were filmed.

When you slip over the side of the dingy one is immediately engulfed in a school of sargent major fish. They will come right up to your mask and look in as curious about you as you are them. You push your way into the current under a narrow ledge and into the grotto. Thunderball grotto has a feeling of “peace” almost like an underwater cathedral and is lit by stain glass like, holes in the top of the island. As you push your way into the blue water on the other side of the island and the current grabs you and you are swept back around the island to the point you started, past gardens of healthy coral of all variety, and past a huge variety of tropical fish. Take a look at the photos. Both G and I are astounded at what that little camera can do.

We really enjoyed George & Becky's visit. It had been way too long since I had spent time with them and it was good to renew our friendship.

PS – The refrigeration is still not fixed. We are waiting on Kenny, the refrigeration man from Nassau, – maybe tomorrow (That's a Bahamian “tomorrow” that could mean anything from 1 day to weeks).
Posted by "Gigi's Island" Days at 9:47 AM

It sounds like you've found a terrific place to hang out! Beautiful pictures -- beautiful words!