“It is perfectly legal to serve your husband bacon.” M/V “Big Run”

Finally after and expensive (but fun) stay in Nassau we made our escape and crossed the Yellow Banks to Big Majors Spot in the upper Exumas. It was a long 71 nautical mile run but there was weather coming and we wanted to be snuggled up to a big solid island before it arrived.** Here we were reunited with our friends Bob and Penny on M/V “Pretty Penny,” Ray and Susan on “No Agenda” and made a couple of new friends Jim and Christine Treadwell off “No Regrets.” We didn't know it at the time but Jim was to change our lives.

A West wind was coming and Jim and Christine were headed for Pipe Creek - one of the few all weather anchorages in the upper Exumas. Gigi and I have always loved Pipe Ck. but have been too “chicken shit” to feel our way in. Jim volunteered to lead us in on “No Regrets.” Jim has been cruising this area for the past 20 years and, like us, loves the upper Exumas especially Pipe Creek.

We left the following morning at mid-tide. The Turtle following “No Regrets” to a point about a mile off Wild Tamarind Cay (Rat Cay) where a rectangular rock on Thomas Cay lines up with a small white stretch of beach on Wild Tamarind. “No Regrets” took a heading directly in line with the visual marks until we were about 200 yards off the beach and then hung a right paralleling the island keeping to the “blue” water (blue is deep). At the end of Wild Tamarind we lined up on “the House” on Over Yonder Cay (see photo) and and continued in the blue water past the shoals off the end of Wild Tamarind. Jim lead us to a weed line (dark green) off the South end of Thomas Cay. The trick is to say on top of that weed line for about 100 yards and at mid-tide you will see no less than 7 feet of water. Once in we anchored in 12 feet of water over the prettiest sand you ever saw...and Old Vic could breath again. “The House” on Over Yonder, by the way, is reported to be own by the founder of Intel and there is as much house below ground as above, plus 3 huge wind turbines, and over an acre of solar panels...and it's own sea plane base.

About 2 days after entering the creek (not really a creek, by the way, but I'll get to that in a minute) Gigi and I were out fishing up near the cut between Thomas and Over Yonder Cays when we noticed the big yellow float plane that belongs to “The House” circling. We gave it an fleeting glance and went back to fishing as it appeared to head out over the Exuma Sound. The next thing we heard was the roar of it's engine as it split two rocks and passed over our head close enough to feel the prop wash from his propellers. Shit! ….would have if I had time.

The next day we watched this same plane land next to a sailboat at anchor below the level of his mast. Take a trip over to the photo page and look at that series of photos. I'm glad I was not on that boat.

Pipe Creek is not really a “creek” at all it is a channel that winds it's way thru the Cays and rocks from Compass Cay on the North and Over Yonder Cay to the South and is the “pipe” thru which the tide waters flow. For Gigi and I this is heaven. There are flats to explore, great reefs to snorkel, beaches to walk and friends to enjoy. Pipe is about a 10 minute dingy ride in all weather to Tucker Rolle's Compass Cay Marina and home of one of the best burgers (and most expensive in the islands) and, of course, Tucker's pet sharks. Compass is a beautiful Island with arguably one of the most picturesque beaches in the Exumas. Sampson Cay is about 3 miles South and Staniel about 5.5 miles and on a good day not a bad trip by dingy. The best thing about Pipe Creek is it is not full of boats like Big Major's Spot, home of the famous swimming pigs, not-to-mention it's water are the clearest I've ever experienced...and that's saying something. Salty Turtle has found its Bahamian Home. 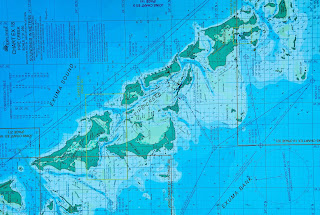 Just before the storm hit (remember we came in Pipe to get out of a Westerly blow) I took this photo of “No Regrets” and “Pretty Penny.” I had just enough time to get the camera below before the front came thru with a vengeance. We had driving rain and a quick swing to the NW. It blew 20 to 30 most of the night. Gigi stayed up on watch. I went to sleep..wasn't any need in the two of us not getting any sleep. I believe a fresh crew is better than a worn out one...and I'm stickin' to that story. 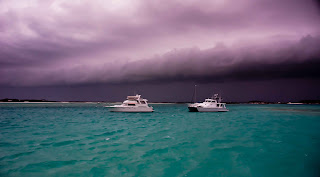 Stingray As My Guide:

Gigi had been about to die for some “Chicken Souse” so after the blow we headed for Little Farmer's Cay and “Ocean Cabin” run by Terry Bain and his wife Ernestine. Earnestine makes the best chicken souse in the Bahamas and you could fill a book with Terry Bain stories. He is infamous. There was a second purpose for going to Little Farmers. We needed to deliver this years school books to the all age school and to take the 2013 photos of the school kids. We delivered the books but it was a “holiday” for the kids so the photos would have to wait.

What is “Chicken Souse” you might ask? Well it is not what you are thinking. It is sort of like Southern “Chicken Pastry” - a stew of sorts. You cut up chicken parts (usually wings but could be any piece of chicken chopped up with a machete to un-recognizable bits – why they do this I don't have a clue) and marinated with lime juice. Then the Bahamians cook the chicken in chicken broth with carrots, onion, celery, and potatoes, add whole allspice and serve with “Johnny Cake” or “Turnover.” Johnny Cake is sort of cornbread with a high mix of wheat flour with just a hint of sweet. The difference between Johnny Cake and Turnover is Johnny Cake is baked and Turnover is cooked on top of the stove with a cast-iron skillet. Chicken Souse is served with slices of lime and bird pepper to kick it up a bit. Ernestine's “souse” is the best and we have done our research. 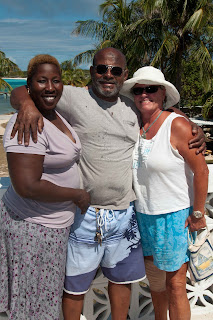 A little after noon Terry came back to Ocean Cabin. He and a friend had been over to Big Farmer's Cay trying to catch a goat. A few years back Terry released a few goats on the island as a source of “just in case” mutton. Mutton? Thought you said it was goat he was trying to catch? In the Bahamas “mutton” is goat so if you see “mutton curry” on the menu it is goat you will be eating. Da goat was too far back in the bush for them to catch so there was no “mutton” on Earnestine's menu that day- shame too I wanted to try her mutton curry. Terry and his bud didn't catch a goat but from the look of the empty rum bottle they sure had a good time not catchin' one.

While anchored off Western Bay at Little Farmers before heading into “Ty's Sunset Bar” for sundowners and ribs Gigi and I jumped in for a swim and snorkel. Ty claimed to make the best ribs in the Bahamas...which he doesn't but he does make a damn good rum punch and the view is wonderful.
One of the great things about snorkeling is the wonders (or mysteries) of nature continue to surprise even seasons “waterholics” like us. Off the end of “Salty Turtle” a small stingray was swimming and he had a “friend,” a “Blue Runner” - really a “Bar Jack” in the snapper family but most Bahamians call them “Blue Runners.” I watched this pair for 20 minutes. If the Blue Runner went forward the Stingray went forward, if he backed up the Ray gave a couple of flips in reverse. Wherever the Blue Runner went the Ray went. They never touched each other so it was not some sort of “cleaning station.” I don't know why or what dove the odd behavior. When I left the water they were still buddy swimming. I've never seen that type of behavior before. Maybe it was a “fishy” version of a gay marriage? Any body reading this have an answer for this strange behavior inquiring minds want to know? Please drop us a note if you have an explanation. This one has us stumped.

The winds went South and Little Farmers, Blackpoint and Big Majors become a bit “rolly” with Southerly winds so it was back to Pipe Creek for us and our friend Jim on No Regrets. In our absence Jim's wife had flown out for a few weeks back in the US and his brother Doug had flown in to join Jim for a few days of R&R and “brother” time. The two of them are the salt of the earth and generous to a fault graciously sharing their larger more comfortable boat tender, stories, and most importantly – their friendship. Over the last couple of weeks Jim and Doug have shown us more great snorkeling spots than we ever thought existed and extended our knowledge of this area quite a bit. We owe Jim big time and really enjoyed meeting his brother Doug.

Mike and Maril Doster will be in Sunday for a visit and they don't know it yet but they owe Jim already. He volunteered to pick up Mike and Maril in Staniel Cay and it is supposed to be blowing 20 – 25 out the West and my little dingy would beat them to pieces and soak them to the skin. Even in Jim's tender it will be a bit of a wet ride but nothing like “the experience” would be in our dink.

After Mike and Maril's visit we plan on taking the school photos at Blackpoint and Little Farmer's and then heading for Long Island for a few days and a reunion with “Pretty Penny” and “Barefootin”
Fairwinds and Rum Drinks,

PS – Ply me with enough rum and I might show you how to get into Pipe Creek...might I said. You'll just have to take the chance if ya want da local knowledge.

**Note to Sailors: Using the Explorer Charts if you cross the Yellow Banks using the line from Porgee Rock to Allen's Cays you will experience the fewest coral heads to watch out for. We use this line until we reach Longitude 770 0.0' by then you are out of the coral and can head south to any destination you chose with no worries mate.