Total Miles to Date: 600 nm
“I find the great thing in the world is not so much where we stand, as what direction we are moving; to reach port, we must sail sometimes with the wind and sometimes against it – but we must sail, and not drift, nor lie at anchor.” Oliver Wendell Holmes

Friday, the 31st of October, was the day before the Georgia / Florida football game and Fernandina, like all towns within 50 miles of Jacksonville, was packed with football fans gettin' “prepped” for the big game. When in Fernandina Gigi always gets her a “mani and a pedi” and I always go to the Palace Saloon and drink beer – do what ya do best I always say.

I left Gigi at the “Mani & Pedi” store and headed for the Palace. The town was full of fans dressed in Red and Black with a sprinkling of fans of the “other” persuasion – clearly Fernandina was a Georgia town that just happened to be in Florida. The Palace was filled to overflowing with “Dawgs” already well oiled and it was only 2:00 PM, the day before the game. The Georgia fight song was blowing the doors open on the Palace and sounds of “Ooof Ooofs” were echoing in my ears. The Palace was no place for me today! I headed for the Green Turtle Bar about 2 blocks away to do my duty and suck down a beer or two.
As I crossed the street there was a man with a GA shirt sitting on a bench in front of one of the stores obviously doing what most men do, wait for their shopping wives. We struck up a conversation. Being originally from Georgia my self I asked where he was from. He said Edenton to my surprise. I told him I was from Sparta a scant 30 miles from Edenton and introduced my self. His eyes widened. He was Jessie Copeland originally from Greensboro and he had met and had nothing but respect for my Grandaddy, Jimmy Copelan. He said, “Mr. Jimmy”planted and cut hay for his Grandad.” When he called him “Mr. Jimmy” I knew he was the genuine article - a Green County boy that truly did know my Grandad. When you meet someone like Jessie that actually knew your Grandady it, in away, brings him back to life for a warm moment or two. It is a small world. But that was not the only surprise Fernandina had in store for me that day...

After “a few” beers at the Green Turtle and some pleasant conversation with new friends Gigi called and asked me to meet her at the Ice cream Store...don't remember a time I've turned down ice cream. While waiting out front of the Ice Cream Store (you always wait on women..think it must be a rule) I noticed a couple with red and black “Oconee” shirts on some folk. I introduced my self and told them the story of my boat “Oconee.” They were from Watkinsville, a small town that is now part of Athens. My cousin Steve Tingle has a business in Watkinsville and I asked if by chance they knew Stevie. The husband said he did not but...his wife piped up and said “but I'm distant kin to Dale, Steve's wife. Dale and I grew up in the same town.” For the life of me I can't remember names..wish I did. They too were nice folk.

All and all, it was a really good day. I enjoyed the company of some new friends. Drank me some good Florida beer...and Florida makes some good beer. Ate some good food. And had me some real pleasant surprises. But best of all, I got to remember my Granddad.

One of my all time sailing heroes was Dick Bradley. Dick wrote a column for Motor Boat & Sailing in 60s and 70s. Dick's columns on boating (of course) and on life yielded bucket loads of simple wisdom. Dick used to say that you didn't need courses in “seamanship” you needed courses in “landsmanship.” “God,” Dick said, “would teach you all ya needed to know about seamanship.” On land it was a complicated “crapshoot.” He also had a hard fast rule he called the rule of “Chicken seamanship: Never put yourself in a position you might need seamanship.” I have done my best to live by Dick's rule...occasionally I fail.

We left Fermandian and rode the height of the tide down the Amelia River. The first part of the Amelia can be a little skinny and G and I like to have at least a couple of feet of tide under us for this section. We hit 10 knots in places between Fernandian and the crossing of the St. Johns river. I commented to Gigi that we were seeing more current than normal in this section and was not looking forward to pushing that current once we crossed the St. Johns. I had no idea...

After we crossed the St. John's River our speed dropped to 4.5 knots - one whale of a current and now we had us a convoy of boats in front of us to add to the mix. The current thru the first bridge turned us every where but loose. The second bridge in this section always has the worst current. The ICW narrows here and all the water of the Sound flows between the fenders of the second bridge. Our friend Dan Boeny often anchors and waits for slack before attempting the passage thru the bridge..Dan is a wise man. Ahead of us was a couple of catamarans, Slow Fight – another Defever 44 like the Turtle, and last in line just ahead of us was an about 60' express cruiser. Express cruisers can create a huge wake when they apply power. Their stern digs a hole in the water – result huge wakes.

We waited our turn, backed way off on the throttles and put about 100 yards between us and the Cruiser. We could see it was not going to be fun from the way the other boats were getting kicked around but it looked do able. It was all we could do to hold position in the 5 knot current. When the last cat cleared the bridge and the Express kicked her engines to life with all but full throttle and pushed a huge wake thru the bridge. I powered up the Salty Turtle and started to follow the Express thru the bridge. Gigi mumbled something like, “Do you think we should wait..?” At that slim point I had a choice - go or spin the Turtle and wait a bit for the wakes to die down. Right here is where a lifetime rule was broken. I applied more power. I had no idea how big a trouble I was in. 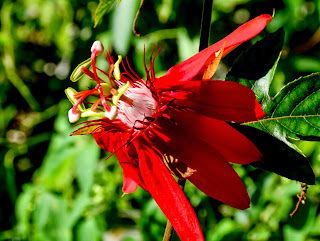 One hundred feet off the bridge fenders the Cruiser's wake ricocheted off the shore and combined with the standing way under the bridge creating 4' waves that seemed to be coming at the Turtle from all directions – sort of like trying to push a 52 thousand pound boat up a mountain cataract. I pushed the throttles to unknown territory around 2000 RPMs, A-framed my legs to brace my self, and did what the boat told me. This is one of those situations you can't think thru you just have to react. Waves and current were kicking Turtle all over the place. We were rolling 15 degree from port to starboard at the whim of the standing waves and kicking Turtle's stern about like a ping-pong ball. I was making 20 degree rudder corrections and the Turtle was still not responding. It took adding every drop of power we had to port or starboard engines as required (steering with engines) to keep us from careening off the bridge fenders...and even then it was a matter of slim feet. Slowly, ever slow slowly I was able to regain control of the boat. By the time we were exiting the bridge fenders the Turtle was just fighting current and I was able to ease off on the throttles a bit. At this point I glanced at the GPS and we were doing a screaming 3 knots...and safe.

Gigi took a breath..I think her first since we hit the wake...and said,” Were you scared?” I took my first breath and said, “No, too damn busy to be scared.”

Dick Bradley don't ever let me break that rule again!!!!

Memories are our most prized possessions..maybe our only true possession. A good one is like gold in the bank to warm our hearts, minds, and yes..bodies. They can change a back day light and shift our moods in a blink of an eye. It was like that the other evening at anchor South of Pine Island. It had been an especially grueling day (see above). The Turtle was swinging to her anchor and I was sucking down a well deserved “sundowner” when I looked up to see a navy blue Island Packet swing off the ICW and quietly anchor a couple of hundred feet ahead of us in the creek. I knew that boat? I grabbed the glasses and took a closer look. It was...it was... “Slow Dancing” and suddenly, in a flood of memories, it was 8 years past in January and Mike Yount and I had just finished a long wait for weather to cross to Bimini...

The night was dark and there were 29 boats that were crossing at the same time, about 10 going to Bimini the rest headed to Nassau, Morgan's Bluff, or Chub Cay. For some reason we struck up a conversation with Paul and Diane Kline (?), also first timers, on Slow Dancing...and we did not know it at the time but a friendship was born and one of my lifetime memories was deposited in the bank.

In Bimini Mike and I ate our first Bahamian lobster cooked by Diane aboard Slow Dancing. We crossed the banks a few days later together and held up for a three day 30-40 knot Northeaster in Fraiser Hog Cay – Slow Dancing at the Berry Island Club and Oconee at anchor. That storm is still the storm by which I measure all others. The Mule and I turned Slow Dancing's bow and pushed them off the Berry Island Club dock after the blow and helped them escape the grip of the dock and bottom (they were aground). We met again in Marsh Harbor in the Abacos and they “shepherded” me a bit since they knew I was now single handing.

Paul and Diane sold Slow Dancing, moved to (of all places) Washington, NC and took up golf and became a CLOD (that's “Cruisers Living On Dirt”). But..Slow Dancing kept her name and is still cruising fulfilling another couple's dreams...and salting away gold in their memory banks. Me? Just seeing that boat sail once again into my life brightened my day.

We are in Palm Coast waiting the arrival of Victoria Gaye, Temptation, and Skat with long time cruising friends NC aboard. Today there will be one hell of a reunion on the back deck of the Turtle. Tomorrow Salty Turtle will start her plod South again. Next destination Titusville and a visit with Steve and Aggie Knox (another set of CLODs).