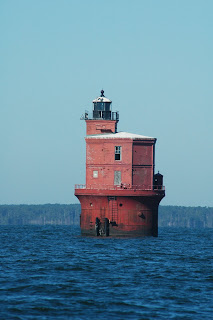 On October 2nd Gigi’s Island was as ready as she would ever be. G and I hauled in our docklines at Stingray Point and headed south. The trip south to Wrightsville Beach, NC, was pretty much un-eventful and I will not bore you with the details. Except for a couple of stories.

Just out of mouth of Mobjack Bay an AIS marker appear behind us on the chartplotter. For you non-boating types AIS is sort of a poor man’s radar. All 300 ton and above vessel are required to send a signal that identifies the ship by name, description, speed, location, port of origin & destination, direction and it’s heading. If you have a receiver it will show up on your chartplotter. This mark was moving up behind us like “packman” had haunted the GPS. I got the binoculars out and this thing was throwing a “rooster tail” - remember this is a BIG boat. Turns out the boat is a Navy vessel named the Stiletto, close to 80 feet long and 40 feet wide making 34 knots (we found out later it was capable of 60 knots). Went right by us. We got pictures.

As we were approaching Thimble Shoal’s light near Norfolk we spotted a helicopter hovering above 3 Navy inflatables dragging a line out of the back of the chopper - thought it was probably search and rescue drills. We continued on toward the mouth of Norfolk harbor when we heard the chopper coming up behind us at speed. The helicopter was dragging a barge at an estimated 30 knots. Ever see an aircraft pulling a boat? Now that is an odd sight.

Turns out we were not the only ones taken unawares, as seagoing container ship was frantically trying to hail the helicopter on the VHF radio and trying to figure out how to dodge a chopper towing a barge at speed. After talking to some friends that work for the Navy about the incident choppers are now used for mine sweepers and what we probably saw was mine sweeper drills. 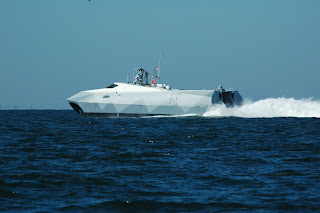 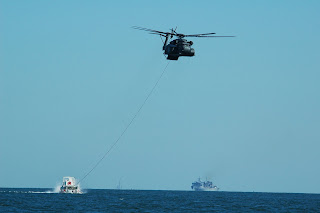 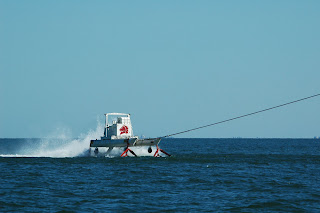 Hey, Vic and Gigi -- What a good idea! This'll make it easier to keep up with you all.

Welcome to the blogosphere!

Gigi and Vic ...
I LOVE this format! I'm looking forward to seeing a lot of postings and PICTURES !!!

Vic & Gigi
This is so great. Next best thing to being there!

Im so glad you are "blogging" this trip instead of emailing. Ain't technology great?