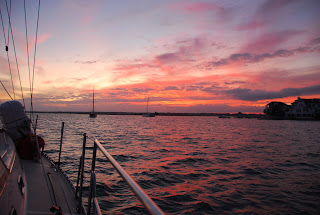 Why Does It Always Have To Be 2:00 In The Morning?

Mike Doster showed up (as promised) at Matthews Point on Monday the 20th to load the “Island” down with fresh “bambi.” I think even he was impressed with how much deer her freezer would hold - all but 4 packages worth of a whole deer. Now the adventure could start in earnest with the Island properly provisioned. Thanks Mike.

So Tuesday morning bright and early we were off like a heard of turtles headed for Swansboro, NC. We elected to tie the Island to Casper’s dock rather than anchor out. I’ve never liked the anchorage at Swansboro. It is like trying to anchor in concrete - two boats drug anchor while we watched safely tied to the dock. Mike Yount and I visited Casper’s for the first time close to 20 years ago in my old Ranger-29. They were not open when we tied up so we went up to see if they had their hours of operation posted on the door. They did, “Open when we are here. Closed when we are not.” I instantly loved the place.

Next day, we pushed on the next day to Wrightsville Beach and anchored in Banks Channel. There was a bad blow coming and we wanted to be tucked in tight when it hit.

Everyone that know me knows that I love big anchors and am a bit of a fanatic about “stayin’ put” as they say. But sometimes just “stayin’ put” isn’t everything. The blow hit about 1:30 to 2:00 AM on Saturday morning...and it hit with a “crash” and a “boom.” Why is it always 2:00 in the morning when these things hit?

The first blast was a 50 to 60 knot gust. Both Gigi and I looked out to make sure we were holding and we were so back to bed we went (first mistake, should have set an anchor watch). Then the wind piped up and the Island was sailing her “hyknee” off at anchor with the boat laying over about 15 degrees on each tack - no worries mate that big old Rocna anchor is doing her job quite well thank you.

Then what we first thought was a “special” gust came and “everything on the high side” went to the floor.” It was not until later that we discovered “that gust” was really a boat fending off down our side, busting out a piece of our canvas, breaking the roll pin in the grill mount, and taking the rescue horseshoe with them as they left - never did see the boat or find out who it was.
As we were rushing on deck, a horn sounded. A boat had yanked her anchor out of the bottom and was slamming into a dock on the causeway. No one was on deck and another boat in the anchorage was trying to warn them with his horn. I grabbed horn and decided to add to the chaos to try and get the folk on deck - the back blew out of the horn, so much for that idea.

Just about that time a Bristol 45 appeared out of the dark with a bit in her teeth and a determination to hit us mid-ships. I yelled at G to crank the engine and crank it now. She did and we motored ahead just as the Bristol slid off our stern. For the next few hours we played “dodge’m” with the 4 boats that had broken loose and were wandering around the anchorage. It was a wild night but the Island stayed where we ask her to. I could mention the good old USCG and their reaction to a call for help from the boat blown into the causeway but I will not. Those people are worthless. Why do you need to know how old the people are on board when their boat is getting slammed into a wall?

Sunday we made our way down to Southport and met Charlie. G and I had taken the marsh walk to edge of the waterway to watch the sunset and made some new friends. There was a birthday party in progress in the gazebo and, in the southern spirit of Southport, we were invited to join in. It was there we met Charlie and master Rob. Charlie is the “little tyke” pictured in the blog and yes he and his master are now new friends. Cruising is like that - nice people and new friends around every bend if you open your heart and let them in.

The trip from Southport to Barefoot Landing was uneventful..thank god. That strip of real estate is my least favorite on the waterway. There are 2 very shallow and shoaly inlets and then there is the “Rock Pile” - a 5 mile stretch quarried through solid rock. If you wander out of the channel there you will do some damage. We didn’t - no hits, no groundings, no error, Thank you.

We are currently tied to the dock at Barefoot Landing, SC, with another state behind us and 3 more in front. While here we met William Fogarty, headed south, by him self, with the boat of his dreams - a Bristol 30, christened “Booty.” He will be keeping the boat at the Sailing Club at Dinner Key, In the Grove at Miami - with luck we will see him down the way. 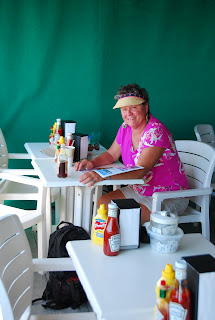 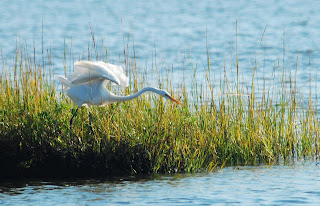 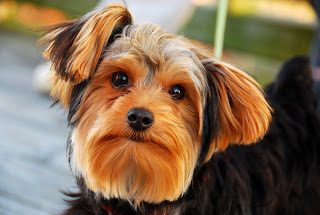 You have all the fun!

My stay at Wrightsville in company with Temptation and Skat was simply boring compared to yours. Granted Earl and I did get some comic relief from Jim taking the last corner before the anchorage a bit wide and coming to an instant stop almost putting his pulpit in the water...I swear he put his first mate on the cockpit sole!

Local word is those young Coasties at Wrightsville are far more diligent than you give them credit for....they go to great lengths to make sure everyone carries a whistle or horn in the dinghy with them in the interest of safety.

Now just how does one blow the end off a horn?