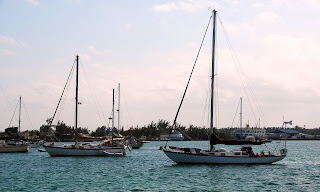 We had been at anchor in Marsh Harbor for a couple of days when a rather water worn Pearson 424 eased into the anchorage. A man of about my age with graying hair set in a pony tail walked forward and eased her anchor over the bow and lay the chain in a very seaman like manner. He was single handing and obviously knew what he was doing. There was something familiar about the gentleman but I was not sure what...

All of a sudden I realize that anchored in front of the 424 was a 41 foot, Rhodes Bounty also built by Pearson. Pearson started building boats in the 1960s and went out of business in the 90s. I had a real opportunity for a great photo (at least from a sailor’s prospective). Here was a fine example of the first very generation of Pearson yachts and one of the last boats they ever produced to be had in one photo. And, Got it!

As G and I went ashore later in the day I gave a glance at the stern of the 424. Her name was “Sarah.” And I was pretty sure it was not just “a Sarah” but “the Sarah.” A few years ago Dale and Corie, friends of mine that had the slip next too me at Matthews Point, had given me a copy of a dvd titled “Sarah’s Atlantic Circle Cruise” - an excellent cruising video done by John Stevenson, the owner. Mule did an about face and we slid up to her stern. The gray haired gentleman came on deck and I asked, “Is this the famous Sarah and are you John.” John gave us a great big toothy smile, laughed and answered ...simply, “Yes.”

We had just made a big batch of chicken soup so naturally we invited him for drinks and supper. John brought wine, books to trade, and copies of his latest two videos. A good evening was had by all swapin’ lies and sippin’ rum. And Gigi and now knew a celebrity plus had a new friend.

We left Marsh Harbor on a mission. We finally had a day that we could snorkel the reefs off Sandy Cays about 21 miles south of Marsh Harbor. Sandy Cays face the mouth of North Bar Channel and are open to the Atlantic Ocean swells and for that reason you need days that are basically flat calm to snorkel their waters. In the Bahamas this time of year calm is rare as the proverbial “hen’s teeth.” Sandy Cays Reef is part of the Land Sea Park System and is protected from fishing or taking of anything but photos and memories. Thus it is as pristine as it gets.

By 2:30 we had anchored “Gigi’s Island” off the ruins of Wilson City in the Bight of Spencer, saddled “Mule” with her engine, and were tying her to a mooring ball off Sandy Cay’s reef. It was a beautiful sun drenched day with crystal clear water. You could see the reef just below the surface but nothing would prepare one for what we were about to experience. As we slid over the side of Mule into the water a forest of stag horn and coral of all variety just explodes into your vision. We were on the wall of a channel with coral, fish, and color as far as the eye can see.

That day we swam with an 8' eagle ray, 2 blue fish of about 80 pounds, a large grouper of yet undetermined specie and when I say large I mean the size of me (it felt like it anyway). Then there were schools of blue tang that just envelope and adopt you into their school. And there was the lone barracuda...we gave him “his” space. It was a day to remember. Gigi and I have been hoping for another calm day so we can sneak back down to Sandy Cays but to no avail.

The “Island” tiptoed her way into Little Harbor at high tide. Little Harbor is one of those places where we have to enter at high tide. The entrance at low water is only 3 feet deep and we draw 5.5 feet. Pete’s son Greg was having a wild pig roast on Saturday I wanted to see how the Bahamian’s do it.

Pete’s Pub is a true open air bar with beach sand for a floor, decorated by Tshirts from all over the world, and memorabilia of all shapes sizes (see photo of a customers cell phone nailed to a support). To boot there are great drinks, great sea food, and good fun. Pete’s dad came to the island in the mid-50s with his family. His dad was an artist working mostly in bronze sculpture. The island has natural limestone caves so he and his family moved into one of them lock stock and barrel and established his foundry above. Things now are a bit more conventional. Pete and his children live in a traditional houses but Pete inherited some of his father’s artistic talents and continues to produce bronzes in addition to running a fine bar.

Pete’s son Greg cooks a mean pig - best I’ve had in the islands. Back home we use hickory or oak to cook a traditional pig for a “pig-pickin’” in the islands they use “buttonwood” to produce the charcoal and add green leaves of the buttonwood tree to make smoke and add flavor, similar to how we add “bay” leaves for the same purpose Downeast. Greg’s sauce is a blend of traditional NC and Georgia kind of vinegar base with a touch of “Jerk” seasonings. The result is mmmmm good.

Sunday morning I switched on the computer to check and see if Gigi was a grandmother again - her daughter-in-law, Kristen, is due any second. The “hateful computer” went through the bios boot but refused to go on to boot the operating system. “Oh! Shuck!”, I said ...or words to that effect.

Would you believe it last year, at Little Harbor, the day before Easter, my computer went belly-up - same day, same time, same place one year later. Lighting (figuratively of course) does strike twice in the same place. We boogied back to Marsh Harbor (only place with a computer doctor) on Sunday and spent Monday running diagnostics and trying to figure out what to tell the “doctor” when Tuesday rolled around (Easter is a Friday and Monday holiday for the Bahamas). By Tuesday night my computer was alive and back in action. This is the second time Abaco Computers has saved my bacon.

Next up is a trip over to “Nipper” for a nip and “Grabber” on Guana Cay for a dose of “Brown Tip’s” rake and scrape.” Somebody’s gotta’ do it. 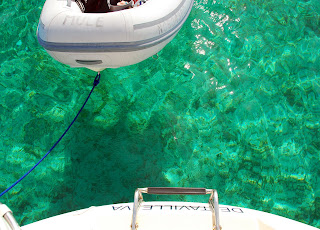 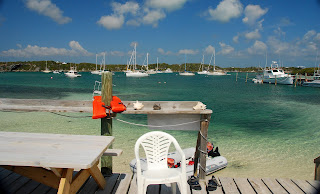 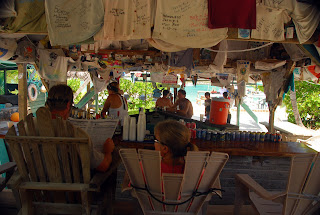