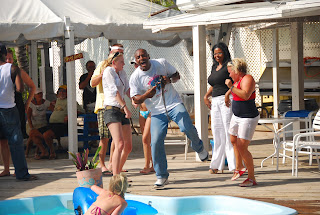 It was a hard beat (into the wind) to Great Guana Cay. There is an old sailor’s saying, “Gentlemen do not cruise to weather.” But sometimes there is nothing like a hard beat into the wind to really get your blood going and today was one of those days. It was a great sail and a perfect set up for the rest of the day. The reason for the trip to Guana was “Brown Tip” and his “rake & scrape” group were playing at Grabbers on Guana Cay and both G and I enjoy “rake & scrape.” The second reason was to do some research. Grabbers was supposed to serve the best Mahi sandwich in the islands (they do, by-the-way).

How to describe “rake & scrape?” Well first it is truly a Bahamian invention, it is original. It is high energy with an islands type beat. In “rake and scrape” music percussion (drums, etc.) are replaced by the common ordinary carpenters saw. The teeth of the saw is “scraped” with the back edge of a butcher knife, and the blade is tapped in time as the blade is warped to produce different tones. It is surprising the amount and variations in sound that a common hand saw can produce in the hands of someone like Brown Tip.

Brown Tip and his crew got cranked about 2:30. Brown Tip by day is a diver (boat bottoms, change props that kind of thing) and in the evening he comes alive as an entertainer. He is a long, tall, black, drink of water, with a winning, smile full of brilliantly white Bahamian teeth (The women love him). Give him a little feed back and he turns into a blur of pure energy and music that will make even an old fuddy duddy like me start moving in places I didn’t think could move.

Once the “frozen Grabber’s” started flowing, Brown Tip swung into high gear (see photos). They were dancing on tables, ladies finding them selves mysteriously in the pool, and then Andrew from the Jib Room in Marsh Harbor, showed up wearing a T-shirt and pair of shorts with “peas & rice” written on the cheeks of his ass. Did you ever see those National Geographic specials about alligators where the old bull’s roar under water would cause the water to froth and boil? Well Andrew has a way of “shakin’” his bootie that will cause a T-shirt to do the same “ting.” Gigi was most fascinated. She just sat there and “giggled.” I ordered another “Grabber.”

After supper back on the boat Gigi and I sat watching the anchors lights across the anchorage in Fisher’s Bay wink on and the stars answer in kind set in a moon less sky. It was the perfect end to another great day in paradise.

Hope Town on Elbow Cay is one of the pettiest of the Abaco islands. It has small narrow streets kept neat and clean, lined with colorful, wood frame homes, set against a back drop of the emerald green of the Sea of Abaco and the blue of the reef speckled Atlantic. The local people are decedents of the Loyalist that fled the States after the Revolution (although they call it a “civil war,” not a revolution). The island reminds me of my Ocracoke Island back home even the old English brogue of the islanders are very similar. They are friendly in nature and always helpful - can you tell I like it here.

One morning on the Cruiser Net, a gentleman named Dave came on during open mic and asked for help burying his neighbor’s dog. We figured that if he asked for help there was a reason. Gigi and I decided we should go - figured there would be a ton of cruisers respond, but as it turned out, no one except us did.

Dave was in his late 60s and his neighbor Mrs. Marie Pender, was in her late 70s. Dave and I dug the grave in her back yard over looking the blue Atlantic and Gigi put her arms around Marie and Miss Mary (her sister) and gave what consolation she could. Marie truly loved Lucky and was quite emotional - Lucky had been her companion for 11 years. Between tears Marie and Mary shared stories of their island with Gigi. Marie and Mary were the daughters of the lighthouse keeper for Elbow Reef Light in the 30s and they both remembered following their dad up the 101 steps to the top to wind the clock like mechanism that ran the light and set the kerosene light ablaze.

Gigi and I had climbed to the top of the lighthouse the day before and taken photos of course. The view is stunning (see pictures). The lighthouse is still lit by a kerosene lamp and still run by the same clock like mechanisms used by Marie and Mary’s dad so many years ago. Lucky was truly a lucky dog to have had Marie for a mistress and Gigi and I feel very lucky to have new friends on Elbow Cay.

That evening we sat in the cockpit having our sundowners and listening to the soothing strains of Pachabell’s Cannon as the lighthouse light was lit, clock wound, and she began her slow rotation with rhythmic flashes in perfect time to the music. I wonder? The sea held the key to all life did it also hold the origins of musical rhythm?

It was a blustery day but it was out of the East. If we stayed in the lee of Elbow Cay we could easily make the run in the dink down to Cracker Ps on Lubber’s Quarters for lunch and do some exploring on the along the way. Cracker Ps is a local pub famous for it’s food and full moon parties (last year I lost my billfold on the way back from one). The Pub was named for a local character named Cracker Pender. Who, legend has it, immigrated in the 1920 to avoid prosecution because he had the misfortune of shooting the sheriff in Washington, GA.

We had a fine lunch. Then made the run back across from Lubber’s Quarters to Tahiti Beach and spent a few hours exploring the beautiful water and pink sand beaches. The shallows are filled with critters, urchins, bone fish, conch (too small to take), and all manner of life. We cruised White Sound, pickup some dingy fuel and started back up the coast hugging the shore of Elbow Cay. In a small cove we spotted a mangrove creek that looked inviting and slowly entered the shallow waters. Just inside the entrance to the cove it widened out to a beautiful, shallow lagoon. Turtles swam just beneath the surface, as if flying in air darting to an fro across Mule’s path. And strung out in front of us like a string of pearl were 4 of the most perfectly restored Winner Malone Abaco Dingys I’ve ever seen (see photos).

As we eased out of the cove on a little point, with steps carved out of the coral stood a bronze life size sculpture of little girl doing a cartwheel(see photo). There appeared to be no way to reach this remote place except by water. Why was is there? We may never know. That’s the thing about exploring if you go look, God or the Bahamas will deliver the surprises.

Monday we are headed for Man-A-War Cay, home of some of the best boat builders in the Bahamas and then back to Marsh Harbor to pick up John Grossenbacher, a friend of Gigi’s, for a week long, island hopping, pub crawl. As the Cracker P says, John, will “leave the rat race and join the conch crawl.” 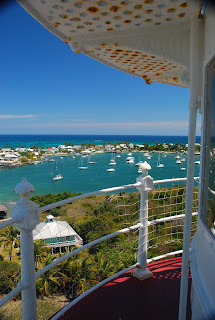 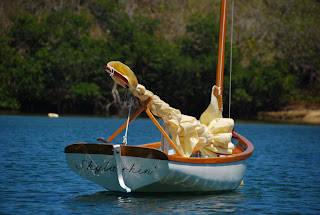 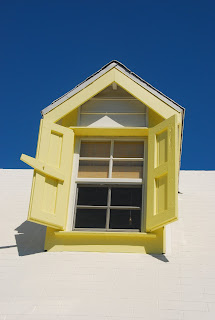 Oh, my! How fine it all sounds! Fair winds to you, Vic!

Browntip is my husband and i m proud to see him perform, he is full of energy and his smile light up the world