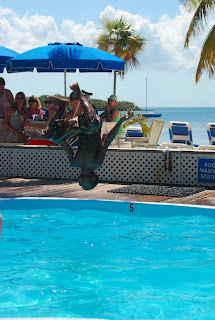 Oh yes, John Grossenbacker’s visit. We arranged to have the taxi drop John at the Jib Room in Marsh Harbor - figured we might as well start John’s crawl out right. The Jib Room, on Saturday night has “Steak Night”with Desmond doing the fire limbo and Jason with Rake & Scrape music. Marvin, the chef at the Jib Room, cooks one of the best steaks to be found - a 1 pound New York strip cooked exactly to your taste, mmmm good.

Sunday we sailed over to Great Guana Cay and had a “nip” at Nipper Bar over looking the Atlantic and then settled into Grabbers on the beach in Fisher’s Bay for lunch and a laid back evening. There was one young Bahamian boy doing “archfull” flips into the pool. John figured he was practicing for the Olympic Bahamian Diving Team and commenced to act as “judge” for the practice session. When John would give him high a score he would beam and flash him a big white “toothfull” smile.

On Monday we beat our way over to Man-a-War Cay and after anchoring took Mule in for lunch at the “Dock and Dine.” Man-a-War is a working man’s island. Here you can get sail and canvas work done. Man-a-War is the home of the great Bahamian boat building traditions that go back for centuries. The Aubry’s still build quality boats here but have moved on to fiberglass. However, if you want wood it is still available, as witnessed by the photo of the raw knees and ribs soaking in the harbor waiting their day to become part of a some sound wooden boat.

Man-a-War is unique among the islands in that it was founded by Methodist. It is still very religious and is a “dry” island. The only other island I know of that is similar is Spanish Wells. The island is clean, neat, full of flowers, and friendly industrious people. Everywhere you look there is a quite lane with colorful houses painted an array of bright, heart lifting, pastels.

While in Man-a-War we were lucky enough to meet Sammy Aubry. Sammy, like most island men is a boat builder, in his 64 years of life he has built 18 boats. His favorite is the “Thrice Mine” - an 18', outboard powered, runabout. Why the name? Sammy will be happy to tell you the story. As he says in his old English brogue, “Caus Ioo owned her three times.”

Sammy built the boat as a young man in the 70s. While it was still sitting in the yard a man from the States strolled in, saw the boat, walked twice around her, got out his check book and she no longer was Sammy’s. Ten years later Sammy heard the boat was for sale and he brought her back (are you keeping count? That’s two). Well Sammy kept her on a mooring in the harbor off his dock. One night during a storm the “Thrice Mine” decided to go “walkabout” and when Sammy got down to the harbor the next morning all that was left was a frayed mooring pennant floating in the water and no boat. A week later Sammy got a call from the Bahamian Defense Force in Nassau. And guess what, they had picked up the Thrice Mine, off New Providence island almost 100 open sea miles south of Man-a-War Cay. Sammy brought her home and re-christened her the “Thrice Mine.”

After lunch and a good walkabout on Man-a-War we hauled anchor and rode the rising tide into Hope Town on Elbow Cay about 10 miles South of Man-a-War. We need to play the tides going into Hope Town. At dead low there is only about 5 foot of water and Gigi’s Island draws 5.5 feet.

We spent 3 days in Hope Town giving John the “full” tour. As you know from a previous post, Hope Town is one of Gigi and my favorite spots, with its flowers, majestic light house, good food, and secure mooring field. We took John on a Mule ride to Lubbers Quarters and Cracker Ps for lunch and for a walk on Tahiti Beach. Then poked our nose into what G and I call “Turtle Creek” the home of those salty Winner Malone sailing dingys you saw in the last post and...turtles flying around Mule’s bow. Then ended the day with a swim and a snorkel around the point with the bronze sculpture of the little girl doing a cartwheel.

While snorkeling, John and G met a nurse shark. I was swimming back to get Mule to pick them up at the time and missed the experience. By the time Mule arrived John “loud” as how he was ready to get in the boat. Despite the shark John loves Hope Town as much as we do.

On Thursday we slipped our mooring in Hope Town Harbor with the intent of sailing south to Little Harbor and Pete’s Pub. On the sail down we were hailed by some new friends we had met in Hope Town, Rob and Laura Stevenson on Arita - a 50' wooden boat built in New Zealand from a single cowery tree. Rob is from Sidney ( a true Aussy, mate) and Laura is “the Queen of Florida” (or so Rob says). They were nice enough to take the photos of Gigi’s Island under sail. It’s not very often a photographer gets a photo of his (well G’s ) boat under sail. It was very nice for a change.

When we got to Little Harbor there was the surge from hell that made it impossible to put the engine on Mule (The Island can only get in Little Harbor at high tide). We sailed back and anchored in the lee of Lynyard Cay. Rob and Laura anchored near by and brought the photos of the Island over. After a bit of a gam we talked them into joining us for drinks and a movie ...and they brought the movie.

I don’t think I’ve explained how we handle movie nights aboard the Island. Gigi’s computer is set up on the companion-way hatch facing aft, and external speakers attached. That makes room for 4 to 6 folk to see the movie in relative comfort.

We had a great sail back to Marsh Harbor on Friday. The Island and her crew ended John’s “crawl” with an evening at Mangos with Brown Tip and good old “rake & scrape.” John exited the “conch crawl” for the “rat race” back in the States on Saturday. John you are great crew and we miss you.

We made the passage around Whale Cay to Green Turtle on Monday and are currently anchored off New Plymouth, Green Turtle Cay. Today is the ending of one journey (our winter voyage of the Bahamas) and is the beginning of another (our journey home to North Carolina). It is a sad and happy day. With a little luck and good weather, we will make the crossing back to the US late this week or early next week. Our plan is to ride the Gulf Stream as far North as weather will allow and then clear customs in either Canaveral, Fernandina Beach, or Charleston. 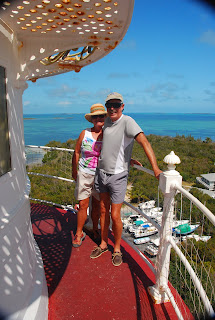 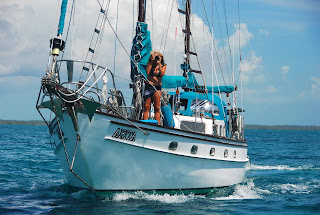 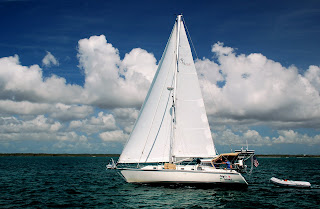