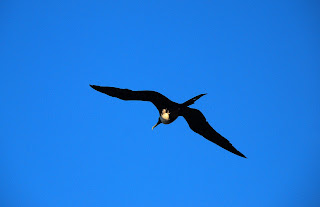 The “Island” was anchored in White Sound, Green Turtle Cay. The morning broke bright and clear with an ESE wind at about 15ks with plans to take the Mule over to New Plymouth and spend a pleasant day exploring one of my favorite towns in the Bahamas. Then we listened to Chris Parker, the weather guru. It looked like we had a good window to make the passage to St. Mary’s, Ga, but not if we waited until the next day. New Plymouth would have to wait ‘till next year.

We had a pleasant sail down the banks and were off Great Sail Cay by supper time (fixed one of G’s favorite meals - chicken in a wine with mustard sauce over rice). Gigi had the 9 to midnight watch and I retired to get a few winks. There were thunder heads all around but the Island seemed be living a charmed life for the moment and none were coming our way. At change of watch we were about an hour from leaving the Banks and Gigi took my place in the bunk. Just as we were leaving the Matanilla Shoal (edge of banks) the moon erupted from the sea between two huge thunder heads. It was like watching a volcano with a deep orange and red moon spat out the top of the clouds.

We hit the Gulf Stream at 3:00 AM and things went from sugar to shit. The seas were supposed to be 3 to 5 from the South but were very confused and instead of the predicted 3 to 5 they were 5 to 8 footers. Eight foot seas are “doable” in relative comfort but the “confused” made it miserable. The boat would handle it but it’s inhabitants were being thrown all over the place - sort of like a punch drunk prize fighter taking round house punches, a-left-then-a-right, a-left-then-a-right. Not fun and hard on old bodies and gear. We hoped when we altered course to St. Marys it would be better. It was worse... much worse. We chucked our plans for St. Marys and altered course for Cape Canaveral, 70 miles to the NW.

By sunup we were approaching the Eastern edge of the Gulf Stream the seas had organized themselves into a nice SE swell. We eased into Canaveral planning tie up at a marina, clear US Customs, and crash. The cruising community is small and we were met at the dock by John Stevenson, a single handler we met in Marsh Harbor of “Sarah” fame. We were too late to clear in so we just crashed and met John for supper later. He told us that Customs when he cleared in confiscated all his vegetables and meats even his prepackaged meats that had been shipped into the Bahamas from the States. Since Customs did not know we were there and we still had good weather...why tempt fate? We left the next morning for St. Mary, GA, keeping company with John in “Sarah.”

The Island and Sarah headed off shore Saturday morning sailing for the entrance of the St.Mary’s river and Fernandian Beach, FL., about 150 miles North. The trip was as good as it gets - gentle southerly breezes and following seas. By 10:00 AM on Saturday we were off Fernandina. Since US Customs does not work on the weekend we decided to anchor behind Cumberland Island, enjoy the sights on Cumberland, and move down to Fernandina late in the day on Sunday.

John joined us for supper. Then we all crashed early to catch up on some sleep. I’ve said it many times Cumberland Island is one of the most beautiful places on God’s earth. Where else can you have live oak canopied lanes, wild turkey, Spanish horses, salt marshes, and an 18 mile beach almost to yourself. The Park Rangers and guides make the island history and lore come alive. Our Ranger had been living and working on the island for close to 30 years and still gets excited helping to tell it’s story. I love Cumberland.

Back on the boat we hauled anchor and headed for Fernandian just ahead of weather...again. We ended up at Amelia Island Yacht Harbor about 3 miles South of Fernandina just ahead of a front. Amelia Island Yacht Harbor is very protected but maneuvering is also very tight. Good Old Vic, broke one of his major boating rules, “Never put yourself in a position where you have to use seamanship.” I made a wrong turn down between two piers. With cross current and cross wind the Island had to be turned around (she does not back) and motored back out of what I just got us into. Gigi’s Island is about 45' in length with bow pulpit and dingy davits and the fairway between the piers was about 47' - had no time to be figure it out just time to rely on instinct. I backed and filled the Island turning her in her own length, ricocheted off a piling, and just managed not to hit a single boat...but I did put a scratch in Gigi’s gelcoat from a U bolt on that damn piling. It was one of the best pieces of boat handling I’ve every done even if I did hit something. Luck counts.

After we docked Gigi called Customs and arranged for them to come clear us in Monday morning.

Over the winter, I read the biography of Mr. Evans W. Cottman, “Out-Island Doctor.” He taught high school chemistry in Indiana for 30 years and then moved to the Bahamas in the 1950s. Note I called him “Mr.” not “Dr.” The Bahamas had such a lack of doctors at the time they would licence almost any person with a scientific back ground to be a “practicing” doctor. When Mr. Cottman landed at True Blue, on Crooked Island he was the first “doctor” the island had ever seen. The local constable literally took him door to door, knocked on the door, saluted, gathered the people within, and announced, “De doctuh he done reach!” Translation, “The doctor had arrived.”

We are currently hold up at Amelia Island waiting for the weather to clear. It has been blowing a bloody gale and raining sideways for the last 3 days. These conditions are expected to continue unabated until late Thursday. We have had 9.6" of rain over the last 24 hours and that does not include Monday or Sunday. As I write the boat is heeled over 15 degrees in the slip from the wind and it sounds like someone is throwing buckets of water at the boat...I think I’m growin’ webbed feet.

We hope to get out of here on Sunday (after the seas have calmed down) and head back off shore for Southport, NC, about a 270 nm to the North...if we don’t get blown away or drown first. 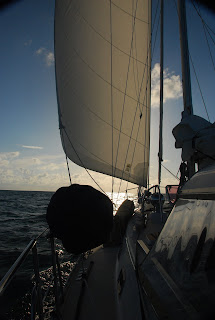 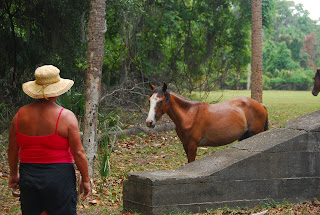 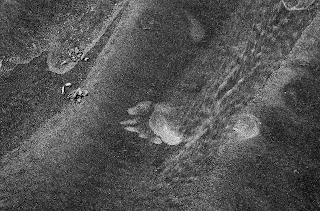 Vic - welcome almost "home". Thanks again for the colorful description of your journey and he terrific photos. We have been using your images for wallpaper since we first followed your blog. I love the footprints in the surf. take care of the rest of your voyage.
Slainte,
Jim and Sherry
Beltane
Matthews Point Marine