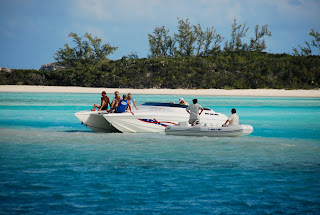 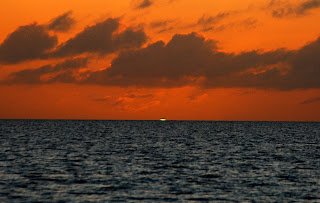 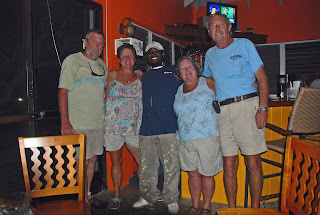 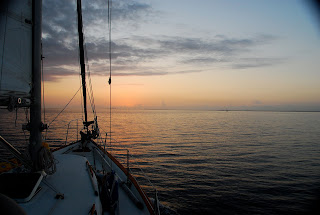 Oconee is at anchor snuggled up to the western shore of Sampson Cay. Sampson is shielding us from a brisk ENE wind of about 25 knots. As is my usual routine, Gigi has just finished listening to Chris Parker and writing down the weather “guesses” for the next few days (we live by weather) and I'm sitting in the cockpit, sipping coffee and watching the day come alive. And it's a dismal one with gray scudding clouds, squalls, and winds in the 25 knot range. Poor weather is not all bad it has given me time to reflect on the events since our last post – a perfect passage to Nassau, a not so perfect passage to Norman's Cay in the upper Exumas, conching and a green flash, a perfect asshole in Sampson Cay.

We passed a pleasant few day in the company of Ron Linginer in Ft. Lauderdale. Ron, as usual, was a gracious host and, I might add, a good friend. Then moved on down the coast off shore to No-Name-Harbor, on Key Biscayne, Fl, in company of Cat's Paws, with Mack & Shirley MacVean to position our selves for the crossing to the Bahamas.

The passage to Nassau was so good you should be envious.  It was positively one of the most beautiful 26 hours I've ever spent on the water.  The Gulf Stream was a piece of cake almost flat and only held us in it's grasp for about 3 hours.  We went thru schools of Portuguese Man-A-War all with sails set heading god knows where.  Pods of dolphin jumping, arching, tail walking and swimming with the boat.  Flying fish skittering across the waves. And the icing on the cake was the Navy blue of the Gulf Stream set against floating rafts of gold Sargasso weed.

Cat/Gun Cay Cut that led us on to the Banks was a little of a “pucker” but certainly doable.  You approach Gun Cay and go within 50 feet of shore.  Then hard right for about 500 yards till the water is deep and blue.  Hard left following the deep water thru the cut.  Hard right onto blue green water of the banks following curve  of Cat Cay's Southern shore. Continue for about a mile and then you are home free and headed for Tongue of the Ocean 60 miles away.  And yes no marks.

The night on the Banks was magic. The sky was so clear and the water so calm it was hard to draw a line between where water and sky met.  And the bow wake was creating "stars" of it's own in phosphorescence almost as if answering the beauty of the heavens.

The Tongue Of The Ocean and N.W. Providence channel were like glass....and they usually woop my butt.  NW Providence light (yes light and it was working that night) was a zoo of ships but that's normal.  We were approaching Nassau just as the sun crept up over eastern horizon. Oconee cleared in with Nassau Harbor Control and by 8:15 AM we were tied up at Nassau Harbor Club waiting on Customs and Immigration to clear into the Bahamas. The Customs lady was nice, the Immigration man was drunk and an pain in the butt. This 26 hour passage will live in my memory for the rest of my life.
Passage to Norman Cay in the Upper Exumas:

For every ying the is a yang and I knew the cruising “gods” would exact a toll at some point...I just didn't know it would be so soon. Oconee and Cat's Paws were not in Nassau long. In my opinion, Nassau is a place to clear into the Bahamas, re-provision (read buy rum), and get the hell out as quick as possible. Nassau is not the Bahamas - filled with crooks and politicians (but I am being redundant) and is the exact opposite of most of the rest of the Bahamas – friendly, helpful and safe.

On Sunday we headed for Normans Cay about 40 miles across the banks with about a 3 mile stretch of water known as the Yellow Banks about mid-way across. This particular uninviting stretch of water is sprinkled with black, ugly, coral heads just below the surface – not really a problem in good light but you must pay attention.

Just as Oconee entered the Yellow Banks the engine shut down. G and I got it re-started. Two minutes later it shut down again. My attention went from coral to engine very quickly. We radioed Cat's Paws on the VHF and asked her to be our “eyes” while we focused on keeping the engine running. All I wanted to do was get thru the coral and then I'd “lie-a-hull” (stop the boat) and dig into the engine. It was not to be. After about the 20th re-start it died and would not relight.

We put Oconee under full sail and beat our way out of the Yellow Banks with Shirley acting as our eyes for coral. She was a great help it left us free to sail the boat. When Cats Paw announced we had cleared the “heads” I shut down the boat and checked the fuel filter. The filter was OK but there was just enough air in the head of the filter that when we fell off a wave the engine would get a “gulp” of air instead of fuel. I cleaned the seals on the filter and refilled the filter with fuel. Problem solved.

About 2 miles out of Normans Cay I noticed we were quickly catching up with Mack and Shirley. He had shut his engine down with over heat problems – his alternator belt that also drives the water pump had disintegrated. Oconee took him in tow and were soon snuggled up to the West side of Normans Cay at anchor. Mack is a master mechanic and had soon figured out it was just an old belt...but the belt when it few apart did just as “Murphy” would have predicted. It hit the coolant overflow tank and cracked it. Mack replaced the belt, and calked and duct taped the tank – back in the saddle again.

Norman's Cay is an interesting place. Once the center of cocaine smuggling for the Bahamas, it is now a private island complete with bar, MacDuff's Bar and Grill, centrally located just off the end of the airport runway – easily accessible off the beach by dink or by plane...and the “puddle jumpers” fly in often just for lunch. Normans is shaped like a horseshoe with a shallow lagoon complete with the skeleton of an old C-47 that didn't quite make the runway during the peak drug days. Today it has great for conching.

The crews of both boats love conching ...and conch. It took more time to get into the lagoon by dink than it did to take our limit of legal conch – the limit is 6 per boat, by the way. After cleaning the conch we settled in for sundowners and what was going to be a gorgeous sunset. G commented, “this might be green flash territory.” I got the camera. We moved to the cabin top for an unobstructed view, sipped, and watched. The horizon was absolutely clear. As the sun slowly sank beneath the sea, I pulled the trigger on the old Nikon and just held it down letting it fire a series of photos just as the sun turned from yellow to green. ….And I got the whole thing on pixels (see web photos for the whole sequence).

There was a Westerly blow coming and anchored off the western shore of any cay is no place to be in a West wind. We headed for Sampson Cay Club and Marina to “hide” until the blow was over. Sampson is usually a peaceful place to wait out a blow complete with nice restaurant and bar (excellent Rum Punch Sampson Style). This time was a little different...at least for 2 days of the stay until “The Asshole” left.

There was this obnoxious German mega yacht owner. He treated the staff at Sampson with contempt and complete disrespect. No one mattered except him and his needs. His yacht was complete with all the toys including a BBBig ocean racing type boat equipped with twin large diesel engines as a dink. This particular Sunday morning he cranked the engine at 8:00 AM.  You could not hear yourself think in the marina. He literally shook the lady in the sail cat behind him out of her bunk. She came on deck in her “jammies,” stood on deck with her hands over her ears. Did that phase him? Nope, he sat on deck drinking his coffee and glared. This guy was a real shit.  Probably the biggest shit I've met over my years on the water.  The only good part was he had toasted the engines 2 days ago trying to get off a sandbar in the lagoon.  Why he though he could run the boat in ankle deep water I'll never know.  He at least had good entertainment value.  Everyone watched and no one made a move to help (I compromised and took photos). It is rare among cruisers to not instantly go to the aid of someone in trouble. We made an exception for The Asshole.

When he cranked this morning it was to see if the damn thing had experienced some sort of miracle cure over night.  I should say the engineer cranked while The Asshole sat and watched.  When he finally shut it down there was a cheer that went up throughout the marina with echos of "asshole" reverberating thru out.  Didn't phase the shit one bit...the good news was his transmission only ran in reverse, the engines were belching blue smoke, and there was only a trickle of cooling water laced with steam.  There is some justice in the world.

We plan on staying anchored off Sampson until after Christmas (they have a great Christmas Dinner).

Merry Christmas to All,

PS – I'm thinking of doing a short post on Christmas day. Keep an eye out.
Posted by "Gigi's Island" Days at 10:50 AM

Merry Christmas to you both! Great photos, as always!