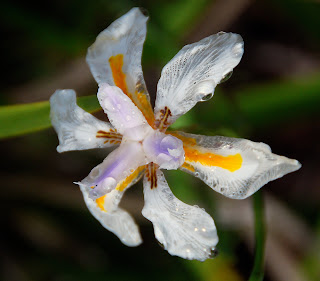 We spent a wonderful early Thanksgiving tied to the dock at Palm Coast Marina. Palm Coast was like old home week for us. Steve & Aggie, off Nellie Bly, a couple we met in the Bahamas last year were spending some dock time doing “work” penance to rebuild their cruising kitty. Then Pretty Penny arrived with Bob and Penny, friends from Sampson Cay last year. Pretty Penny is a 52 foot motor cat that looks like an “aircraft carrier” when viewed headed down the ICW.

Tom and Olga, Gigi's cousin and wife, arranged an early Thanksgiving dinner for us on the 16th. We arrived at Toms just in time to see the Space Shuttle launch. Seeing a launch has always been on my “bucket list” - I got pictures

Palm Coast is sort of a neat place. It has miles and miles of walking trail. Lots of community activities and Piazzas, one of the best Italian restaurants I've ever eaten at...and cheap too. Piazzas is a “different” place. The owners and waitstaff are all dressed in black that looks like it came right out of the Blues Brother..or maybe the mafia. The night before we left G and I went by for dinner and stopped to tell the owner we would seen him next year. This guy is short, muscular, 50ish, jet black hair, with dark brown eyes and all Italian. He reaches up, cradles G's head between his, huge hands and gently kisses her on both cheeks. This man knows how to do business....and G loved it.

I've always been a bird lover – I share this love with my brother Ronnie. In truth it was he that first sparked my interest in the almost infinite variety of birds. Ronnie helped me see that for every environ there is a species of bird that exploits it. Palm Coast is made up of low county with a labyrinth of canals, tidal marsh, and mangrove. It is a country built for Ibis. Almost everywhere you see flocks in flight or groups poking about the marsh or mangrove. On occasion you see one walking like god's clown down the middle of the road. It's then you realize how well designed these bird are to exploit the marsh. Their outsized feet remind one of the mangrove roots they feed among with toes designed to spread the load over the water laden earth. Their curved beak is a perfect tool for probing the marsh for food. It is a design perfect for it's habitat but on a hard surface road it sure does look the odd bird out.

Old Vic came to Palm Coast with 4 acquaintances and left with 4 new friends. Friendship and Thanksgiving have always been linked in my mind and after this Thanksgiving even more so. We parted Palm Coast on the 19th headed for Vero Beach to get the dingy engine gone thru before we made the jump to the Bahamas. The hard part of cruising is you are always leaving friends behind. The good part of cruising is new and old friends are only an anchorage away.

Mosquito Lagoon is a wide open and shallow. It is just north of Titusville and Cape Canaveral – you can see the space shuttle launch gantries as you sail south. Usually this is a place to “get thru” but not this trip. It was a highlight. The wind was north and it actually gave us a sail (well motor sail) and some new friends, a pair of dolphins joined us and swam close to Oconee's quarter wake (right beside the wheel) for almost 20 minutes. Usually when you grab a camera the dolphin do a disappearing act but not this time. For almost 30 years I've been trying to get good photos of dolphin. This was my day. It was almost like they were posing for the camera. Mosquito Lagoon gave me another check mark on my “Bucket list” - get good photos of dolphin.

We anchored for the night off a small island near Palm Bay about 15 miles north of Vero Beach. Cooked a supper that could not be beat and settled into the cockpit with an after-dinner cocktail in hand. It was an absolutely clear dark night with just a sliver of a moon and stars splattered across the sky from horizon to horizon. The Space Station was supposed to be visible at around 7:06 PM and we wanted see if we could catch a glimpse as it passed over from the northeast to southwest. Right on cue she winked on, passed quickly over head with its steady firefly hued glow, and blinked out in the south as she passed in the wake of the earth's shadow. By noon the next day Oconee was rafted to Cavalier (Al and Jan Sullivan - new friends) in the Vero Beach mooring field.

We used Vero to finish our re-provision for the Bahamas, get the dink engine a good tuneup, wait mail, and relax a little. This year we just happened to be here on the real Thanksgiving Day and Vero does it right with a pot luck for over 200 cruisers, music, and a flea market. And all just a short dink ride from the boat. The beauty of this type get together is the “diversity” (to use a overly used word). In the mooring field were boats from all over the world: almost every state in the good old USA, France, Canada (of course. I don't think there is anyone left in Canada), Germany, and many more. Everyone bringing their favorite foods. And again, Thanksgiving brings a time for renewed and new friendships...

Oconee and crew headed south on the 27th for Lake Worth. Gigi and I had had our mail shipped there. You know you are in South Florida when curly tail lizards scamper about as you walk, every community is “gated,” English is a second language, boaters have no concept of courtesy (unless it's the Cuban macho brand), and you have to lockup everything that ain't nailed down - even have to lock the dink to the boat at night.

Oconee left Lake Worth late on the 1st of December with the idea of getting as far south as possible to make the next days run to Los Olas Marina in Ft. Lauderdale as short as possible - 19 bridges makes this a pain in the butt. And any of you that follow in our wake do not make this run on the weekend. Most of it is a narrow walled canyon of zillion dollar homes and condos. Any boat wake reverberates off the walls making for endless wakes and a miserable trip.

We anchored for the night in a little pocket of deep water literally right off town of West Palm Beach. What a beautiful spot and we had it all too ourselves. We kept waiting for the cops to show up and run us off but no one bothered. In the middle of the night the wind built to 25ks and shifted to the southeast...shit! That nice anchorage turned to a rough as a cob. The wind built the seas to 2 to 3 feet and the current laid the boat ass to those seas with the anchor stretched out behind the boat. Usually when wind and current fight to control the direction of the boat it is no contest, current wins, as it did that night. It's sort of like trying to sleep on a roller coaster with the waves making a bass drum out of the stern and you inside. Not fun! Little sleep! We left a first light.

The good news was because the weather was lousy there were few “Florida Crazies” on the water and the canyon actually worked to our benefit by knocking down the waves and shielding us from the wind. Again for those of you that follow in our wake, if you run this area of the ICW the bridges are timed opening. You need to run at least 6.5ks to make the bridges on their schedule or you will spend a lot to time holding in place at the bridges.

Most bridge tenders are pleasant and professional but then there are those few... Of the nineteen we faced that day only 2 will live in infamy in the hearts of Oconee and crew - the Ocean Ave. Bridge & the Oakland Park Bridge. As we approached the Ocean Ave. bridge there were 3 boats in a line with Oconee the caboose in the train. I was close enough to read the name of the boat in front of us...and that is close by any standard, when the bridge tender says, “can't wait on the sailboat in line gotta' open for traffic.” And he closed his span and Oconee waited a half hour for the next opening. We would have cleared the bridge only minutes behind the last power boat. Shit!!

It had been long, wet, tedious, day on the water as we approached the Oakland Park bridge, the next to last bridge in the string. It was only 3 miles and one more bridge until we would be tied securely to a dock, beer in hand, and looking forward to a nap (remember last night gave us little in the way of rest). G called the Oakland Park bridge tender to make sure we would be included in his next scheduled opening. No answer. Called again, no answer. Called yet again, NO Answer! Called a 4th time Still NO FUCKIN' Answer! Oconee and I did a not so dainty about face, circled and approached the bridge again (slower this time). Again the closed bridge forced us to do an about face . The the VHF came to life “do you folks want an opening?” As calmly as G could she responded, “Yes and we called you 4 times.” Now we have 3 miles to go to make the scheduled timed Sunrise Bridge opening and only 20 minutes to do it. We got there 5 minutes late and had to do “round abouts” for 30 minutes. Dock, Beer, Nap, and Showers had to be put on hold...damn it! Thanks to a bridge tender that was probably taking a nap of his own.

By 3:00 PM we were tied up next to “Cats Paws” and our friends Mac & Shirley and were settled in to a berth at Los Olas Marina. Early next week Oconee will make her way south to Key Biscayne, take on fuel and water, and prepare for the jump across the Gulf Stream to the Bahamas. The ICW charts are soon to be put away 'til spring. The Bahamas charts are already dug out and being pored over to set our course for the crossing. It looks like it will be a Christmas in the Exumas and a New Year Day Junkanoo in Staniel Cay in store for Oconee and crew. We are excited.

PS – Voyages seem to have themes they develop on their own. This one seems to be “friend – new and old.”

PPS – For the first time Gigi contributed to our photos. Can you tell which are hers? 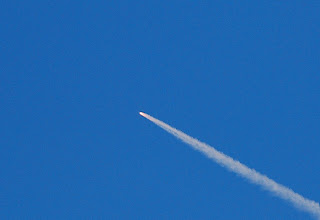 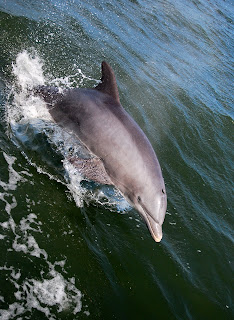 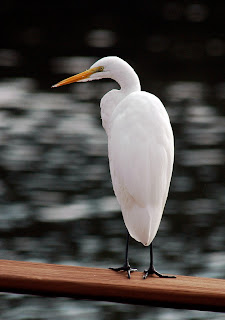 Nice Photos from both of you! Bummer that we didn't know you were in Lake Worth. Beth was there getting her dad settled in his condo for the winter.