“Remember The Bridge Opens On the Hour and Half Hour...”:

Remember the persistent scupper hose leak? Well it was still with us when we got to Beaufort. We moved the boat into a slip to make things more convenient to fix the hose and a half dozen other thing Oconee insisted I fix. I left the “hose job” to last since since it require me to assume the shape of a pretzel to even get to it. I hauled everything out of the quarter berth, grabbed my bag of bits and pieces needed to fix the problem (bits and pieces I'd spent half a day in Charleston chasing down), and inserted myself upside down into the quarter berth. I'd bought the WRONG “bits & pieces” - 1/4” too big.

Nancy, one of the folk that ran the marina, called her husband, Hank, that worked at the hardware store on Ladies Island just across the bridge on other side of the ICW. Hank had just what I needed. The Marina had a courtesy car they would loan you for one hour and it was available. Problem solved.

Perhaps I should tell you a little about ICW bridges. Usually they open either on request (get to the bridge call them and they open) or on a fixed schedule like Ladies Island Bridge (hour and half hour). Normal procedure for fixed schedule bridges is you give them a call on the radio as you approach, they acknowledge your existence, and you are included in the next opening. If no boat is at a fixed schedule bridge they don't open. I've heard of some that didn't open even when a boat was there simply because they did not call the bridge but...

Back to the story... . I jumped in the car and traffic was just bloody awful. It took 20 minutes just to get across the bridge to the hardware store. Hank was great. In 5 minutes I had what I needed. Hank even volunteered to modify some parts for me if needed ( I love SC folk they are great). The power went off just as I approached the register. No power, no can pay. That took 10 minutes to fix. My hour clock is ticking and the traffic is still bumper to bumper – Atlanta has nothing on Ladies Island for traffic at least. I jumped in the car, wove my way thru the parking lot and inserted myself into a side street with a light and a turn lane. Three cycles later only one car had made the turn. There was one guy that just would not poke his nose into traffic and everyone was having to go around him. It took 10 minutes to make the turn. The traffic is bumper to bumper all the way to the Ladies Island Bridge but it is moving. I've got 10 minutes before that damn bridge open. I can still make it and be within my hour's limit.

The wheels of the car are actually on the bridge with seconds to spare...I ain't gonna' make it. I look up river and then down river and there are no boats...I got this one in the bag. The tender sound's his siren, the gates come down and the bridge opens. He opened that damn bridge for NO ONE! I'm doomed – never seen a bridge open for no one.

Nancy's voice is ringing in my ears, “Remember that bridge opens on the hour and half hour...” It sure does boats or no boats!

And Port Royal Sound Spat Us Out..:

We had planned to leave on Tuesday for the trip off shore to Fernandian Beach, FL. It is about a 125 mile trip out Port Royal Sound, down the Georgia coast and in the St. Mary's River to Fernandina. For Oconee that means about 22 hours and an over night voyage.

We left at 11:00 AM, that gave us the advantage of having the tide with us. G and I had figured it would take us about 3 hours to reach the sea buoy at the entrance to Port Royal Sound and make the turn down coast. We had not figured on the tide and the current Port Royal and full moon could give. We made 9 knots down Port Royal Sound and by 1:30 PM it has spat the Oconee out into the Atlantic Ocean like a watermelon seed between the fingers of a young boy. I'm glad as hell Oconee did not have to push that current. By 3:00 PM we were off Tybee Roads, the entrance to the Savannah River, and wallowing our way south at close to 7 knots.

We were treated to flocks of Northern Gannets diving for their supper. Gannets are open ocean birds and come to land only to breed. The Gannets put on a show, folding their wings tight to their body as they disappear below the surface of the water in their quest for food.

It was one of those rare cloudless days and we were lucky to see both a beautiful sunset and blood red moon rise. A clear sky at sea is like none other. You feel like you are part of the universe not just living on the fringes of it. It is a feeling city life can not even approach.

We spent the rest of the night slowing the boat down. Oconee and her crew did not want to enter the St. Mary's River in the dark. We hit the St. Marys just before dawn and spent about 30 minutes waiting for enough light to enter. By 8:00 AM we had the anchor down in Bell's River off Fernandian Beach, FL. We celebrated with a “Bloody Mary” and crashed for a well deserved nap.

When I asked G what she wanted to do on her birthday she said, “Go to the farmer's market in Fernandian.” So that is just what we did – bought some veggies, locally made olive tapenade, and spent a pleasant day roaming the streets (read shops). We had a great lunch at one of G's favorite restaurants, 29 South, and the town even had a parade in her honor. It might have been because of Veterans Day but I choose to think it was for G. G and I both had a good time. G even let me have a drink at the Palace Saloon, the oldest tavern in FL. The Palace has been in existence for over 100 years. It's Pirate's Punch has been made by the same receipt for over 95 years and is still mixed in the same 55 gallon drum and served like a draft beer, on tap.

We had planned to go up to Cumberland Island and spend Saturday and Sunday but Hurricane Ida changed our plans – we boogied for Palm Coast Marina and a secure place to hunker down incase she decided to come our way. Here we will have an early Thanksgiving Dinner with Gigi's cousin Tom and his wife Olga, gam a little with some friends we met last year in Royal Island, and do a little re-provisioning with help from Tom, Olga, & Steve and Agie off Nellie Bly.

PS: Gigi took the photo of me in her reading glasses – says it makes me look “metrosexual” whatever that means. I'm not so fond of it but there it is, what can I say.

PPS: The photos of the sunsets at Beaufort were so spectacular I could not resist publishing more than one. Hope you enjoy them. 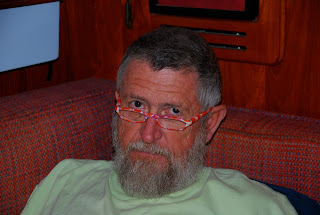 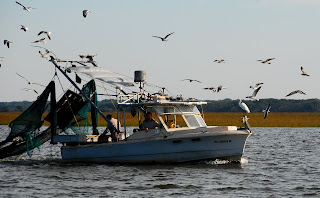 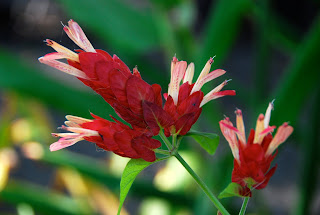 I like the glasses! And one of your sunset photos is now our desktop background. Thanks again for the post. Fair winds to you and G. Oh, happy birthday G!

Nice post, Vic. BTW, I enjoyed the Blackbeard book and have sent it on to . . . to your friends whose names I forget just now.

Sailor, the only thing metro about you is when you go into town for provisions! Great photos, and blog. Take care.

I really enjoy reading your blog....your sense of humour and decorum are amazing! Since changing meds...I find my decorum approaching that of yours finally!!! Otherwise, I would be a serial killer in the islands when confronted with "entertainers" such as you so finely discuss!

I will look for you on your return to the "real" world!

Odds are I will be in the Osprey Marina near Socastee, SC.