Let me start by saying this is “Oconee's” year. It's her year to go south and “Gigi's Island's” turn to sit, not so patiently, at Matthews Point waiting for our return in the spring. Boats are like women they don't like it when you run off with another boat and will extract their “pound of flesh” when you return to them.

Gigi and I had prepared for this and brought her “jewelry” - new hatches and a complete canvas enclosure for the cockpit to spiff the old girl up a bit. I spent all summer getting her ready: did her teak, cleaned her from stem to stern, fixed numerous problems she had saved for me but, unknown to me, she was not quite thru slappin' Old Vic around.

We had planned to leave on Monday, the 19th of October, but an unusual stent of cold weather left us snuggling up to the “electricity” so we could have heat for one more day. The next morning “Skat” and “Oconee” cut their dock lines and headed out bound for Swansboro. Skat and her crew, Jim & Barb Thompson and their dog Missy, will be traveling in company with Oconee for a time.

It did not take long for Oconee to show us who was in charge. The bilge pump kept coming on. The source was the deck hose from one of the deck drains. Oconee is so loaded down with “stuff” (that 10 cases of beer is an essential) the scupper drains are below the water line when we really power her up and they leaked like a sieve. We backed off a few turn on the engine, cleaned the anti-siphon valve on the bilge pump and the problem was under control (we'll fix it when we get to Wrightsville Beach or so I thought). I was no sooner back on deck when the tack on the engine went nuts – no real problem I know what 1800 rpms sounds like. I'll check the connections when Oconee comes to rest tonight.

Time for that second pot of coffee... Below at the sink cleaning the french press in prep for the new brew, Oconee stopped her sink up just for me. So thoughtful. The old “hand plunger” trick fixed that (at least I can fix something). What's that I smell? Oil? Yep, oil. The pan gasket bolts had loosened up again. This has been a recurring problem with this engine. But she had not done it all summer. Why now? I'll fix it in Wrightsville. Oh well that's sailing.

The trip from Swansboro the next day was a record for us. There are 4 swing bridges between Swansboro and Wrightsville Beach and only one opens on request – the rest open on a fixed schedule. A schedule that usually does not correspond well with the speed of a sailboat (power boats make em we don't). Today the fates were with Skat and I we hit every bridge dead on time with virtually no waits.

Needless to say our stay at Wrightsville Beach was spent fixin' problems....or so I thought. The bilge hose leak was to linger. That was the bad news. The good news was I had had a deck leak when it rained hard in Oconee ever since I own the boat. I now knew the origin of that leak – that damn bilge hose had a small split in it under the hose clamp. I'll fix it in Charleston.

With the exception of running aground 4 times the next few days are defined by a little nostalgia and one beautiful anchorage after another. I didn't run aground once last year but have already done so 4 times this year and all but one my fault. Admittedly I was in the channel 3 of the 4 times but if I had been focused I would not have looked so stupid. Oh well....

The Sunset Beach bridge it the only cable operated pontoon bridge left on the east coast of the US and maybe in the world for all I know. It is a throwback to a slower paced time. A time before runaway condos. A time where most beaches were family beaches. My family spent our summer vacations at Sunset in the company of my Sister-in-laws family and other good friends. Our children grew up there. We learned to castnet for shrimp and to slow down from the hustle of work here.

This will be Oconee's last trip thru the Sunset Beach Bridge. The old lady will be replaced by a highrise by the time we return next spring. As we passed thru for the last time I leaned out of the cockpit to personally thank the bridge tender for the opening and let him know I would miss “his” bridge. He nodded and with a slight down cast look said , “Me too.”

The next 3 days of the Charleston leg of the trip was defined by the anchorages – all beautiful and all different. Calabash Creek actually defines the boarder between North Carolina and South Carolina. It is adjacent to Little River Inlet. You anchor in the bend of the creek, lined with trees and small sand beaches. The opposite shore is a curve of sloping oyster shell banks of white and silver with a hint of pink. Stir into that scene the warm light of a setting sun, a little music, a friend or two, and sundowners and you have a small piece of heaven.

Cow House Creek could not be more different. You turn left off the Waccamaw River and enter the narrow cut into the creek. The Waccamaw is an old, bendy , cyprus lined river that snakes its way thru South Carolina from just below Myrtle Beach to Georgetown and is one of the most beautiful stretches of water on the ICW. Cow House is really not a creek (at least not any more, I'm sure it was once before the Waccamaw took a “meander” and cut it off). You anchor behind what is now an island cut off from the river and in complete isolation. There is a feeling of peace here. Here nature rules. Civilization could be a million miles away. It is a place, that if you let it, will share it's peace with those that seek its solitude.

The ICW crosses the Santee River not once but twice (N.Santee & S. Santee). The best anchorage is in the S. Santee. Here Skat and Oconee settled in for the night. The next day gave us a run thru Cape Romain National Wildlife Refuge. It is flat country with finger like deep creeks flowing thru the marsh with names like “Five Fathom ,” Bull ” and “Toomer.” As the name implies wildlife abounds. G and I have seen wild cat here and, this year, a bald eagle sitting regally on and oyster shell bank.

We spent the night in Long Ck off Dewees Ck. It is one of my favorite anchorages on the ICW. You anchor in 20' of water and see 80' next to the banks (rarely do you see even 20' on the ICW these days). Only 15 miles from Charleston you might as well be on the moon for the difference. The only hint you may be near large cosmopolitan city like Charleston is the loom of it's lights at night and the sails of the new Ashley Bridge on the horizon by day. This is a special place filled with the call of birds tucked back up in the marsh. Here small hummocks of trees push their way skyward like small islands rising out of the saw grass. Add the parade of masts and superstructures of boats just visible over the marsh (see photo of Skat over the top of the marsh on in the web photos) and you have one example of why I love this life. 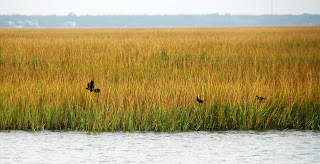 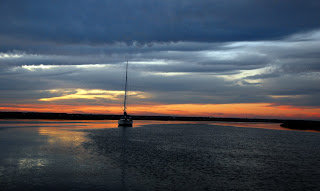 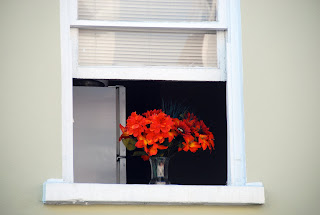 Thanks for "dragging" Beltane along with you! Jim kayaked from North Topsail to Charleston a dozen years ago and your description of this part of your trip brought back lots of great memories. Have fun in Charleston and have a glass of wine for us at SNOB (Slightly North of Broad)