I need to backup...and this story takes a bit of twist and turn and needs a little explanation so bare with me. On the way down the Cape Fear River to Southport a crown came off one of my teeth so a trip to the dentist was mandatory. With the help of the dockmaster at Southport Marina and a couple of phone calls I was set up for a late visit on Monday to put the crown back where it belonged.

While waiting (there is always a wait) for the dentist I got to talking to Karen, the medical assistant manning the desk. She asked what I “did?” Being gainfully unemployed and fully “retarded” and sensing an opportunity for a story I told her, “I was a smuggler.” She gave me a confused look and took the bait.

Seven Seas Cruising Club for years has worked a deal with school book manufactures to collect their school book over runs and last years leftovers and distribute them to cruisers headed for the Bahamas. Us cruisers quietly “sneak” them past Bahamian Customs in guise of “ships stores.” Then ferry the contraband ashore in our dinghies into the open arms of the schoolmarms in the Exumas, Raggeds, or other “Out Islands.” Bahamian Customs charges a 40% import fee for goods, schoolbooks included, so we Cruiser not only save them the cost of the books but the import fee. This year Gigi's Island will have 8 boxes of books aboard bound for Black Point Settlement in the Exumas. So I guess that technically makes Gigi and I “Smugglers.” Karen laughed and about that time the dentist was ready for Old Vic.

After the crown was put in it's proper place and I was paying the bill Karen reached behind the desk and handed me a big bag of toothbrushes with a large toothbrush that is used to teach kids how to “brush” included all tied up with a bow – must have been a couple of 100 in the bag. She smiled and said, “Now I'm a “Smuggler” too. There are a lot of good people in this world.

“Not all that wander are lost” JRR Tolkien

We eased our way down the last North Carolina steaches of the ICW. Through Lockwood's Folly. Through Shallotte Inlet and, for the last time, through the pontoon bridge that connects Sunset Beach to the mainland. Sunset Beach bridge will be a highrise in the spring. For those of you that want to see up close and personal what some of the stimulus money is doing you need only look to the ICW. During the Bush administration the ICW and it's infrastructure had been almost totally neglected.

Lock Folly and Shallotte Inlet were dreaded by all cruisers and almost impassable. To the point that the Corp of Engineers were thinking of giving up on Shallotte and pulling the marks. Today both inlets have been dredged and you almost never pass a bridge anywhere on the whole length of the ICW from Norfolk to Miami that is not undergoing some from of maintenance. 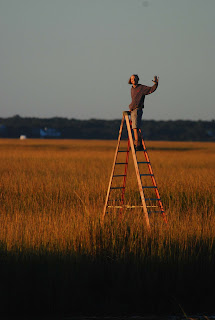 We spent the night anchored in Calabash Creek, SC, with one state behind us... but just barely. South Carolina is my favorite area of the Waterway (once past Myrtle Beach), but Myrtle Beach was special this year. We made a short run from Calabash to Barefoot Landing Marina in North Myrtle where Buddy Bulow, friend of mine from my previous life with NC DAQ, picked us up and took us to CAPCA (Carolina's Air Pollution Control Association's semi-annual meeting). I've always wanted to stop on my way down the Waterway and “smooze” with my old work life friends and today was the day. It was even better than I had hoped. A work life may have an end point but friends are forever... Forever.

Just South of Myrtle Beach is the Waccamaw River. The Waccamaw is an old, meandering, cypress, lined river. It is a beautiful river to run at this time of year. “Gigi's Island” feels like “African Queen” as she snakes her way through the cypress and lilly pad lined water. Life here has her own rhythm - it is old, it is slow, it is comfortable. Here even the “Island” feels the difference. She eases into a rhythmic Chug-a-lug-a-lug-a, Chug-a-lug-a-lug-a – a steady, strong, and confident feel. Like the River herself.

We anchor behind Butler Island with the island on one side and old abandon rice plantations on the other. Then settle in for a spectacular sunset and moonrise. The cypress that line the island's shore light up like torches of red and brilliant orange...and then the full moon rises with the sun's Autumn colors still splashing the trees.

The Waccamaw empties into Winyah Bay, a big open bay that leads to the ICW and the start of the “low country” of South Carolina – marsh as far as the eye can see with a spider web of life giving creeks and rivers that connect it to the Atlantic. We wind our way thru creeks and man made cuts over the next 2 days and anchor in Dewees Creek just north of Charleston, SC.

Dewees Creek is my favorite anchorage on the ICW. You are surrounded by a sea of grass deep in a salt marsh. Twice daily you rise and fall with the heartbeat of the tides. Dolphin fish the shoreline for their supper. Shore birds of all species wade the shallows in their constant search 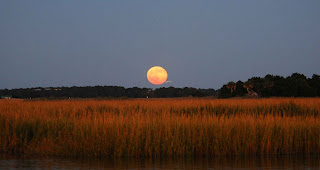 for food. Fishermen pass a leisurely day taking an occasional red drum or trout. There was even a professional photographer that shows up with a ladder to photograph the marsh as it catches fire at the dieing sun as it paints the saw grass with reds, oranges, and golds. I'm reminded of a quote from “Education of Little Tree.” Little Tree's Granddad would take him up on the ridge to watch the morning break clear on their mountain. He would always quietly, reverently, and in hushed tones say to Little Tree when the sun broke the ridge “She's coming alive.” The marsh does too afire with the splendor of the Fall. 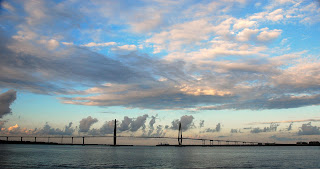 Charleston is well...Charleston. We spend a couple of days at Charleston Maritime Center in the company of fellow cruisers including the “Liberty Clipper” out of Boston whose crew were having more fun than the law should allow. 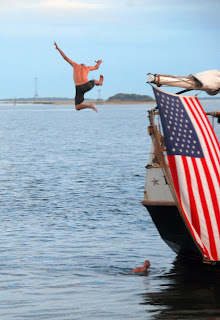 Then we headed South again. Through Wappoo Creek and Elliott's Cut. Down the Stono River. Winding our way though a series of cuts, rivers and creeks with names like Toogoodoo, Steamboat, Dawho, Ashepoo, and Coosaw. This like most of lower South Carolina is an area of the low country that is remote and beautiful.

Speaking of beautiful places, we are currently at anchor in Beaufort, SC, waiting weather for our jump off shore to Fernandina Beach, FL.

PS – As most of you know Gigi's daughter-in-law, Kristen, is not so patiently waiting the birth of triplets – two boys and a girl. She has been in and out of the hospital for the last few days but is currently home..waiting. Due date? Any minute.