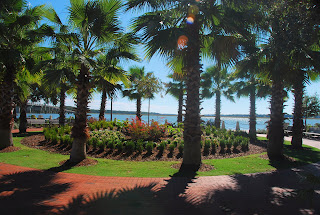 Beaufort, South Carolina is a picture of what a small town can do right with its heritage and resources. The water front is a park with many private area to sit, think, read, or watch the world go by. I has a grassy common area that is in constant use – kids playing, concerts, weddings, or 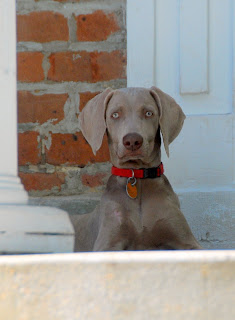 just small family picnics. While we were there the green was a Halloween party for all the kids in the area complete with movie afterward (Capser the Friendly Ghost of course) and a wedding the following day. Beaufort is a town to explore on foot. The streets are shady, Spanish mossed, and tree lined with homes that go back to the Revolution. It is speckled with little parks complete with benches that reach out to those willing to slow down and enjoy a moment of solitude.

We spent a couple of days doing just that, enjoying the solitude of Beaufort. As we strolled along I looked up on one of the columned porches that are common to Beaufort and there “guarding” the home was a Weimaraner pup. I have a soft spot in my heart for Weimaraners. As the camera came up and I looked into those inquisitive yellow green eyes I am whisked back in time.

I am no longer 65 years old. I am a young man again and 33 years old. My son, Noel is 3ish. And we own one of the gentlest, friendliest Weimaraners in the world, Christina Von Storm Cloud Copelan (Christina for short) – She farted a lot thus the “Von Storm Cloud.” It is a Fall afternoon and I have just gotten home from work. Christina is on the front step of the house sleeping in the strong evening sun. Noel greets me at the back door. I scoop him up and give him a couple of tosses in the air. He shows me his “new shoes” and how he can “kick” leaves and make “swooshing and rattling” sounds. Like most little boys he likes the crisps staccato sounds the leaves make stirred by his little kicks.

My long legs and I walk out to the mailbox about 50 feet from the house leaving Noel to follow along in my wake. I can hear Noel's little kicks as he slowly follows in my footsteps. Then I hear a low quaking growl the kind mad dogs on the run make. I turn to see my neighbors 2 German Shepherds in full flight charging Noel. My heart goes to my throat, there is no way I will be able to get to Noel before the Shepherds but I start anyway knowing it is a futile attempt.

To this day I have no idea how she did it. Christina just “appeared” between Noel and the Shepherds. My little “Gray Ghost” commenced to take names and kick Shepherd butt. She left both of them a bloody mess and howling for home. This gentle, sweet, non-aggressive dog had saved my son's life.

As the camera came down I was old again and the Weimaraner pup on the porch turned over and went back to sleep sensing I was no threat. As I said, I have a soft spot in my heart for Weimaraners.

Off Shore to Fernandina Beach, FL

The trip offshore from Beaufort, SC to Fernandina Beach is 125 NM anchor to anchor in Bell River about a quarter mile off the Fernandina waterfront. The trip usually takes between 23 & 18 hours (it took 22 hours dead even this trip). Which means it requires an over night passage. The good thing is it saves us 100 miles of winding thru Georgia and about 4 to 5 days travel time.

Compared with the ICW offshore is usually a piece of cake. Granted the boat's moment can be a bit more tiring but you don't have to concentrate ever minute of every mile and running aground is pretty much out of the question unless you really do something stupid.

We outsmarted ourself this trip. We waited one more day for the weather to settle and the seas to drop – wrong choice. The Island hauled her anchor at 1:00 PM on Halloween and headed down the Beaufort River to Port Royal Sound and the open Atlantic. By the time we reached the sea buoy at the mouth of Port Royal it became real apparent that the damn “weather guessers” had missed it ...again. Instead of being 5-10 out of the West it was 15-20 Southwest and dead in our face for the next 95 miles. We were in for a bashing - hitting 3' chop square on the pointy end and slowing our progress to less than 3 knots at times.

Boats at sea are not quiet. Everything in the lockers rattle, shake, bang, and clunk (assuming you did a good job of “de-housing” if not add “fall” to the list and whatever you forgot is on the floor). If you are in a well found boat like Gigi's Island then it complains with loud thuds as the sea does her best stop the boat but she takes it all in stride. I've been in boats that are not so well built and they ring like a steel drum being hit by a 10 pound hammer. Even in the Island sleep under these conditions are pretty much out of the question. Turned out the wind finally did drop out on my watch at about 2:00 in the morning and finally worked its way West. The last 8 hours of the trip our speed increased to 6.5 knots and we rode easy over a slow rolling sea.

Sunrise at sea is always special. I don't care how many times I see one there is something about a fiery red sun shouldered up out of a dark sea that warms the soul and thrills the heart. By 11:00

AM on November 1st the anchor was down in Bell River, two more States (South Carolina and Georgia) were behind us, and we had our anchor's down rum in our hand. An hour later we were both down for a nap..dead tired.

We had planed to spend a few pleasant days anchored in Bell River, enjoy Fernandina and then move up to Cumberland Island for a few days before heading further South. Again we outsmarted ourselves. Wednesday a cold front moved thru the area, the temperature dropped into the high 30s at night, and the winds have been above 20 knots ever since....shit. Translation, we have been stuck on board for 3 going on 4 days and no HEAT. That's the bad news.

The good news is that the complete inclosure Gigi had build for the cockpit has given us a “solarium” to spend the day in. And Bell River has provided us with some entertainment. A pod of dolphin apparently live here complete mother and calf. It is fun just to watch them feed and play in the low Autumn sun, fishing the edge of the marsh, and doing head over tail cartwheels just for the pure heck of it.

Hopefully, tomorrow the wind will drop out and we will be able to venture into town again, get a HOT shower, and a meal that I don't have to cook. Then Tuesday head South for Palm Coast where we will hold up until after Thanksgiving, visiting with friends, and celebrating special events with family.

PS – No news on the triplet front. G's grandbabies are still in the “box” but it can't be much longer.

Wonderful dog story, Vic! And your pictures are beautiful, as always.

Cool story about your dog! Life is quiet at MP - subject to change this weekend - Beast Feast!