It's funny how “cruises” take on a life of their on - a theme if you will. This years seems to be “friends and family.”

The “Island” snaked her way through Matanzas Inlet's notorious shifting shallows and within the hour we were tied up nice and secure in Palm Coast Marina. It didn't take long for a cockpit party to develop. Gigi's cousin Tom Cook and his wife Olga showed up with a bottle of sangria and our friends Steve and Aggie Knox planted themselves in a corner of the cockpit with bread sticks. We added rum and cheese and it was time for a gam and catch up.

Steve and Aggie came bearing news. They were going to be “CLODS.” That's Cruisers, Living, 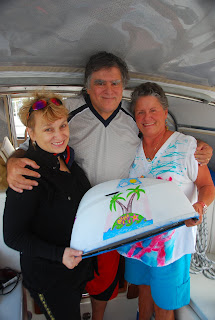 On, Dirt. They had bought a house and would no longer be liveaboard boat dwellers – a sad and glorious time one that will come to us all if we live long enough. It did not take long for Gigi, Olga, & Aggie to cloister themselves in a corner with “designs.” Olga had come with designs to paint the cowling of Gigi's new Yamaha 15 HP outboard to make it mo beautiful and less stealable. Which gave Tom and I the job of removing the Yamaha stickers on the cowling, sanding, and priming it so Olga could work her magic. God she did a beautiful job. Fellow cruisers now have “cowling” envy. I think Olga could go into business if she wanted to. A number of folk have asked us “what she charged?” Beautiful job Olga. Gigi says, “Thanks again!” 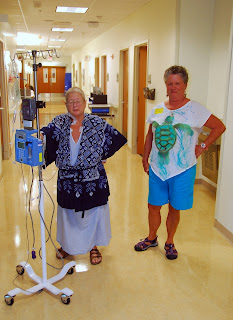 From Palm Coast we rented a car and started a life on the run. We headed south to Hollywood, Fl. to be with Mac and Shirley of last years “bitch wings” fame during her operation to remove a cancerous tumor. It did not go as expected. The surgeon decided to leave the tumor when they discovered more cancer on her liver. She is doing OK and will visit her doctors soon to see what the next step is. Keep Miss Shirley in your thoughts and prayers. You will note from the photo that not much keeps Miss Shirley down. Even in the hospital she was displaying “half bitch wings.”

Then Palm Coast to Orlando to attend Gigi's cousin Bill Hazlett's 50th anniversary of his ordination as an Episcopal priest. Gigi treated everyone to dinner at Bill's favorite Irish pub, “Ragland Road.” It was sort of a mini-family reunion with Bill, Gigi, Tom and his wife Olga, and a friend of Bills, Robert (?) down from Vermont. The pub is an actual Irish pub brought over from Ireland and re-built just outside Disney World. The food was superb – ribs with Gennis sauce and killer bread puddin'. The entertainment was Irish to the core complete with Irish dancers and musicians. Bill knew them all and they all came by to congratulate him and meet his family and friends. He even has his own “chair” at the pub with his name on it - all and all a great evening. 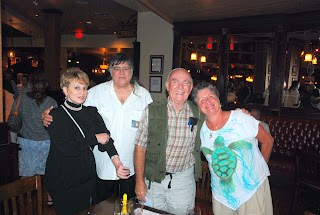 We left the motel early the next day headed for an old fashioned family Thanksgiving gathering at my brother Richard's house in Birmingham. At 10:00 AM during the drive up Gigi got “THE CALL.” She was a grandmother times 3 – 2 boys with heads full of black hair and a little blond headed girl, all weighing in at a healthy almost 6 pounds apiece. Landry Hope, Gunner Christian, Dillon Brewester, and their mom, Kristen, are now home with their proud dad, Christian Perry, and are doing fine. There will be little sleep to be had in that family for few years. The “triplets” (now known as “Trips”) are in addition to 2 other children under the age of 4. “Trips?” “Trips!” Kind of appropriate don't you think? God help 'em! 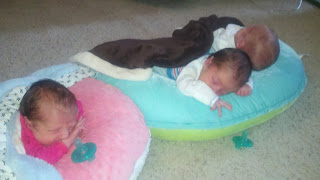 On to Birmingham for a Copelan family gathering. We had not had been together as a family for Thanksgiving in probably 8 or 10 years. Richard and his wife Lynn had a house full with Lynn's daughter Kate and her new husband Tate Windham, her son Michael, Mr. Wiburn Stewart (Lynn's Dad) & his lady friend Pat Smith, Ronald (my middle brother), Noel (my son), and (of course) Gigi. It was a holiday filled with fine food (Richard & Lynn are good cooks), southern football (Auburn / Alabama of course), and the warmth of family. Add Gigi's news and this Thanksgiving will live in my memory for the rest of my life. I love my family and miss them when I'm cruising. 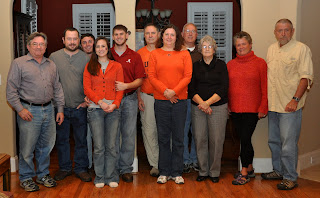 We returned to Palm Coast on Saturday to find our friends Bob and Penny Kingsberry on “Pretty Penny” and Buck,Vicki, and Magic (their pup) Dawkins on “Victoria Gaye.” had arrived. Bob and Penny immediately organized a second Thanksgiving dinner that could not be beat and another gam and catch up.

“Victoria Gaye” and “Gigi's Island” will travel in company for the foreseeable future. We left Palm Coast on the first of December and “froze” our way South to Vero Beach. The boats are currently in the mooring field rafted to each other with what feels like icicles hanging from the rigging. It has been in the 30s at night for almost 10 days now. Burrrrr! We are all ready for this cold spell to break. Life with no heat sucks. But we cruisers do what is required and have fun regardless of how much “mother nature” tries to block our path.

Check out WRALTV news about liver cancer. There is a doctor doing some sort of treatment and it is working!!!
I'll research more and let you know what I find

SIRT - non surgical treatment that shinks tumors to nothing