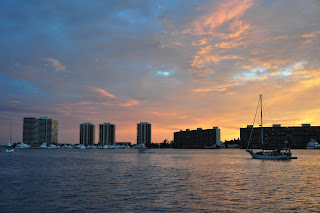 After a hoot of an evening at the Irish pub with Gigi's cousins Tom and Bill. G and I returned to the motel to crash and store up some energy for the 550 mile trip the next day to my Brother's house in Birmingham. Not long after we settled in I got a call. It was my son Noel with probably the most unexpected news I've had in the last 10 years. I'm going to be a “Grandfather!” Noel kept saying, “but it's early Dad, it's early so don't tell everyone just yet.” After he repeated it about a dozen times, Old Vic asked, “Just how early is it Noel - months, days ,or hours?” “Aw Dad, around a month,” was his response. Am I excited? – I slept little that night.

I don't know about you folk that are already grandparents but the possibility of being one brought on a sea of unexpected emotions. I can't quite explain the feeling. It is not just excitement but it is excitement surely. Not love. But it is that. Not a deep calm like a slick calm sea. But it is that too. I've not ever experienced a feeling like it even when Noel was born.

Richard Bode in one of his books said (or words to this affect), " Being a parent is like straddling the stream of life. You can see the future on the other bank but you are not across. When you become a grandparent you step completely across that stream to the other bank and you know you will continue into the future for one more generation.” Cool thought.

We spent 12 freezing days on a mooring ball in Vero Beach rafted to Buck and Vicki Dawkins. Freezing? Maybe not by your standards but for us it was cold – nights in the upper 20s to low 30s, days in the high 40s to 50s, winds 15 to 30 mph sucking what little heat we had out of the boat. Burrrr! And we had only 2 clay flower pots turned up side down on the propane cook stove for heat (thanks for reminding me of that old sailor's trick John). Actually it worked quite well, temperatures in the cabin would stay in the low 60s until bed time. But let me tell you typing is really a chore with gloves on. 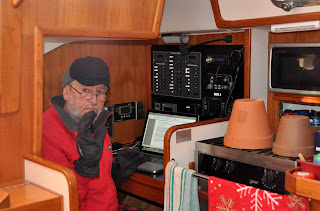 One morning the “coffee alarm” in my brain went off as usual at 7ish and we were greeted by one of those “see your breath mornings.” I rolled out of bed and slid into my smart wool socks, long johns, 2-T shirts, under armor shirt, hooded sweat shirt, thick sweat pants, jacket and... a “bunny hat” in an attempt to stay warm . Then staggered into the galley and lit the stove for coffee water (flower pot on the spare burner for heat.. of course). I retired to the “reading room” to freeze my butt off when Gigi called from the galley. “Vic I think we are out of propane in tank No.1.”

I finished my “business” (no need to put on a jacket since it was already on) and eased out the companion way to the propane locker to switch tanks. When I pulled the male pigtail out the O ring that had been on the end was missing. “Gigi,” I said, “We got a problem and if we don't get it fixed there will be no heat and no way to cook. The tank and pigtail are now going to need a trip to a“Propane Store” - either for parts or to be fixed. I can't do this aboard.

Jobs that normally take “dirt-dwellers” half an hour to complete take on different proportions to us “carless” cruisers. First, Vero has the best bus service anywhere on the East coast and it's free. The problem is buses are “public transportation” and no propane tank can be transported in “public transportation.” Taxis? Nope, same deal, “public transportation.” The tank, pigtail and I dinked into the Marina office and threw ourselves on the mercy of the court. The Dockmaster said, “Como Oil and Propane could fix it” and looked up the phone number for me. Curtis at Como Oil said, “If you can get here by noon I can get the part you may need and fix it this afternoon.” First problem solved. One of the guys at the marina said, “Hell, I'll drive you over to Como, no problem.” Second problem solved. 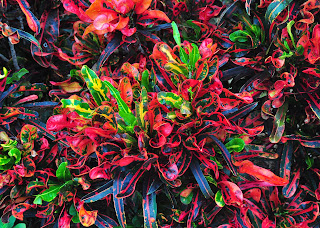 Como was way across town. When I got there, no Curtis. The receptionist said, he should be back in 45 minutes. I waited. When Curtis arrived he walked straight up to old Vic and said, “Get your stuff and let's go back to the shop.” Curtis was a balding 60ish kind of man with a big toothy smile and a kind countenance. He took one look at the pigtail and tank and said, “Hell, you ain't got no problem. These new tanks are set up to handle a lot of different kinds of pigtails. That one you have will work just as well with or without an O ring. Here, let's put some propane in your tank and make sure it and the pigtail don't leak.” It didn't and he finished filling my tank.

“How you gonna get that damn thing back to the Marina?” Curtis asked. “I don't know yet...,” was the best answer I had. “Throw the tank in the back of my truck and I'll take you.” “Let me run in pay them for the propane and I be right with you...and thanks!,” a I turned to go inside. “Hell they don't need that $10. I'm just sorry you had ta wait. Let's go.” Curtis said with a grin and twinkle in his eye. With that he drove me back to the dingy dock. Back at the dock Curtis coated the pigtail with pipe “goop” so it would not leak and went on his way. Needless to say I tipped him well.

You would think the story would end here but it doesn't. Back aboard “Gigi's Island” I put everything back together, leak tested the system and found a leak. When I took the pigtail off with vice-grips pliers I must have put too much pressure on one of the fitting and probably warped it. Now I really do need a new pigtail. I called Curtis back at Como and asked if he had one. “I got one and have to be back over your way this afternoon. I'll bring ya one. I'll give you a call when I leave the shop.” And you know, when he delivered it he was sorry it cost so much, “ Ten dollars is just too much for these damn things.” as he “gooped” up the new pigtail fitting. I thanked him from my heart and again, tipped well. (not that Curtis expected a tip at all. He didn't he was that kind of man.). 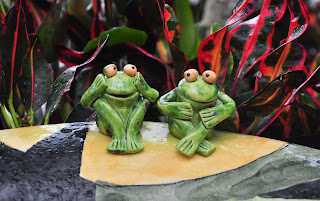 I tell you this story for a reason. Little problems in the life of Cruisers can take on huge proportions. We live at the mercy, good will, and grace of others. In our world the “Curtises” are the norm. Time and time again when we are faced with a problems that seem insurmountable by some miracle a “Curtis” appears. We Cruisers are lucky people our “Thanksgivings and Christmases” don't come just once a year. We are reminded of the spirit of the holidays on a regular basis whenever a “Curtis” walks into our lives.

We are currently anchored in Lake Worth (West Palm Beach) and will leave tomorrow for Hollywood to spend a Christmas with Mac and Shirley. Buck and Vicki Dawkins will join us in Ft. Lauderdale after Christmas to stage for our crossing to the Bahamas. 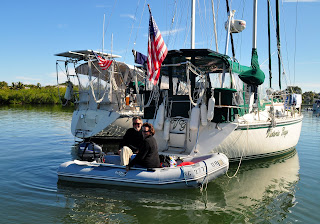 Merry Christmas everyone and may the new year bring you many “Curtises.”

Brrr! Things are cold all over!