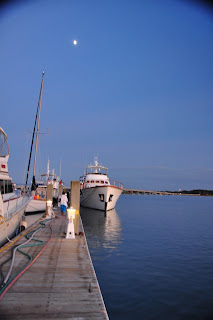 “Ten Pounds of Sugar in a Five Pound Bag”

When I moved aboard 12 years ago it was not much of a shock to my system. After all, I was moving aboard “Oconee” - a floating palace with copious storage and all the amenities. However, going from 2000 square feet of living space to a home with less space than an average walk-in closet can be a bit of an adjustment especially for a lady (and consequently for me). It was and is an adjustment even for a remarkable lady like Gigi that had already shed most of her worldly possessions to pursue the cruising life and run of with an old “Creek Curmudgeon” like Vic.

One of my all time heros, Dick Bradley, said moving aboard a boat after years as a “dirtdweller” was like tryin' to put “Ten pounds of Sugar in a Five Pound Bag.” There's a lot of truth to that statement especially when one of the ones doing the movin' is a lady. 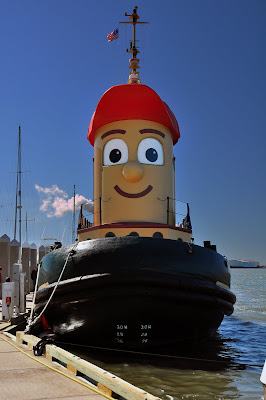 Men are simple. Take clothes. All my clothes fit in the small hanging locker and a couple of small “stuff-in bins.” Shoes? I got 2 pair of sandals (one lives in Mule just incase I forget to put on my good pair before leaving the boat for shore) and one pair of real leather shoes (worn 3 times in the past 5 years – should leave them in the boot of the car shouldn't I?). Sox ? I got 2 pair just incase my feet get cold going down the waterway in the fall – one to wear one to wash. Two that is, if you don't count the 30 odd sox I use to keep my rum bottles from “bruising.” In truth I could get rid of half what I got and still have plenty of clothes. We want talk about “undies” - who needs 'em anyway. 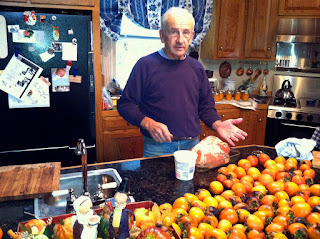 Gigi on the other hand, like any good “Admiral,” has the large hanging locker with extra shelves in back, 2 drawers, and miscellaneous hidy-holes for her stuff. Truth be known, she could and would fill 3 times the locker space if she had it. But then clothes are as necessary for a lady as tools are for a man (I'll admit to having way too many...but I ain't getting rid of any either).

Shower stuff is another deal. Me? I got soap, a scrubby, and a towel. No shampoo you might ask? Nope, I figure if it's good enough to wash my ass it's good enough to wash my head. You could lift my shower bag with one finger. Gigi on the other hand, has a black bag full of stuff that must weigh 10 pounds that she lugs to the shower each and every time. What's in it and what its contents are used for are a mystery to me as I'm sure it would be to most men. But it does keep her clean and seems to keep her quite beautiful...at least in my eyes. 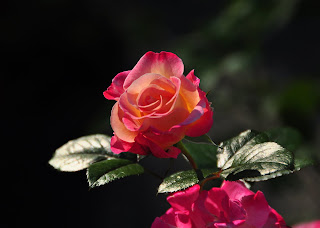 Then there is spare parts, food, toilet paper (lots and lots), rum (a must), beer (beer is $50 a case in the Bahamas), TV, movies, CDs, computers, paper, books (every nook and cranny has a book or two), and a bunch of stuff we just could not do without but have little if any use other than emotional and physical “comfort.”

Get the picture? Oconee is full to the brim but not just full of stuff. She is as full of life and living as she is of ships stores. Cruisers tend to fill that “five pound bag” to the bursting point with ten pounds of experiences. The next bend in the river, the next anchorage, the next destination brings new friends and unexpected living. All you gotta' do is jump in with both feet and hang on.

Just this year we have picked persimmons and made jam with Matt and Diane Zender. Been visited by pods of dolphin that seem to love to swim with Oconee ever single day. Why I don't know but this year seems to be the year of the dolphin. Seen a real 50 foot tugboat named “Timothy Too” outfitted like “Little Toot” of children's book fame complete with orange ball-cap and moveable eyes built by some crazy mariner from Nova Scotia. But then I'm being redundant, all us cruisers are just a little above “abby-normal.” But then, “Normalcy is in the eye of the beer holder,”as I like to say and way over rated. 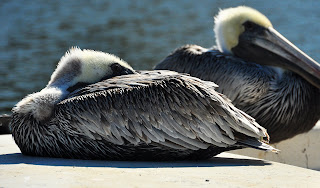 One more thing that 5 pound bag is full of and it may be the best thing in the bag – a renewed faith in people, their simple kindness, and humanity. Because we have little in the way of transportation, other than our “feet” and a good dingy, we have to rely on the kindness and generosity of friends and perfect strangers. Everywhere we go people are willing to help us find a way out of the mess we have got ourselves into or just to the store for more beer. Our friends, Matt and Diane Zender, loaned us their dock on Toms Point Creek, ferried us everywhere, and allowed us to stay while GG when back to Raleigh for a pre-oral surgery checkup. Debbie at Palm Coast Marina found a way to get us into an already full marina so GG could return to Raleigh for her surgery. Tom & Olga Cook and Steve and Aggie Knox have taken me everywhere without the first complaint. Buck & Vicki Dawkins and Muril & Mike Doster have taken Gigi under their wing and taken care of her while she is in Raleigh for surgery. And around the next bend, someone else will step up to the plate and save our sorry ass...again.

In truth I think it gives people joy to help their fellow human beings (I know it does me). It takes a while to get used to the ideal that by letting folk help you we actually help them. Once you learn that lesson that “five pound bag” fills up fast.

Yep. Us cruisers are lucky folk we get “10 pounds of sugar in a 5 pound bag” anyway you cut it. ….And to boot, we have a sunrise with our coffee and a sunset with our “toddy” almost everyday. Man, that's living.

PS – Gigi is recovering nicely and should be back aboard just before Thanksgiving.

Less is more, they say . . . You seem to have figured it out. I could cut back on clothes and toiletries (I do like shampoo though) but never on dogs and books . . .