When I was a little boy and “got too big for my britches.” My Mom would say to me “Boy,.. you are a risin' for a fall....” and that usually meant the “fall” was going to be provided by her or (god forbid) my Dad. It seems we never get too old for our ego to get a little adjustment.

Oconee and I had done real good this year. We made it thru Shallote Inlet and Lockwood Folly in North Carolina without once running aground or even coming close. Tiptoed thru the 15 miles of 7 to 6.5' water around McClellansville, South Carolina, without a hitch. Greased right thru Fields Cut at dead low tide and was spit out like a watermelon seed into Georgia's Savannah River current (and they said that could not be done) and never saw less than 7.5' of water to boot. Oconee and I transited Hell's Gate, Little Mud, and Jekylle Rivers in Georgia at mid-tide with not a problem. We easily put the Amelia River and Matanzas Inlet behind us in Florida with not even a “ooze” into a single mud bank. All the bad spots on the ICW were behind us and not a single grounding. Old Vic was getting' pretty “cocky.” He didn't know it but he had also put all his “risin'” behind him and his “fallin'” was coming up fast. 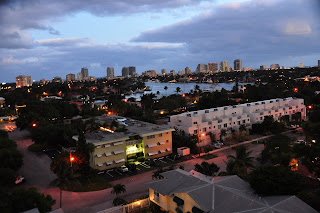 As we eased into Vero Beach's mooring field things were a mad house at the marina so I “volunteered” to raft to Bob and Penny Kingsbury on “Pretty Penny”, a 50 foot powercat on mooring ball 50 way up toward the end of the mooring field next to a small mangrove island. Oconee motored slowly up the channel next to the western border mangroves, turned thru the field of moored boats and took a course about 20 feet off their sterns parallel to the line of moored boats that “Pretty Penny” was in and ran solidly aground. Oconee backed off the shoal, picked another approach, and turned in for another try. That did not work either but this time I was hard aground in the mooring field and had just become the “cruiser entertainment for the day” as a swarm of dingys off other moored boat came to our rescue. After about 20 minutes Oconee was free again, went back to the channel off the bow of the moored boats and was soon along side “Pretty Penny” safe and sound or so I though – after all my keel was in 7 to 8 feet of water.

Next morning, Oconee's keel was still in 7' of water but her rudder was in 3.5 feet and taking the weight of both “Pretty Penny” and Oconee – not good. Bob and I put our heads together and decided to pass the mooring pennant to Oconee and he would go to another mooring and that would at least take his displacement off Oconee's rudder. As booth Bob and I walked forward and a I took the pennant Oconee slid into deep water. After moving to another mooring and diving the rudder it appears Oconee is OK and has survived another round of abuse under Vic's command. 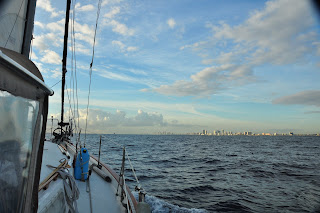 But my “come-upins” were not yet complete by a long shot – the gods were not finished with old Vic. To jog your memory the ICW rule is “Red marks are on the right side of the boat headed South on the ICW.” The first mark after passing under Vero Beach ICW bridge is “red.” Why I do not know but at the time it seemed perfectly acceptable to take that red mark on the left hand side of Oconee. Wham! Oconee ran straight into a shoal that brought her up all standing. The ground comes up quick around here and Oconee had hit a “wall” of sand. I backed off with another dent in my ego and none in Oconee.

That would have been bad enough but Gigi was on the head at the time. I “de-throned” her in a manner she will never let me forget knocking her completely off the head and landing her in the shower. I am hoping that my “fallin'” is over for the present and I have a little “risin'” in my future. If not, I'm sure Gigi will bring up the “head” incident again....and take over my ego adjustment where the gods left off.

The ICW run from Lake Worth to Ft. Lauderdale is a sailboat's nightmare – 47 miles and 20 bridges. There's Flagler Memorial Bridge – opens on the quarter to and quarter after the hour, Royal Park Bridge – on the hour and half hour, Southern Blvd. Bridge on the quarter to and quarter after, Lake Ave. - on demand, Lantana Bridge – on hour and half hour, and blur of 16 more frustrating bridges. You get the picture. 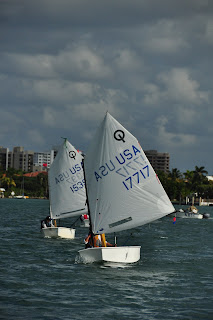 Most bridges open on a timed schedule and a pitiful few open on “demand” (read request). Bridges don't open on “demand” by-the-way. I was taught that many years ago by the bridge tender of the Titusville Bridge while bring a boat North with my good friend Mike Yount. I called the bridge and asked if he “opened on demand?” He courteously replied, “ No captain, I don't open on “demand,” but I do open on “request.”” I replied, “May I have an opening when we get there please” (I was a quick learner in those days). He came back, “Bring it on Captain. I'll have it open when you get here.” To this day I always “request” an opening and never fail to thank the bridge tender after we pass thru...even if he was one of the few true assholes Florida has employed as bridge tenders. Most bridge tenders are quite professional.

There is a bit of skill (and luck) involved with bridges. First, because they are timed you have to time your arrival at the next bridge as close to it's opening time as possible. That means you are constantly adjusting speed to coincide with the next bridge. If you miss your time and are early you have to hold the boat in place and wait while dealing with other boats doing the same thing while all the time the bridge tender keeps reminding us “bring it up close.” It's not like a car pulled up to a stop light. For example: Imagine if you will you stop your car at a light but you keep drifting into the intersection, or the wind decides to turn it sideway, or current keeps you headed straight for the bridge, or the car beside you wants to pass and go thru the light first (he is a faster car), or the brakes don't work and you need to throw the car in reverse to keep it from running the light. ...And you have to remember to “call” the light or it will not turn “green.” If you are late for a bridge that almost guarantees you will miss the next and end up waiting half and hour to an hour for the next opening. And if the bridge for one reason or another does not open, the whole deal is shot to hell and may not get back on schedule. Now add to that the “macho Florida crazies” that have no respect for anyone except themselves and you have a day on the water filled with tension, exasperation, and a touch of anger. Now you beginning to get the picture. Bridges are a bit of an art form with a huge dollop of luck thrown in for good measure. 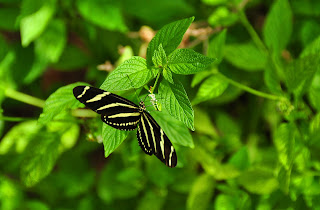 By the time we reached Middle River in Ft. Lauderdale we were exhausted and strung tighter than a Mark O'Connor string. That run is my least favorite part of the waterway. Gigi put it best, “Think I'll have 3 glasses of wine tonight.”

South Florida is not the United States it is really “Cuba North.” From Ft. Lauderdale South English is a second language as is evidenced by the TV Channels. We don't have cable or satellite TV on Oconee just a simple antenna. In Frenandian we picked up 28 channels – two of which were Spanish speaking. In Ft. Lauderdale we got 36 – half of which were Spanish speaking. In Key Biscayne we get 32 channels – 6 of which speak English and 2 of those are infomercials. Here you can even watch NFL games in Spanish. Spanish language or not, Cubans one-on-one are very nice folk just don't put them behind the wheel of a car or boat. Do that and you better get out of the way or their “macho” butt will run over you. 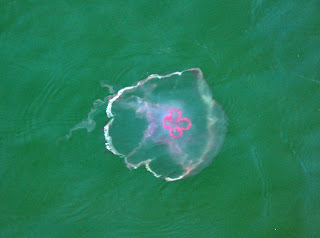 We are currently anchored off Key Biscayne in company with our friends Jim and Barb Thompson & Missy (their ancient pup) on “Skat.” It looks like there will be little hope of making the Bahamas by Christmas so we will make Christmas here. This year we are lucky we will have our friends Jim, Barb, and Missy to share Christmas dinner with. I wish you and yours a heart warmed by the love of friends and family, good food (of course) and a healthy and fun filled New Year.

Finally catching up with your posts -- love the pictures! And a Happy New Year to you and Gigi!