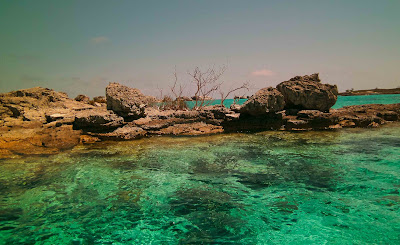 “The trickiest part of any voyage or cruise may turn out to be the short leg between any harbor entrance and dock, both on the way in and the way out.” Carleton Mitchell

“In certain places, at certain hours, gazing at the sea is dangerous. It is what looking at a woman sometimes is.” Victor Hugo 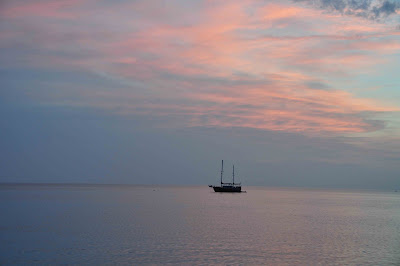 The first year Gigi and cruised the Exumas was 5 years ago..can't be that long ago, but it was. We were knee deep in 4 weeks worth of laundry. The guide books said the only place really to do laundry in the upper Exumas was Ida's Rockside Laundry in Black Point Settlement.

We anchored in the bay off Black Point and headed for the dingy dock with a boat full to running over with dirty clothes. Lugging three bags of laundry and sundries we headed down the dock and up to the street. Gigi and I each had a bag in our outboard hands plus the huge LL Bean bag strung between with Gigi on one handle and me on the other.

We had just reached the street when the Black Point Police car (ain't but one) pulled up beside us and stopped. Gigi looked at me and I looked at her with that question of a look that says, “What have we done..and we just got here too?” look on our collective faces. The Officer rolled down the window, peered out with his big Bahamian smile and said, “You folks look like you need a ride to Ida's. Hop in.” And that is how we met Kevin Rolle and he has been a friend ever since. We fell in love with the Black Point community at that instant and have been hooked on its friendly helpful people ever since.

Friday, two weeks ago, we were at anchor in Pipe Creek when Kevin came by in the police boat out for a day of fun with his sons. We waved. Kevin flashed us one of his big Bahamian smiles, waved back, and headed off toward Compass Cay. We didn't know it at the time, but that was the last we would see of our friend Kevin on this earth. Kevin was to die saturday night of a pulmonary aneurism. He was flown to Nassau but did not survive. Kevin was just 46 years old. He left behind a wife and family and three communities in shock (Black Point Settlement, his brother's in arm in the Bahamian Police Force, and us Cruisers). He will be buried with full military honors in Nassau this Friday as is only fitting.

Kevin was more that just a policeman and preacher. He was the heart of his community. He was the best ambassador Black Point could have chosen. And he was our friend...and in truth, a friend to countless other as well. 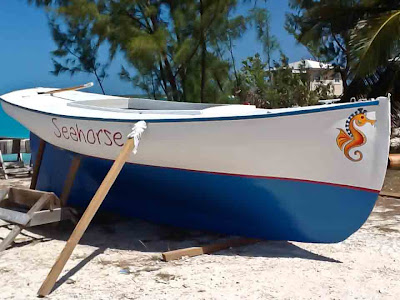 Black Point Settlement is home of some of the best “C-Class” Bahamian Sloops ever built like “Smashie” and “Seahorse” built by Van Fergersion and his son Bo. In the off season or when they are built or repaired they sit high on a sloping, iron rock, bank in back of the All Age School known as “da yard.” Every since I have been coming to Black Point Settlement I've wondered just how in the hell do they get a fixed keel, one ton boat from the iron rock to water with no mechanical help or conveyance without destroying it. I have always admired and been amazed by the Bahamian approach to projects like this. This year I found out how it was done and actually got to help launch “Seahorse” (something I can now check off my “bucket list). 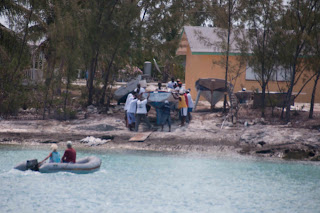 First, timing. “Tings” don't happen at an appointed time here. They just happen when “day” happen. People start showing up as if the time was set by some internal Bahamian clock – Seahorse's launch was no exception. I knew that much at least so I watched from the Turtle until people started to show and then jumped in the dink and headed for shore. No one was in charge or gave orders. Men just assemble on both sides of Seahorse grabbed “holt” and then bedlam broke out.

Everyone shouting at the top of their lungs, everyone in charge, and everyone with conflicting orders. “Pulleft! Pullrite! Slidtinga! Pickdastarn! Fardroll! Ramovedabord! Straitendatinga! Diswaymon! Disway! Slakline! Slakline!” It was a den of shouting, pulling, tugging, and all in opposing directions, plywood being slid under the keel, water pipe rollers between the keel and plywood, and slowly the boat pushed, shoved, pulled and rolled its self to the water with toes that should have been smashed and arms that should have been crushed left undone. All to a den of shouting that the multi-languages of Bedlam could not have held a candle too (imagine all those words plus many more shouted at the same time in a staggering rhythm and you will have it about right). Then she was a float, all was quiet, and the Bahamians left as if someone had punched their time clock, leaving Bo, Van, and I standing on the iron rock watching “Seahorse” rock to the gentle swell of her new home patiently awaiting her mast and lead.

For the record, I am still in awe (as in shock and awe and as in true respect for ) how Bahamians approach projects like moving Seahorse. All I can say is it is still a mystery to me just how the job was done and why no one was hurt, but it did happen and no one was… and I got to be part of whatever did.
One “ting certain Mon”...it was pure Bahamian...Pure Bahamian.

(I apologize for the photos. I screwed up and left the camera's autofocus set on manual..thus the blurry images) 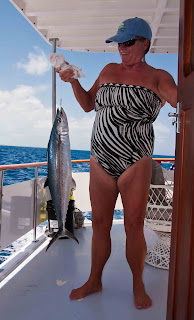 After a week of waiting for a window to head down to Georgetown and the 60th Family Island Regatta on Monday the15th one finally opened. It wasn't the best window in the world but it was the best we were going to get for at least another week with winds in the 10-15 knot range on the nose and 1 to 3 foot seas. So we were off out Dothom Cut at first light.We had heard that mahi were everywhere and we should get a boat load on the way down and we were anxious to try our luck.

We had hand lines in the water within the hour. Our friends had told us to fish with rigged ballyhoo with a pink skirt on it's nose, about 120' behind the boat and run about 7k. We zigzagged our way south running on and off soundings with no luck. It was Gigi's watch (of course, she is the fisher lady) and she had just fixed her lunch (again of course) and the Turtle was in about 100' of water when the fish hit .

We have no boat rod or reel (we will next year) - we use hand lines. Our technique is to let the fish drag behind the boat a bit before we pull him in to take the fight out of him and pray a shark doesn't get him before we do. We keep a bucket handy to dump the extra line in as it comes aboard. Gigi hauled and I dumped the line in the bucket, we swung him aboard and dumped him in the scuppers. The Turtle Crew had caught a 10 to15 pound Cero Mackerel (about a 4 to 5 meal fish). Cero is similar in flavor and texture to a King Mackerel. Within 30 minutes he was cleaned and in the frig ready for supper.

That evening at anchor in Georgetown off Kid Cove, we marinated a couple of pieces in zesty italian dressing, grilled him, and had him for supper with a little wild rice. Mmmm Gooood! 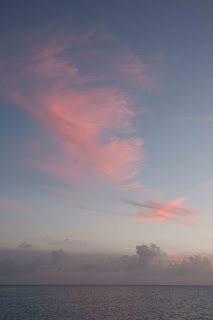 Our friend, Jim off “No Regrets,” says we should be off soundings for mahi. On the trip North we will try that...but Cero ain't bad by a long stretch and we still have 3 meals left in the freezer. 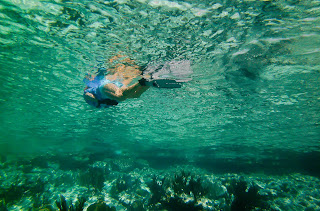 That Time of Year.. 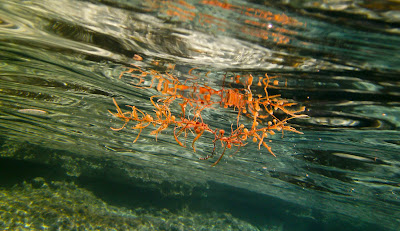 It is that time of year again... the time when all us cruisers feel a “stirring.” Like the great flocks of migrating water fowl just before the spring thaw something awakens in our very marrow and swings our compass Northward. A bit of restlessness descends on the anchorages and clouds our collective thoughts. Our senses are heightened to every color and sound. Every swim in that gin clear water is absorbed and savored to the fullest. Every sunset takes on a special heightened must see priority and the pastels of the dieing sun somehow are exaggerated. We visit our friends in the settlements with emotional hugs and smiles of “until next year” at every meeting. “Goodbys” take on a bit more permanence and heart felt poignance as friends depart - friends that we will not see again until the fall... and some never ever again in this life. All cruisers know that goodbys are part of the lifestyle but they still go straight to the heart (we have known people that quit cruising because they could no longer take the goodbys).


The words “fair winds,” “safe travels,” and “until next year” fill the air waves on the VHF as boat after boat hauls its anchor and heads North. North to the States. North to Canada. North to Europe. North to England. North to Home. North to Family and Friends. North to the “unreal world” we all left behind.

And Salty Turtle will follow in their wake North as soon as Family Island Regatta is over...but not yet..not, just yet. 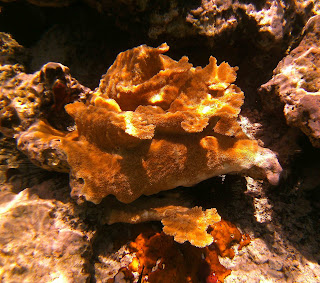 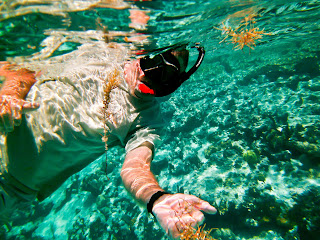 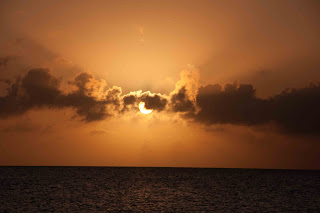