“The Sea finds out everything you did wrong..or did not do.” - FRANCIS STOKES

“There must be more to sailing than the mere setting out to sail from A to B via C. There must be exploration, not only of new areas of the ocean, but of new parts of yourself.” - TRISTAN JONES

Gigi's cousin Tom Cook joined us in Georgetown for National Family Island Regatta. Tom's wife Olga is in Russia helping her mom and Tom signed on as crew for the trip back to the states. We met him at Peace and Plenty's Bar (of course). Peace and Plenty's bar is the home of the Doc Lerman – The Doctor of Libation (read bartender). The Doc makes the best drinks in the Bahamas (and that's saying something) and if he likes you he will introduce you to some his “regulars.” I've spent many an interesting day in discussion some of Doc's friends. This year Gigi and I met John Sanders, the head of the Bahamian Post Office and his best buddy Vince (for the life of me I can't remember his name) who was second in charge of the Power and Electric Service for the Islands. Both x-racers and full time racing fans. The stories they told... .

To us National Family Island Regatta starts when the boats arrive as deck cargo on inter-island ships. Gigi and I make a point of being there for the unloading. The slings used to unload the boats are enough to stop the heart of most OSHA inspectors here in the States. The unloading and re-rigging is a show in its self. 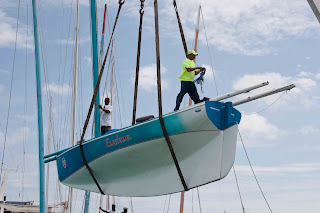 I was doing my usual wandering around taking pictures when I noticed a boy of about 11 or 12 sitting on a yellow bollard intently watching the boats as they came off the ship and their masts stepped. After taking a couple of photos I wandered up to the boy, introduced myself, and struck up a conversation.

William, that was his name, was the skipper of the brand spanking new E Class sloop, “One Bahama” in the Juniors Regatta. William is a bright young man. As each boat was unloaded he told me about her good and bad points and her skipper's “abilities.” He proudly told me he had finished second in the last regatta and he was going to “reach” first this year. When Gigi, Tom and I left William was still quietly sitting on his yellow bollard watching the boats lowered into the water. When we dropped by the dock a few hours later William was still there as intent on his boats as ever.

“One Bahamas” was built and sponsored by Sir Durwood Knowles, the first Bahamian to win a Olympic Gold Medal for sailing. Sir Durwood has spent his life encouraging young Bahamians to sail and to carry on the Bahamian boat building traditions. Sir Durwood would be happy and proud to know that those traditions were secure in the hands of William of the yellow bollard...and other like him.

Oh! The Racing was spectacular this year. Red Stripe out Black Point and Tida Wave out of Staniel Cay were tied for first going into final race with Running Tide from Long Island a distant second.

All three boats got excellent starts with the edge going to Red Stripe. At the first windward mark it was Red Stripe by just feet followed by Tida Wave...but Tida had to tack to make the mark. Which should have been no problem and kept her in second except.... Lady Maril another Staniel Cay boat just plain screwed up and held on trying to ooch their way around the mark. Lady M's bow man failed to tell the skipper that Tida was dead in from of them. Had it not been for our friend Smashie Furgerson who told the helmsman to tack just in the nick of time she would have center punched Tida and sunk her. As it was she did tack just in time to hit Tida a glancing blow and take both boats totally out of the race and the series. Red Stripe sailed a safe race and finished first for the race and the series. 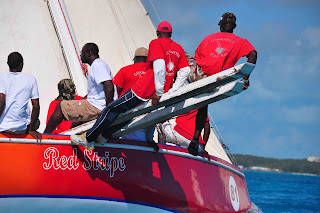 At 7:00 AM on the 8th of May Salty Turtle dropped her lines at Nassau Harbor Club cruised slowly under the twin highrise bridges that connect Nassau proper and Paradise Island. We were headed for sea and the USA. Nassau harbor is a busy place. This day was no exception. At the request of Nassau Harbor Control the Turtle and half dozen other boats held in place for about 30 minutes until a cruise ship docked. Then boogied out the harbor entrance before a second cruise ship came in. Like I said, Nassau harbor can be a busy place.

It was a beautiful day with clear sky and a 8 to 10 knots of South East wind – just perfect for a crossing. We ran at bout 7 knots down the Northwest Channel and Tongue of the Ocean fishing for Mahi but not catching. And hit the banks at Northwest Channel Light (that doesn't exist anymore. Only a short stub sticks above water) and headed across the banks. The SE wind went flat by the time we dropped off the edge of the earth into the Atlantic at Hens-In-Chickens / Great Isaac just N of Bimini at around 11:00 PM.

The winds according to Chris and all other weather web sites were suppose to do just that - go light an variable with flat seas and 5' swells for the next 3 days. But..when we hit the Gulf Stream the wind went NW at 15 and 3 - 4' chop in our face and square seas. Off Lauderdale I ran the boat in shore about 2 miles off the beach in hopes it would ease the chop. It did but it was still uncomfortable...and stabilizers don't do much for head seas....shit! The Turtle and her crew were tied to one of Vero Beach's mooring balls by 2:00 PM on the 9th. It was not the worst crossing I've ever had but it was not fun and my old ass was whooped.

Now the rest of the story...

Some times I amaze even me with my ability to screw up. About mid-way across the banks it was time to cook supper and switch from Port to Starboard fuel tanks (the generator only works off starboard tank). Salty Turtle had about 40 gallons of fuel left and port tank and about 190 in starboard – more than enough in starboard tank to finish the run to Vero Beach.
We cooked and ate a supper that could not be beat and I went back down to shut the fuel supply off from the generator so that I can turn the fuel polishing system on and continue to run on Starboard fuel tank (the polisher uses part of the plumbing for the generator and both can't be run at the same time). I always run the polisher when underway and polish the tank we are running on, in this case Starboard tank. Well....Old Vic accidentally turned the "return to aft tank valve" open...and we kept on keeping on...for a while at least (this little detail will become important and apparent later in the tale). 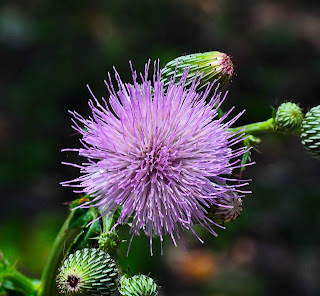 Six hours later Gigi and Tom were on watch, Vic was asleep, and we were about 20 miles out into the Atlantic when the port engine shutdown followed shortly thereafter by the starboard engine. I was awake and in the engine room as instantly as an old fart can move. It took a few minutes to shake the “sleepy fuzzy” out of my brain and figure out we had run out of fuel in the Starboard tank. Just where the hell did that 175 gallons of diesel fuel go? We could not have burned that much in 6 hours...more like 24 gallons? No time to think about that now. I switched to port and bled both engines. This little operation took a lot longer than it takes to write this and we positively will not talk about the “diesel geyser” I produced when I pressurized the fuel filters with the electric lift pump and took my first ever diesel shower. Gigi fired both engines and after a few tense moments they cranked and we were on our way again.
That was the good news. The bad news was we did not have enough fuel in Port tank to reach Ft. Pierce.

After a few minutes to clear my fuel fumed soaked head and a large cup of coffee I figured out the fuel had to be in the aft tank, went back to the engine room, and yep! the handle on the aft tank return line was open. So in theory at least, all 175 gallons that had been in Starboard was now in the Aft tank put there by the fuel polishing system. We ran on Port until dawn. Then shut down both engines, shifted the polishing pump to deliver fuel from aft to port tank to make sure there was no air in the fuel line (and the fuel was in fact there) and then re-cranked on Aft. We were back in business and with enough fuel to reach Ft Pierce. Yee!! Ha!!
Like I said, sometimes I amaze even me at my ability to do something really dumb. Tom jumped ship in Vero (can't figure out why) and Gigi and I continued on to Palm Coast alone. We anchored off Titusville on the way and were lucky enough to have the anchor down and a rum and tonic in hand in time to see an Atlas V launch...pretty cool.
We are currently tied up in Palm Coast Marina waiting for the diesel shop in Dayton to rebuild the generator and port engine high pressure fuel pumps. With luck we will be back under way by the end of the week. North Carolina here we come...baring something else breaking, of course.
Fairwinds and Rum Drinks,
Vic Copelan
PS – Thanks Tom for the help and for your excellent dingy driving. It sure made taking photos easier. 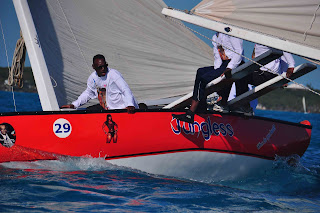