“It's all about taking advantage of opportunities that come your way, because, if you wait until tomorrow, the chance will be gone forever today.” A quote from Scotty a friend of James Rosemond the author of “Hiding on the Bottom – Mid Life Misadventures Down East”....and they are about as true a words as ever spoke.

“The best moments in life are often those stolen.” Vic Copelan

“Can't hardly tell boats from cars no more, with all the shine and chrome. And the noise of them big outboards---Lord! Scaring the last fish out of the bays! Hit the throttle when they hit the water, take off howling, throw up big waves that bash our old wood boats against bulkheads. No experience of fish or tides or weather, no knowledge of backcountry, no idea where in the heck they might be headed for, let alone why, just roaring around bouncing off each other's wake like damn fool chickens with their heads cut off!” Quote from Peter Matthiessen's “Lost Man's River.” 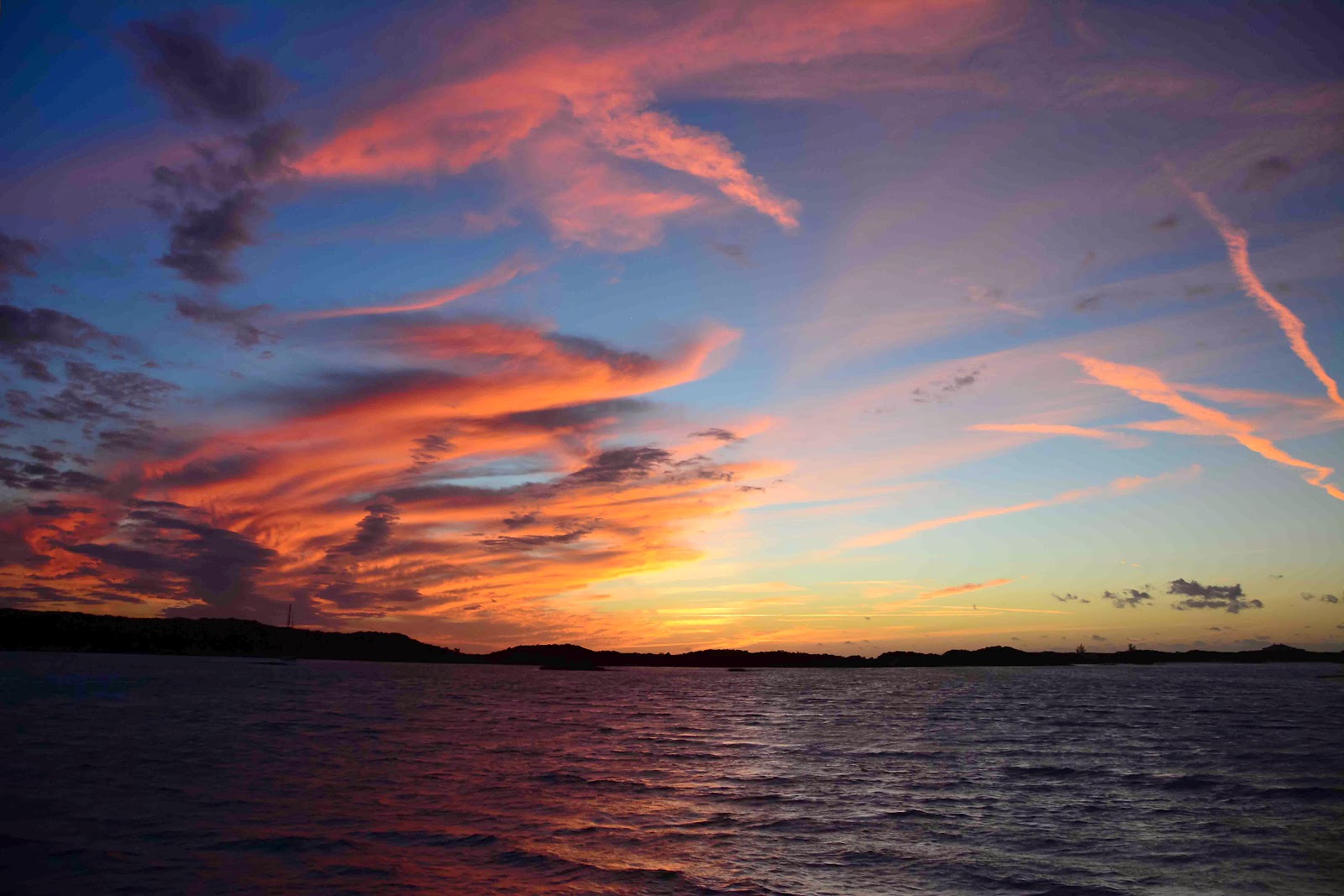 It has taken us about a month to decompress and accept the rhythm of life dictated by the ebb and flow of the tides in Pipe Creek. Here all life follows the gentle shift of the tides and the ever changeable weather. Here there are few outside influences that govern our lives other than those of the natural world and a few like minded friends. Everything we do is metered by the tides and weather.

We snorkel at change of tide. Hunt the cuts (inlets) for lobster at slack of tide. Walk the beaches and tidal flats when the wind gods allow. Make the 5 mile dingy ride to Staniel Cay for groceries and a rum punch or two at the Yacht Club when those same same wind gods don't stack the waves against us and allow passage safe enough it will not beat Old Vic to death. In short Pipe Creek is my version of heaven...as long as you follow the rhythm. But there is one “proverbial fly” in our Pipe Creek “ointment.” The best places to anchor are either in “the causeway or the runway.” 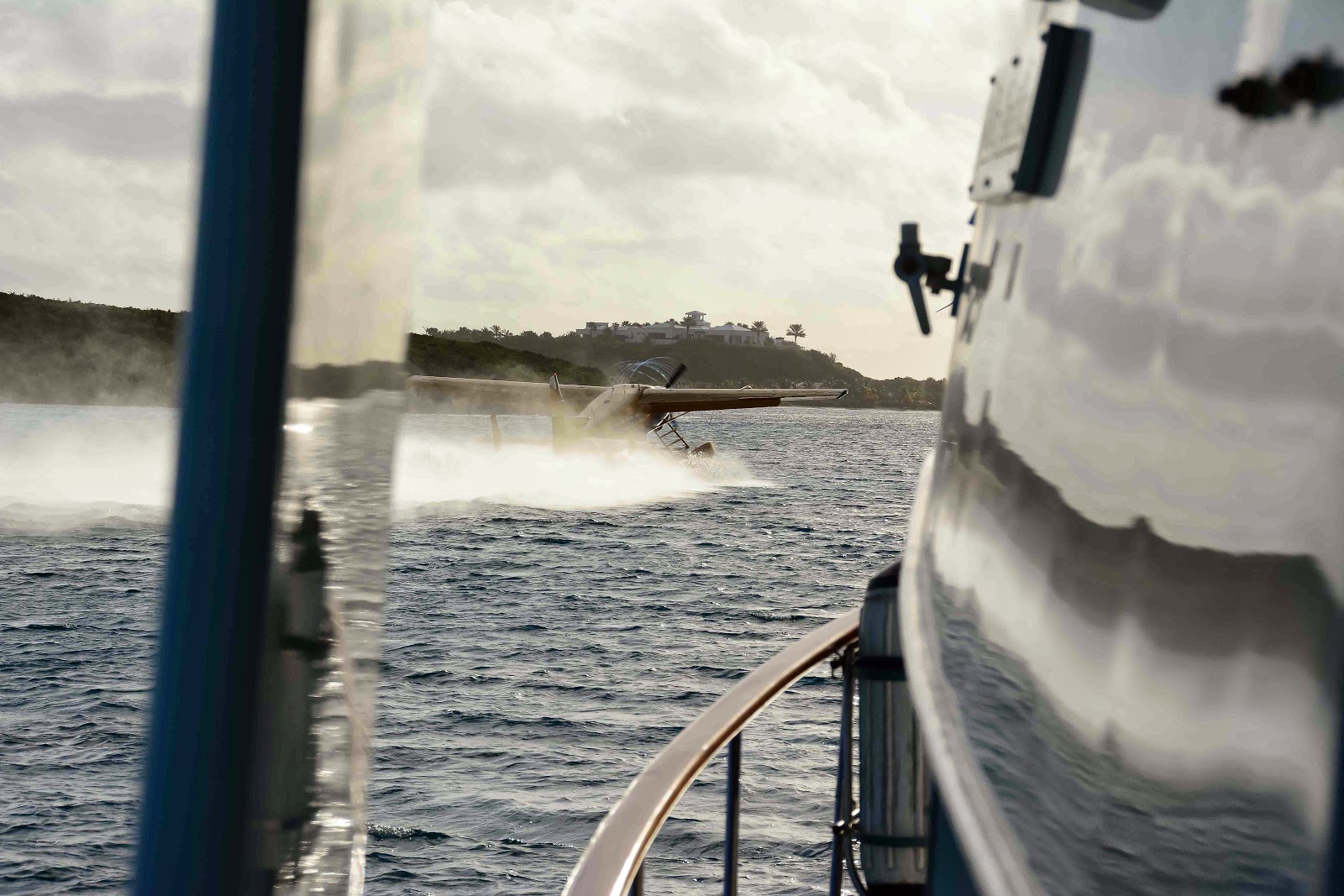 Take a look at the chart of Pipe Creek. See the blue tape triangle, that is where we are anchored. If you look close you will see there is a reef between us and the deep water channel off Thomas Cay. Like wise there are a series of small cay called the “Mice” between us and the deep water off Rat Cay. The “casuseway” between Thomas Cay and the small reef is a natural channel for boats moving North and South from Compass Cay Marina, the Bahamas Land & Sea Park, and the Staniel Cay. Look to the South of the Turtle's anchorage and you will see Overyounder Cay and to the North and West, Little Pipe Cay. Both are very private resorts. Both have their own float planes that service the Cays shuttling guests and supplies to and from their islands. The natural “runway” is right over the top of our anchorage under normal wind directions (takeoffs and landings are done into the wind). 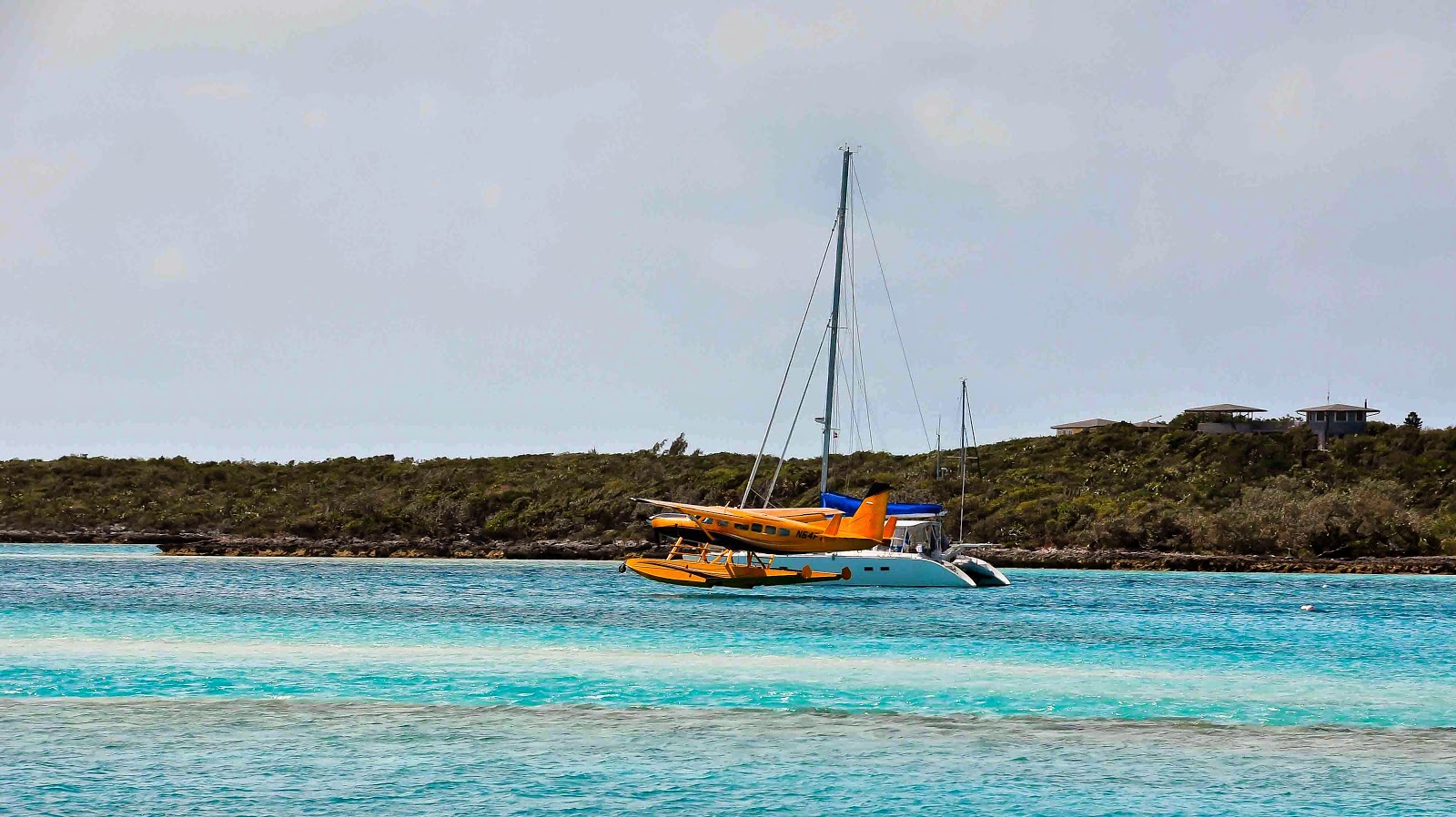 So if you anchor here in good sand (good holding for the anchor) you have choices to make. The “highway” where boats pass you at speed, some throwing huge wakes or the “runway” where float planes can be so close you can tell if the pilot needs a shave. 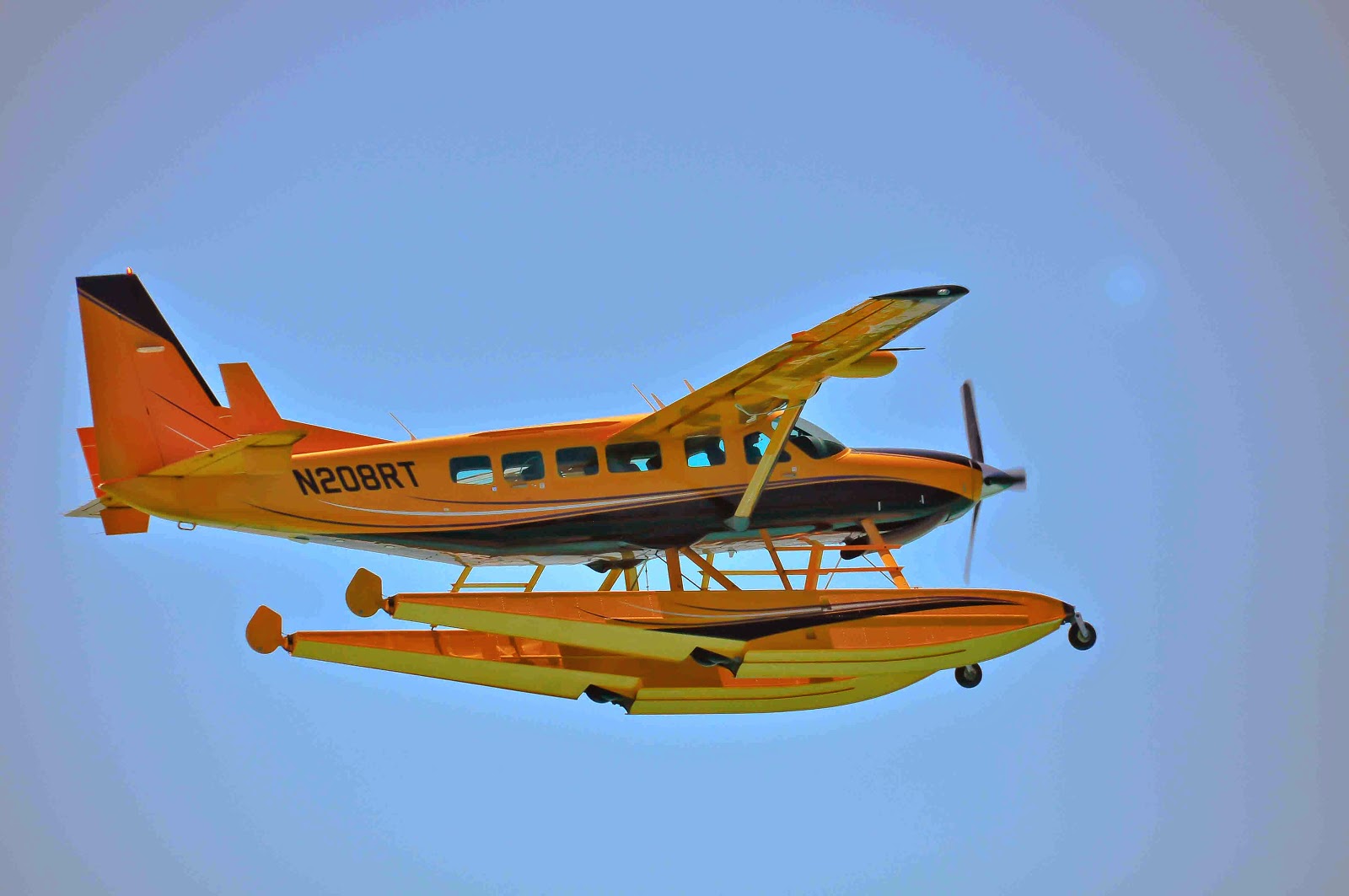 A few days back during a not so fun West wind we had a couple of planes out of Little Pipe land so close I literally could have hit the plane with a rum bottle and not had to strain my pitiful throwing arm. The pilot usually waves as he lands and I return the gesture...we have become “passing” friends.

Anchored in the “highway” like our friends Joe and Carol on “Just Ducky” there is a bit of good news. The current is so swift and the boats have to pass so close the wakes don't last long and don't pose much of a problem... but some times they can rock ya pretty good. The bad news is the sportfish boats off most of the mega yachts and local Bahamian boats have little respect for “anchorages.” It is what it is.... 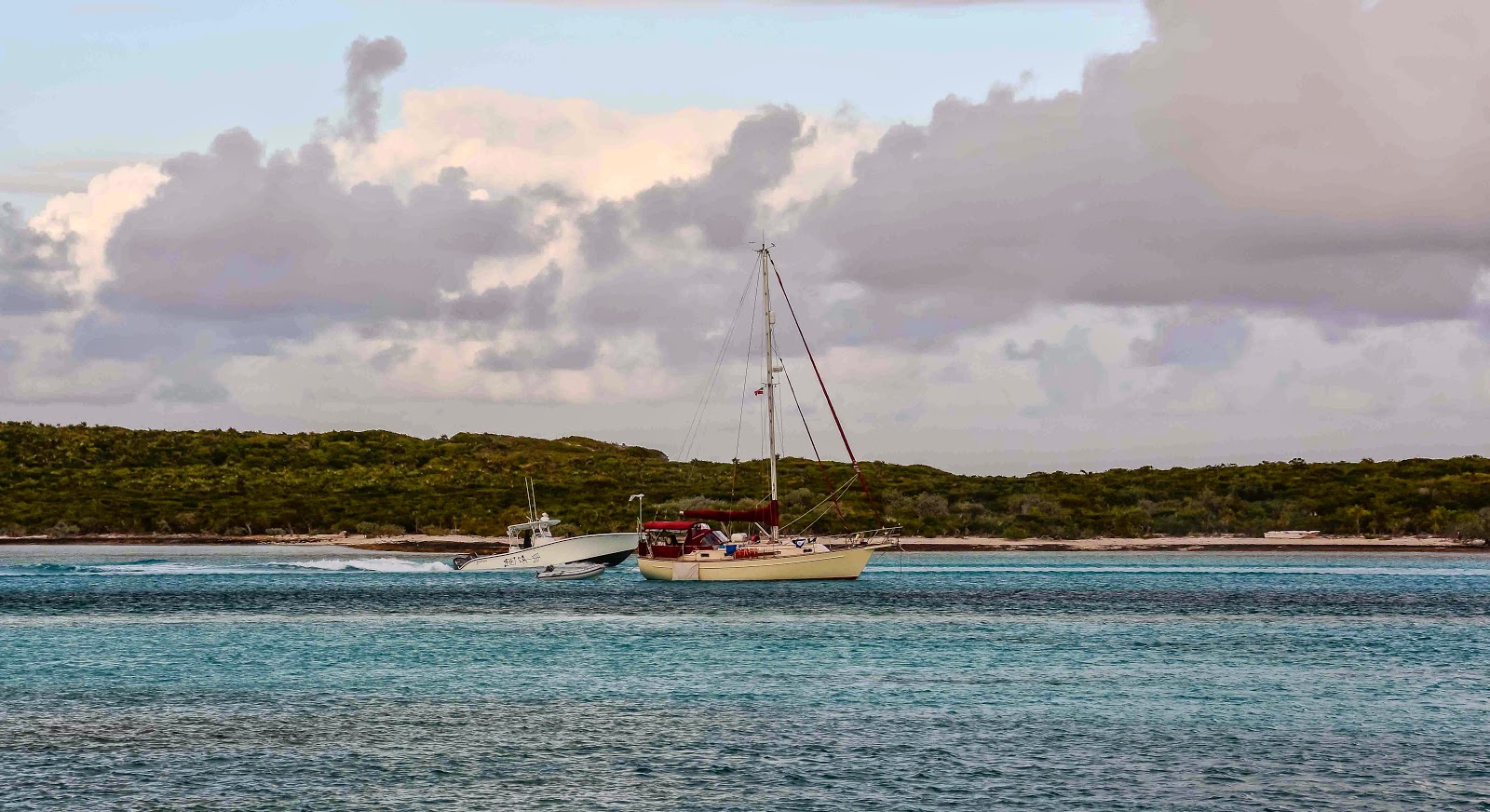 In exchange for an occasional salty prop wash from a passing plane or a good rockin' from a passing boat we get to enjoy a well protected anchorage complete with some of the best snorkeling in the Bahamas, gorgeous beaches, “pink” sand flats to walk ( I think made of broken conch shell), and solitude – the same area the paying guests on Overyounder and Little Pipe get to enjoy. Oh … and by the way, you too can stay at Overyounder Cay. It only cost $500,000 a week to rent. As far as the Turtle is concerned, Gigi & I will just keep enjoying our anchorage in the “runway”..thank you very much.

It has been an unusual week here in Pipe Creek. It started Saturday night with the arrival of a cold front and 20 knot plus West winds. Since then the winds have veered back and forth between West and North West and stayed between 15 and 30 knots...and those winds are not to let up until Friday morning. Five days of West winds are un-heard of in the Bahamas in winter. In my 8 years of coming down this is a first.
When the winds go W at better than 10 knots it sends every boat skittering for shelter looking for a rock to hide behind and at 20 knots it is time to honker down and wait them out. After boat chores are done you are left with books and movies, books and movies..unless you are a bit younger than us and then there is another option....and I do wish I were younger, at this moment anyway. Under these conditions it doesn't take long for “cabin fever” grab you by the short hairs and not let go.


It reminds me of a time many years ago when I was young. I had had my Ranger-29 about a year and it looked like perfect weather to go to Cape Lookout. Connie and I gave Becky (Connie's sister) and George Shennan a call and invited them to go to the Cape with us. Noel (my son) was about 10. Becky and George had a son a, James, year younger than Noel and a daughter, Rebekah, about 4 years old. No problem after all my 29' sailing “yacht” had 6 berths..right? Connie and I in the V-berth, Noel and James in the quarter berth, George & Becky in the main cabin and we make a pallet on the cabin sole for Rebekah...done!

It takes 2 days to get from Washington, NC to the Cape by water so we really only had to deal with that arrangement for 2 days (one going and one on the way back). The plan was the kids would camp on the beach at Cape Lookout and George and I would take turns spending the night with them. Good plan..but we made the mistake of trusting the weather gods.

We had a great sail down, spent a wonderful night at anchor in Cedar Creek, and arrived at Cape Lookout just a little past mid-day. During those days all I had for a dingy was an 8' rowing pram built by your's truly that we had christened “Noel's Ark.” It took 3 trips to take all the crew, camping gear, and ships stores (beer) ashore but by 3:00 in the afternoon all the chores were done. James and Noel took off to explore the Lookout Bight, Becky and Connie were wading the shallows and keeping and eye on Rebekah as she played in the tidal pools, and George & I were doing what we do best...nothing 'cept suckin' down a cold one. Life was good...too good.

About dusk the wind blew up out of the N. North wind? No N winds were predicted. By the time I rowed the girls out to the boat it was blowing 20 or better..and still I had to go back and get George and the boys. It literally took me over 30 minutes to row the 150' out to “Oconee.” It was quite apparent that there would be no going back ashore for the night..we all would be spending the night on the boat...again.

I woke the next morning and the wind had actually built and Rebekah was not in the cabin. I panicked! She was not in the quarter berth with the boys! Oh my God, had Rebekah gotten out on deck and fallen over board!? I ran to the cockpit and there she was watching the sun come up. The minute she saw me she said, “We got wind we can go sailing!” I grabbed her and gave her a great big hug of relief with thoughts of “what if” running rampant in my mind.

We played games. Read stories. Drank beer. Listen to music and told “lies.” Three days later the winds had dropped out and we woke to the cry of gulls and the gentle lap of water on the hull. It was a race between George and I to see who would get the privilege of take the kids ashore.

And you know that trip still holds a special place in my heart. I don't think there was a negative thought or fuss the whole trip. Attitude is everything and brother we had it right for that voyage. “Cabin fever” is what you make of it.

Time to wrap this up and head for Scorpio's Bar for the Super Bowl Festivities. We have arranged a table with our friends Bobbie and Francie on “Barefootin.'” Should be fun...Bobbie was a little surprised at the spelling of his boat's name...but I sort of like it. 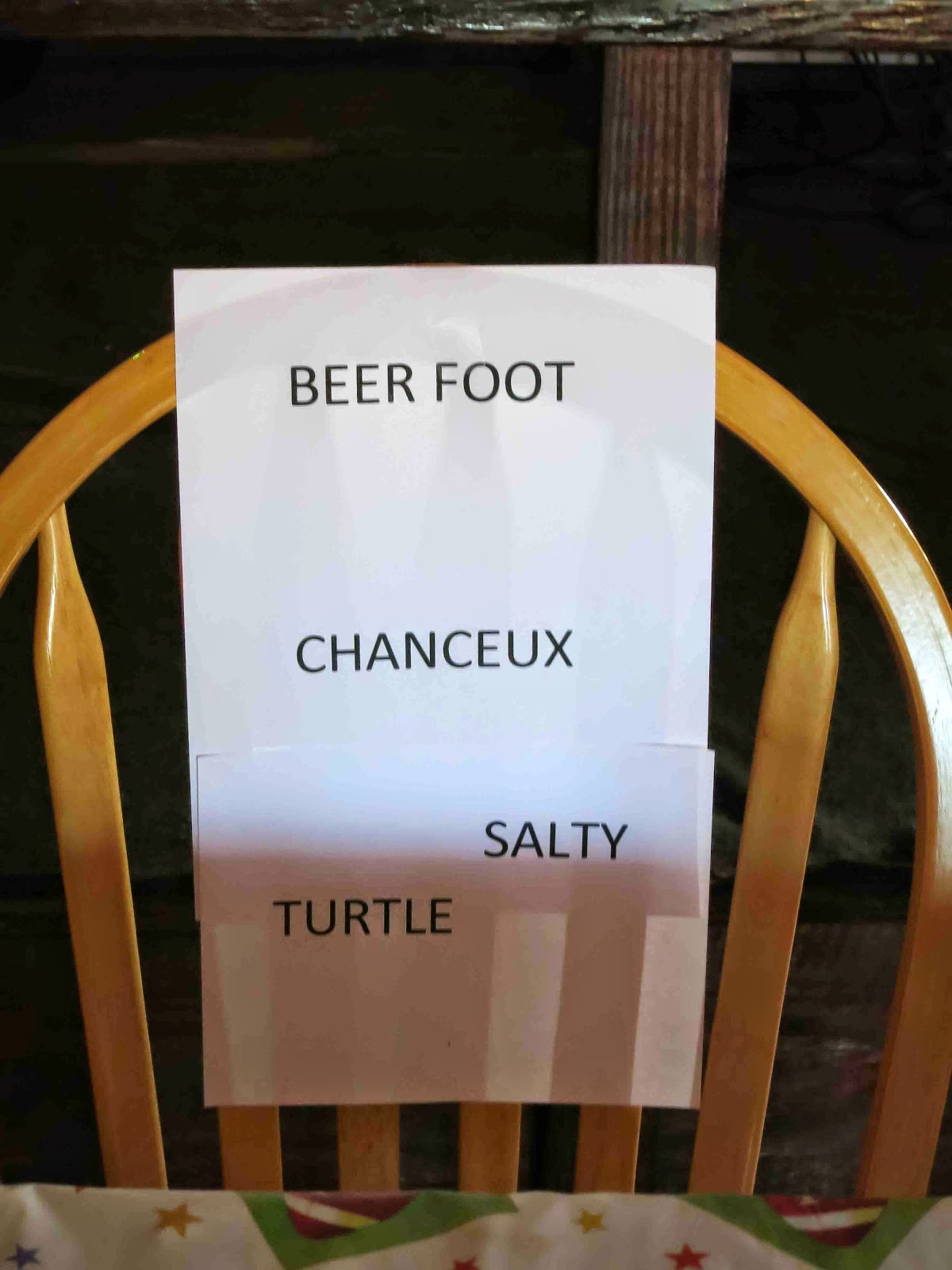 Love reading your adventures. Your boat is fine, we hear your bilge pump come on every 6 minutes!!! Boats at Matthews Point have been sitting on the bottom for several days!!