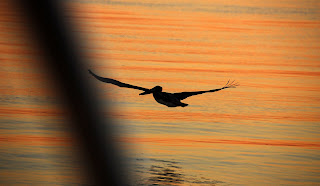 
We left Matt and Diane Zender’s dock on Tom’s Point Ck. at mid-tide and it on the rise. The creek is a bit tricky and more easily transited with a touch more water in it and a forgiving rising tide. We knew we could not make Beaufort in time for the last bridge opening so we didn’t try. It didn’t matter the day was beautiful and the trip a lazy motor thru the heart of the “Lowcountry.”

The “Lowcountry” streaches from south of Charleston down to the Marshes of Glynn in Georgia. The ICW weaves it’s way thru the salt-marshes fed by tidal creeks with names like: Wadmalaw, Toogoodoo, Ashepoo, Jehossee, Coosaw, and Daufuskie. Names that flow off the tongue like the 7 foot tides that pulse through the Lowcountry bringing life to the estuary. By mid afternoon we went to anchor in Bull River about 14 miles from Beaufort. Bull River is wide open and beautiful, surrounded by salt-marsh with islands of pine and live oak sprinkled across the viewscape.

The morning greeted us with another beautiful day - Genevra’s birthday. She had Vicki Skemp’s Flan for breakfast - she can’t eat cake (gluten intolerance) but loves flan and Vicki’s is scrumptious. We are now the same age and I can officially call her, “The Old Lady.”

Three hours after hauling our anchor and we had the anchor down in Beaufort and were headed for shore and lunch on the water front. Beaufort has done a great job with their water front. It is designed for kids to play on the green, folk to sit and enjoy the water, a great dingy dock, and enough bars to keep Old Vic happy. We decided to play tourist and do a walking tour - if you are here take one it is well worth the $13 bucks.

I have to relate one of the stories told to us by our guide - a very southern lady. A little history first... . Port Royal / Beaufort was spared the ravages of Sherman because they fell to the “yankees” early in the “War of Northern Aggression” (better know as the Civil War). All the inhabitants of Beaufort boogied just prior to the Union Army marching in and taking over. The result was all the land owners lost their homes and most of their belongings. After the War a few of the Southerners returned to Beaufort and were allowed to purchase their homes back for back taxes. The story I’m about to tell relates to one of the lucky few.

Mr. Fripp had lost his only son in one of the last battles of the war and he returned to Beaufort vowing never to shake hands with a yankee in what was left of his life. ...And all of his new neighbors were yankees occupying homes the Southerner had vacated. Yet he was one of the “lucky.” He had money and could afford the taxes to purchase his home. He returned to Beaufort confidant in the fact he would soon be “home again.”

He did not count on the corrupt, carpetbagger, government. Unknown to him, they were conspiring to take his home. He was told he had to bid on his own home at action. He did and won the bid but at 3 times the cost. He explained to the government that he did not have that much cash on him but could have it in 3 days (the time it would take to sail to Charleston and back). They agreed and Mr. Fripp left for Charleston with the tide.

After he left a young Yankee entered the tax office and heard the officials laughing about how they were going to steal Mr. Fripps home by having someone else purchase his home just prior to his return on the third day. Contrary to popular opinion there are a few honest Yankees, what he heard incensed the young man. He dug into his own pocket, then went door to door to the Yankees that were now neighbors of the Fripp home. Because of their generosity he came up with enough money to purchase the Fripp property until Mr. Fripp could return and claim his own. He beat the tax officials at their on game with just minutes to spare and left them in a rage.

When Mr. Fripp returned our good Yankee gave him the deed to his home and explained what had happened..or almost did but for his good, Yankee, neighbors. Mr. Fripp broke his vow. He now had his home back thanks to and one honest Yankee and new good friends too boot.

Sunday morning broke bright, clear and cold with a biting West wind. G cracked the hatch and coined a brand spanking new word when she announced it was “nippling” cold (no explanation needed I’m sure). We decided to leave anyway and ease down to Port Royal and were at anchor by 11:00, off the seafood house in Port Royal.

Port Royal had been a thriving deep water port until the concrete plant went out of business. Today it is a sleepy little southern town full of live oak, happy children that roam the town as if they owned the streets, and big plans to develop their waterfront. I for one am glad I got to see it before it was “developed.”

On Veterans Day we eased down the Beaufort River past Paris Island with its water towers emblazoned with 1-800-MARINES and gave my friend Chuck a call back at Matthews Point. Chuck was a Marine during WWII and I always try and remember him with a call on Veterans Day to thank him for what he (and all vets) did for us during the war. Chuck said, “You know I trained at Paris Island. The Marines have a tradition on the Island, if you have a beef any enlisted man can just go up to any officer and talk to him about it. They also have a 12 foot fence with razor wire on top between the enlisted men and the officers.” And then just laughed his infectious laugh. Chuck believes laughter is one of the worlds best medicines.

By Noon we had our anchor down in Wright Creek. We were only 10 miles from Thunderbolt, GA, our destination, but it was also low tide and Field’s Cut to the Savannah River is “skinny” water.

We were up a 7:00 the next morning and caught the top of the tide (tides are 10' in this section of the Waterway) to clear Field’s Cut to the Savannah River. For those of you that have not poked your nose out into a free flowing river like the Savannah in a small, low powered sailboat like the “Island” it will leave it’s mark on your boat handling skills. One minute you are trudging along at a brisk 6 knots and the next you are making 6 forward and 3 knots sideways. By 10:00 AM the Island was tied securely to Thuderbolt Marina’s transient dock. We are going to spend a few days exploring Savannah and the surrounding area and then (hopefully) head South outside.

PS - The Bull Mastiff is “Truman” a new friend we met in Beaufort. He is still a puppy and weighs in at close to 250 pounds and is expected to add another 40 before he leaves puppyhood. 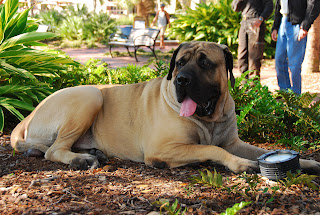 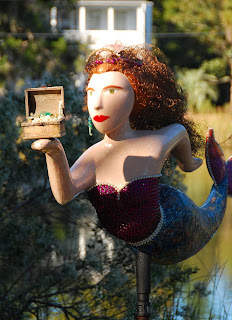 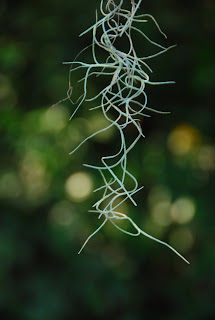 Ummmm, absolutely love the pictures but have one little bitty request. Hand G the camera occasionally and let me see your handsome,smiling face from time to time.
Love ya!

Love the pictures -- and how nice to know "my" flan is traveling!

I'm so happy for you two. I'm also green with envy. Living the dream - can't do better than that. Please have enough fun for me too. And Victor you can pick up the camera too and let us see Gigi every now and then and get someone to take pictures of both of you. Take care, be save and hugs to both of your.