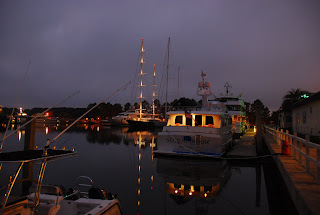 Charleston City Marina’s “mega-dock” may be where the rich and famous go to dock their 100' plus yachts but I know where they go to get them fixed and painted - Thuderbolt Marine in Thunderbolt, Georgia. They have facilities capable of hauling and painting yachts of over 200' in length (see photos). How much does it cost to paint one of these boats? The dockmaster said 7 figures is not uncommon.

There were 2 sailboats here with 165' masts, 6 sets of spreaders, with red lights at the top of the masts to help aircraft avoid hitting them. “Perseus,” the yacht you see in the photos, is 167' long, 40' beam, and draws 12' board up and 22' center board down. They were here for a new suit of sails (11,000 square meters of sail cloth) and to take on a new captain. For you sailing types, take a look at the photo of the guy standing on the bow next to the roller furling gear and the photo of Perseus coming back into dock for some sense of scale. The boat next to Perseus is a 42' Island Packet. By the way you too can rent this boat for a week for only $165,000 - including captain and crew of 10 of course.

G and I decided to take the bus into Savannah for a walk around the city and immediately struck up conversations with a couple of Thunderbolt natives. G spent the bus ride deep in conversation with a 60+ lady that was working part time as an assistant librarian for a local school. She is determined to make a difference in young ladies lives by regulating asking for permission to “talk” to them and help give them the guidance they don’t get a home. I made friends with a gentleman of indeterminate age that had been a photographer in a previous life. He reached in his pack and dug out some discount ticket to some local bars. That’s what I love about the South, friendly, open, people with generous souls. Sometimes I forget how much I like and miss Georgia and it’s people - today was a reminder that southern hospitality and the old south still exists. By the way, both people were Blacks or as my Mom would say Negroes.

This will be a bit technical for you non-boaters, live with it. Georgia has not maintain their waterway the way other states have and thus it is fast returning to it’s natural state - an endless progression of shallow shifting channels winding their way south to Florida. Some of the worse sections have silted in to 2 to 3 feet at mean low water. That’s the bad news. The good news is Georgia has 7 to 9 foot tides so it is do able. Gigi’s Island draws 5.5' of water. We elected to run the Georgia portion of the waterway at mid-tide (3 hours before high to 3 hours after).

So far our plan has worked. The run from Thunderbolt to anchor in the Wahoo River was uneventful with the exception of “ Hells Gate,” a short cut between the Little Ogeechee and the Ogeechee Rivers. We had timed our arrival at Hell’s Gate for about an hour before high tide so if we did run aground the water would still be on the rise and would be a little more “forgiving.” When we got there the Little Ogeeche was producing a 4' standing wave set up by swift current rushing into the river with an opposing wind trying to drive the water out, add the same thing happening on the other side in the Little Ogeechee with everything meeting in the middle of Hell’s Gate and you have one heck of a ride. We saw no less than 10' of water in the cut by the way. ...And G and I are glad to have it behind us.

The next day’s run to Jekyll Island gave us more skinny water to face but it too was a non-issue because we ran it on the high part of the tide. In many ways, the Georgia section of the ICW has been easier than some others because it forces you to run at mid-tide and takes some of the worry about running aground away.

We tied up at Jekyll Harbor Marina, primarily because it was damn cold and we wanted HEAT. We will sit here through tomorrow and then head for one of my favorite places on the ICW, Cumberland Island.

Jekyll Island was the home of the Jekyll Island Club other wise known as the Millionaires Club. The Club was founded by people like J.P. Morgan, Cyrus McCormick, Joseph Pulitzer, a Mr. Rockefeller, and many others as a “winter retreat.” The State of Georgia, in a controversial decision back in 1947, condemned the property, purchased the Island for $675,000, and turned it into a State Park. In the words of the Governor at the time, “Jekyll now is a playground for not just the rich but for every citizen of Georgia.” Never mind that right after the “taking” the good governor and his “buds” visited the now vacant homes of the “rich and famous” and absconded with everything that wasn’t nailed down.

Despite the thievery, Georgia has done a great job with the restoration of the old mansions and has created a park for us all to enjoy. Today, you too, can play crochet on the old court in front of the “Club” (provided you have proper attire of course). In addition they have established the “Georgia Sea Islands Sea Turtle Preservation Center” here on the island. If you are ever in this area it is well worth a visit.

PS - I think I’m getting use to this damn cold weather...and I don’t like even the though of getting use to weather that short are not common attire. 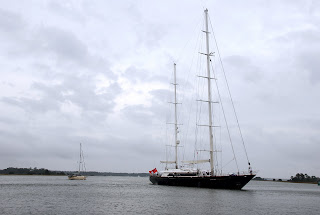 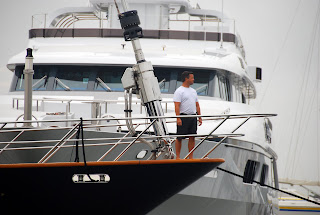 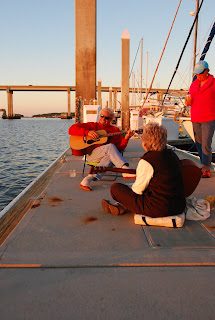