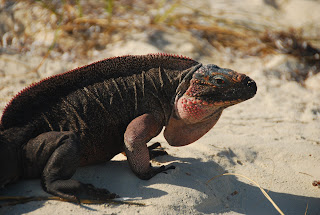 We finally got a “weather window” to cross the Yellow Banks to Allan’s Cays (not a good one but it would do - 10k on the nose...again). The Yellow Banks are called the “Dreaded Yellow Banks” for a reason, because for about 3 miles the water is shallow and strewed with coral heads. As it turned out it was not so bad - me on the bow “pointing” and Gigi steering. The heads are very visible and easy to dodge as long as the sun is high. I would not want to even think of doing this passage after dark.

By 3:30 we had the anchor down snuggled up to the west side of Alan’s Cay with a gentle East wind blowing. We were in the “real” Bahamas at last with Nassau, the dirty, busy, crime and politician filled Capitol in our wake. Allan’s is really a series of small Cays that run roughly North South with Allan’s to the East, Leaf to the West and SW Allan’s to the South with an anchorage in between Alan’s and Leaf and a very small anchorage almost in the cut between the Islands just North of SW Allan’s. The anchorage when we arrived was quite full so we just snuggled up to the Western shore of Alan’s instead of trying to worm our way into an already tight anchorage.

In settled weather this place is paradise. The water is crystal clear with plenty of beautiful healthy reefs for snorkeling. Leaf and SW Allan’s have two sugar sand beaches both white as bleached bone. And of course, they are the home of one of the few remaining colonies of native rock iguanas left in the Bahamas. They are quite tame. As soon as you land a dink on the beach they stream out of the bush expecting food (see photos). There is even a boat that brings tourist over from Nassau daily to feed them. It is a “sight”. The boat pulls into the lagoon, blows its horn and the iguana pour out of the bush even before they land.

The wind had picked up by the second day we were at Allan’s, 3 Canadian boats left the anchorage, and we moved inside the lagoon for better protection. Then we were off in Mule for a bit of snorkeling. The reefs are shallow so all you really have to do drift and look. It is like swimming in an aquarium. G filled 2 pages of her notebook when she got back with species of fish and coral we saw - she was in haven. We would probably be there still if a series of cold fronts not was moving in and we wanted a more protected place to hold up. Allan’s is a good place for settled weather but it is a “tight” anchorage and the boat in front of us by morning had already drug his anchor a bit. It was time to go.

There are very few “all weather” anchorages in the Exumas and many of them are in the cuts between The Great Bahamas Banks and Exuma Sound. We elected to take a slip at Highborne Cay Marina and sit out the weather there.

A word about the “cuts”... First there is always current and they are narrow. I am going to try and describe entering Highborne Cay Marina to give you a feel for what navigating these cuts are like. The Marina is set in a small harbor on the south end of Highborne. You enter thru a narrow (verrrrry narrow - 100 feet or less) cut between Highborne Cay to the North and Oyster Cay to the South. Because of the current and the tiny opening the water stays churned up as if a hundred power boats had just crisscrossed the area. The water color varies from yellow (sand and shallow) to deep blue (20 feet or more) with in a few feet of each other. You literally have to almost put you starboard side on Oyster Cay to stay in deep water. Immediately on entering the lagoon you hang a hard right, line up a couple of range markers and throw the coal to the engine to keep the current from pushing you into a reef before you make the harbor’s breakwater. Once inside everything is calm. I suspect I’ll get use to “cuts” in time but for now, 3 days later my heart is still pounding.

Highborne is a gorgeous island, white sand beaches, healthy reefs, and peopled by helpful, friendly folk. It was one of the first islands inhabited by Loyalist after our “Civil War” (what they call our Revolution). There are still ruins of those early homes sprinkled all over the island. It is an Island to walk and explore. An island to sit and read. An island to snorkel and swim. An island with a few surprises and sites we would have missed entirely if the weather had not nudged us in here.

First the harbor has “pet” shark, snapper and rays and no fishing is allowed in the harbor. Yesterday we walked down to the fish cleaning station near the jetties and saw our first shark feeding frenzy. A group of approximately 20 nurse shark, lemon shark, and reef shark were dining on the leftovers from wahoo that were being cleaned. One of the fishermen put a wahoo carcass on a line and commenced to “tease” them with it (see photos) - the water was boiling with hungry shark. I saw one lemon shark literally clear the water to “sample” the wahoo.

Each morning we have had guests for coffee. When we move out into the cockpit ruddy turnstone (shore birds) and small black grassquit (verio type birds)come begging. They are so tame they even came, looked down in G’s coffee cup, and then give her the “this ain’t eatable” look.

On the western shore of Highborne Cay lies a reef that is quite unique and ancient. Stramatolites are some of the earliest forms of life on earth dating back over 3 billion years. Until the early 80s they were thought to be extinct. Since then living examples of these reefs have been found off the coast of Highborne and a few other Cays in the Exuma chain. They look sort of like flat top mushroom of enormous size. They are quite impressive (see photos).

Yesterday evening late, a Catalina 34 pulled into the slip next to the Island. I said to myself, self, that boat looks familiar. It was my New Zealand friends, Carl and Penny, that Mike and I met last year at Bimini and cruised with to Royal Island. Carl makes the best sangria I’ve ever put in my mouth. Friends come and go but the next anchorage may bring another reunion, cocktails, and time to catch up on each other’s lives since last our paths crossed. That’s cruising and one of the reasons I love this life.

Tomorrow is a pig roast on the beach and then (hopefully) we will be headed south to Warwick Wells, home of the Bahamas Land / Sea Park for some serious snorkeling. 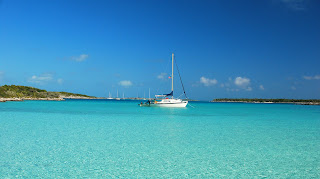 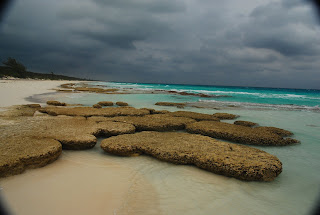 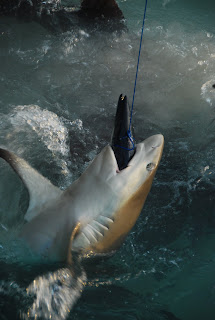 I wanna go next time, can I go?