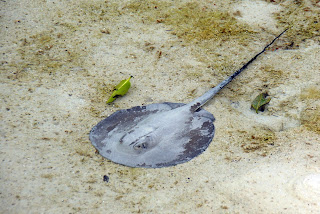 Warderick Well, North Mooring Field, Exuma Land / Sea Park: 01/18-25/2009, 31nm
We grabbed a very narrow weather window on Sunday the 18th and sailed down (yes actually sailed for a change) to Warderick Wells in the rain. It was either wait at Highborne 3 to 4 more days or go...and it was getting expensive. Luckily we missed the waterspout that went thru Wardwick a couple of hours before we arrived.

By the way, the folk at Highborne have a rather twisted sense of humor. There is a sign at the top of the island that reads,"bus stop." Of course there is no bus, to stop. The island is only 3 miles long - who would need a bus. The map of the island also lists a "spring." There are signs along the paths that crisscross the island that actually lead you to said “spring.” When you get there it is an old bed spring tied in a tree. What a hoot!

I'm beginning to get used to reading the water and to trust my judgment a little more (read: my asshole ain't puckered near as tight entering tight channels between islands). Every where we go I say, "It can't get any prettier than this and it does” as the photos attest. Warderick Wells north mooring field (no anchoring this is a coral park after all) sits in a crescent of deep blue water between the island and the aqua and yellow of the sand flats. It is protected on the east by Warderick itself and west by numerous small Cays and sand flats. The next 2 days brought that “big blow” out of the west we were expecting. For those of you planning to pass this way this is a great spot to sit out a westerly blow.

The island is full of wild life and most of it quite tame. The Banana Quit (3" small bird) are so tame they will eat right of your hand. I never see friendly small birds that I don’t think of my Mom. She would have loved this place and especially the Banana Quit. G is beginning to get pissed with them coming into the cabin to “explore” and “evacuate” (their bowels). It has turned into sort of war of wills and I’m not sure who is winning.

The last few days have been “cool” for the Bahamas (mid-60s) and has really limited our search for good snorkeling spots. We finally found a small reef near Emerald Rock with an abundance of sea life including a school of Silver Snapper and couple of huge Nassau Grouper. I expected to see lobster the size of small tanks but am yet to see any of any size. The reefs around Alan’s and Highborne Cays were more diverse and healthier than the Warderick Wells area.

Warderick Wells is full of trails over pot-marked sandstone - sort of like walking on swiss cheese with the hole edges like turned up knife points. Good walking shoes are a must. The “trails” are marked by cairns (small piles of stone). Without them you would loose all sense of direction. For those of you familiar with the Tampa / St. Pete area of Florida you will remember the “Sunshine Causeway Bridge.” Tampa and St. Pete have nothing on Warderick Well. They have a “Sunshine Causeway Bridge” too (see photos).

At the top of “Boo Boo Hill” is a cairn built out of boat markers and of course we added ours to the list of folk that had made the climb. Boo Boo Hill got it’s name because it is haunted. Around the turn of the last century supposedly a ship load of “missionaries” were lost on the reef. Today, if you walk to the top of the hill on a rising full moon you can hear the ghosts of the missionaries singing hymns. Unfortunately we were not here around full moon. Maybe next year or on the way back North we’ll be able to verify the legend.

G was snorkeling around the boat a couple of days ago and noticed a tail extending in a vertical orientation down below “Islands” keel. We figured it was probably a Barracuda that was using the boat for protection, but we were wrong. It was Reginald, at least that is what we named him. “Regie-Mon” is a 4 foot Remora. You know the fish that attach themselves to sharks and live off the tidbits his shark strews about at dinner. Regie had found an alternate lifestyle. He hangs out under boats and lives off their “leftovers.” Regie is quite tame. I wonder if he will follow us when we leave Warderick Wells?

Tomorrow, after a beach pot luck here tonight, we will head down to Cambridge Cay (Little Bell Island) and spend a few days exploring and snorkeling. Cambridge is near an area called “the Sea Aquarium / Coral Garden.” Can’t wait. Until next time. 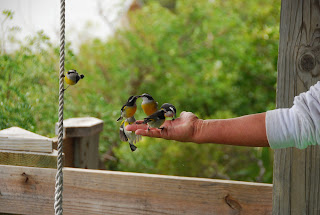 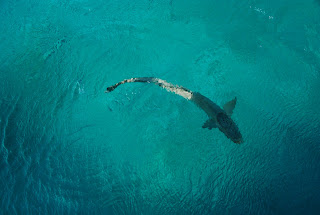