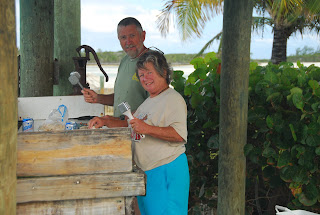 Bell Island waved geysers of white fingered spray as we swept past driven by a strong Northeast wind with a touch of incoming current. It was if she were cheering the Gigi's Island on and wishing us many return visits. We had finally escaped the winsome clutches of Cambridge Cay (aka. Little Bell Island). The Island’s crew has also finally gotten use to sailing in 20 plus knots of wind and the Banks gave us a great sail down to Sampson Cay Marina.

Our plan was to go into the Marina, do laundry, do some re-provisioning, wait for the coming blow to pass and then move on to Blackpoint Settlement in a day or so. As Borat would say, “Not!” The winds would keep us pinned to the dock 6 days until we finally just left. And..., the “Mailboat” had not come for the last 2 weeks so no groceries. Farmers Cay has “the Five Fs Festival” every year (First Friday in February At Farmers Cay Festival) and all supplies for the entire Exuma chain of islands were delivered to Farmers and none to the other islands - so no groceries. And the Mailboat scheduled for the next Tuesday was going to be a few days late (translation: some day in the next week or so).

Sampson is a great place to wait out a blow so we “honkered” down for the duration. Mac and Shirley on Cat’s Paw (actually not a catboat) invited us to go conching with them up island in Pipe Creek. Mule hugged the western edge of the string of small cays that lead into the sandy flats and aqua and deep blue shallows that make up Pipe Creek. Having a big dink with large motor really does extend your range and ability to enjoy an area - Pipe Creek is almost 5 miles from Sampson and Mule ate up the miles with no problem (a little “damp” but no problem).

We spent a pleasant day wandering the flats and shallow waters looking for conch. It took about 2 hours to take our limit (6 conch per boat). Then it was back to the marina to clean them - now that is an experience. First you knock a small slot between the 2nd and 3rd ring of spikes on the conch. Then take a small knife, reach in and loosen the animal’s grip on his shell. Then pull the conch out by his foot (pliers help). Now the hard part, cleaning the critter (others may “clean” but I “butcher.” Old Vic’s not good at this). I won’t describe this because it is not a pretty picture. What you end up with is a pure white meat. Conch that is cooked must be “tenderized” first (beat the hell out of it with a meat mallet) and Shirley was going to make garlic sauteed conch over rice for our supper so we “tenderized.” What other critter will give you supper and a musical instrument at the same time. Gigi’s Island now has 3 shells that will be made into horns.

We all met aboard Pretty Penny, a power cat out of Virginia, for a meal and gam that could not be beat with each boat contributing a dish. By-the-way John Holmes and Gene Edwards, one of the guys at supper knew Alan Carr from Sparta. He used to work in the Georgia National Guard, and had the unfortunate job of having to tell the Sparta Guardsmen that the unit was being shut down. Man it’s a small world.

This is without a doubt one of our favorite places in the Exuma chain. Blackpoint is a true Bahamian town. The school children are extremely well mannered. You never pass school colored, dressed, children that they don’t say “Good morning Sir” or “Good afternoon Mam.” Maybe it has to do with the switch I saw in the hands of one of the teachers. It appears that discipline is still a practiced art in the Bahamas.

Gigi got her hair cut here sitting out back of the laundry over looking the bay - what a view (great relief for me too, I was supposed to do the job). Ida, the beautician, as it turned out was the niece of a Mr. Lemon, the “Dr. Of Libation” at the Peace & Plenty Bar in Georgetown. She sent us on our way with regards for the good Doctor. We were to deliver it in person 3 days later.

Then there is Loraine’s Café. She offers the best food in the Bahamas, her Mom at 80 something still makes coconut bread and it’s to die for. She also offer internet service, and (best of all) her friendship. And if you are starving for pizza the DeShaMon has one of the best I’ve ever put in my mouth including the “States.” Gigi and I will return Blackpont on the way north and maybe do a little community volunteer work. In my mind, Blackpoint is the heart of the “Family Islands.”

The next day we sailed down and wiggled our way past the anchorage at Cave Cay and eased on down to Cave Cay Cut just to get an idea of what to expect for our exit into the sound the next morning. The answer was... impressive current! The cut in narrow but deep and easy to read (remember there are no markers on any of the cuts in the Bahamas). When the Island did her pirouette to return to the anchorage the boat speed dropped to 2.3 knots and continued decreasing. At full cruising RPMs we were just able to maintain 3 knots until the current started to turn us loose behind the island. We picked a spot to anchor about mid way up Cave between Gallot and Cave Cuts and were rewarded with little current and a dropping wind. Then settled in for what was going to be an evening of a lifetime.

We had just finished our first “sundowner” and I was below getting supper started when G called, “Come up and see. This is going to be a spectacular sunset.” I grabbed the camera, took a couple of shots and had just commented to G that, “This was “green flash” territory” - there was not a cloud in the sky and the sun was setting with no obstructions all the way to the horizon. Just as the sun was sucked up by the sea a burst of green light erupted and a spontaneous cheer went up through out the anchorage. I have spent 30 year, ever since I started boating, watching sunsets hoping to see a green flash never really thinking they were real. Cave made G and I true believers and it was worth the wait.

The next morning was Friday the 13th of February. It is bad luck for sailors to start a voyage on a Friday - any Friday. Friday the 13th has always been bad luck in anyone’s book so this day was a double whammy. However, it was a perfect weather window to exit into the exposed, 2000 foot waters of Exuma Sound and make the 40 mile voyage on the outside to Georgetown.

The winds were around 10 knots and conditions were stable. A good weather window trumps, Friday the 13th any day in my book. We exited Cave Cut at 7:20. The Island had a beautiful sail down the Sound to Conch Cut, the entrance into Elizabeth Harbor and Georgetown. We were at anchor off Sand Dollar Beach, Stocking Island by 2:00 PM. We fished all the way and caught nothing...as usual. However, one line did have it’s lure bitten off so I’m getting better (or is that worse).

Mike and Maril Doster will join us for a week starting the 28th of Feb. And the Georgetown Cruiser’s Regatta begins on the following Monday. More good times are in store for the Island and her crew. 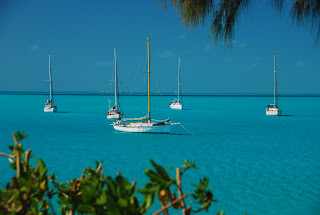 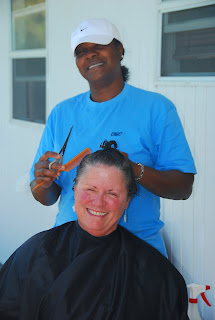 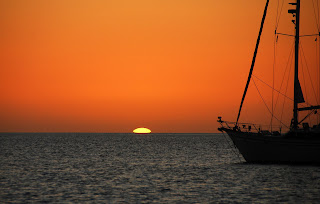