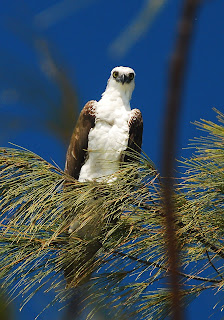 I have been wrestling with this, trying to figure out how to explain Georgetown ever since we arrived on Friday, February 13th ...and I still don’t know. My first impressions were mostly negative colored with a bit of dislike. That faded to miss understanding. By the time we hauled the Island’s anchor and headed back North to Black Point Settlement it had settled into “just not my cup of tea.”

“Georgetown” is really just a minor part of what is “Elizabeth Harbor” - a harbor approximately 10 miles long boarded on the West by Great Exuma Island and the East by Stocking Island, Elizabeth Island, and Fowl Cay. In an easterly blow all the boats snuggle up to the shore of Stocking and dingy ashore in relatively calm seas. When the winds blow out of the West they re-anchor on the Georgetown side for shelter from the wind and wave.

While we were in “Georgetown” the community of boats numbered almost 300 boats (a normal year will see 500 or more). The community here is very organized. There is yoga, volley ball, poker, swimming, classes in marine electronics, HAM classes, not to mention miles of trails an beaches to walk or dingy too. There is always something going on at Volley Ball Beach and Chat and Chill, a local bar. While we were in Georgetown everything was focused on “Regatta,” the 29th annual cruising boat regatta, with “happenings” for almost 2 weeks.

Opening ceremonies included a variety show (talent not required and actually discouraged), pet parade (see photos of the long haired dachshund that was “grand marshal”), a parade of boats, “coconut challenge” (700 coconuts dumped in a small bay with teams of 4 in dinks with 1 oar and 1 swim fin - object to collect the most coconuts) and of course sailboat races.

The highlight of the pet parade was two young girls that entered their new found “pets.” A little 3 year old had a conch on a lease named “Slimy” that she drug around the sand and her older sister with a hermit crab she paraded across the stage. They only took honorable mention...but should have won the whole damn thing in our opinion.

The highlight of our stay in Georgetown was a visit from Mike and Maril Doster. They were, are just plane fun to have around and great boat guests. I was worried that Maril might not be able to handle “dingy life” especially with the cold temps and East winds blowing a blustery 20 to 30 knots. She did great and even got to the point she stood in the dink holding on to the painter while we were underway (the mark of a true cruiser).

For Gigi and I perhaps the nicest thing that happened to us while in Georgetown was a new friend, Mr. Lermon, “The Dr. of Libation” at Peace and Plenty Hotel bar. The Doc is the uncle of Ida, the beautician that did Gigi’s hair at Black Point. Ida told us to look him up when we got to Georgetown and we did. I took him a photo of his niece and took a photo of him to give Ida when we returned to Black Point. If you are ever in the area be sure and have a drink with the Doc. He is one fine man with his head and heart in the right place.

Maril and Mike left on Saturday and (of course) the wind dropped out and it warmed up on Sunday - why is it always that way? We watered up the boat, took on a few provisions at Exuma Markets and prepared to head North for Black Point Settlement bright and early on Monday Morning.

I guess I better explain how water is taken on... It is all done by dink and 6 gallon jerry jugs. We have two so a trip brings 12 gallons to the Island. Georgetown is one of the few places where water is free. Exuma Markets provides both a dinky dock and water just in side Lake Victoria ( see photos of cut thru solid rock that is used to enter the lake). Here you do not even need to leave the dink for water, you just cue up, fill up, and make the mile run back to the boat to unload the water. We took on 48 gallons.

Monday provided an almost perfect sail up Exuma Sound and thru Dothum Cut off the end of Great Guana Cay and Black Point Settlement. Entering the cut reminded me of why I love the upper Exumas Cays North of Georgetown so much. The is a beautiful aqua, 30 feet deep, and so clear you could see red starfish on the bottom. We were back “home” where the water is fit to snorkel again. In the Georgetown area the waters are just not as clear and reefs are in poor shape with few fish. Maybe that was my biggest complaint about Georgetown other than the over organization is the lack of clear water with live reefs.

It’s good to be back North. Gigi has already gotten her hair cut at Ida’s and all is right with the world. 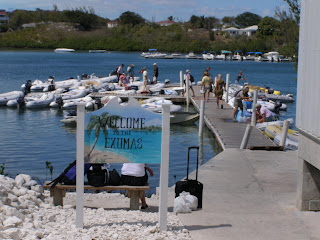 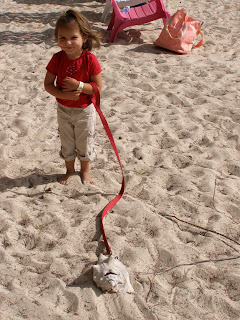 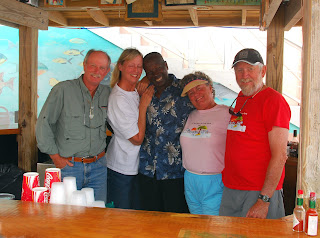 Glade to see your post. I was beginning to get worried. It looks like your work is much prettier than mine. See you this summer I hope.