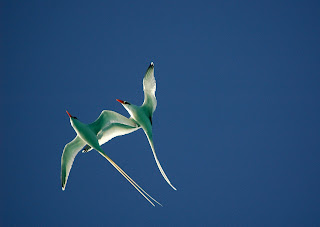 After a great sail up from Sampson we settled into the mooring field at Shroud Cay. Shroud is part of the Exuma Land and Sea Park and has installed a mooring field to protect the sea floor from anchor damage...(and to make a little money to support the Park). Shroud is unique among the cays in the Exuma chain of islands. It is really a number of small cays laced together by mangrove creeks. It is also a nesting area for the White-Tailed Tropicbirds.

As per tradition, G and I settled into the cockpit for “sundowners,” a little music, and a beautiful sunset. A mega-yacht in the 150' range eased into the anchorage behind Gigi’s Island and went to anchor. G immediately became envious. No, not the boat. The treadmill on the foredeck. Poor G she now has “treadmill” envy (see photos).

We were awakened to the staccato “kips”of tropicbirds engaged in their mating dance (see photos). Tropicbirds rarely “talk” (mating is one of the few times) and just as rarely visit land. Mating is the only time they come ashore. What could be better than to start the morning over coffee in the cockpit with a “ballet of mating tropicbirds” to escort the day to life. The dancers are quite graceful with twirls, darts, and dips. The intertwined pairs soar thru the deep blue sky with sword like tails describing sensuous spirals. I never though I’d see this kind of beauty in my lifetime and count myself so lucky. If you are ever around Shroud Cay in the early spring take the time sit and enjoy the “Ballet.”

On the rising tide we were off to explorer one of the mangrove creeks that lead thru the cays that make up Shroud. People had told us about a particular creek near the North end of Shroud that leads all the way thru to the ocean side - everyone we talked to said it was a must see. The creek snakes it’s way thru sheer rock and mangrove, in water of yellow to aqua. We did the creek standing in the dink in true cruisers fashion to better distinguish between the yellow shallow water to the deeper aqua. Mangrove are where life begins - it is the start of the food chain and the key to most sea life. This creek was no exception and the creek was alive with small fry of all kind. We felt like Humphry Bogart & Katharine Hepburn in “African Queen” guiding Mule thru the shallow headed for god know whatever lay ahead. As we rounded a little bend, there in front was the deep blue waters of a cut less than 50 feet wide leading to the ocean. The pictures can not do it justice. This is one of the most beautiful places on god’s earth.

We took Mule thru the cut and there, spread out in front of us, was the deep deep blue of Exuma Sound (ocean), ringed by small cays and reefs, and set in an aqua blue green sea. I will say it again, this is one of the most beautiful places on god’s earth. The beach is of the finest white sand and not a footprint in sight. It was as if we were the only two people on earth and had just discovered “Eden.”

We eased Mule back thru the cut and beached her. Then walked the beach leaving all evidence of our existence to be erased by the incoming tide. The water was so beautiful G could not resist its call. She walked to the end of the sandbar extending across the mouth of the cut, jumped in, and was gently carried by the current back thru the deep blue swift moving waters of the cut into the shallow languid aqua of the creek (see photos). This, my friends, is a special place.

Shroud is one of those places where a month would not be enough time to explore it properly but unfortunately a blow was coming and it was time for us to move on in search of better shelter. We had intended to spend a day or so anchored off Normans Cay (X-home of the X-drug lord Carlos Lehder) and do a little snorkeling around some of the planes scattered around the waters south of Normans but as I said, a blow was coming. We decided to push on to Highborne Cay and go to anchor off the West side of the island. The Island had not been at a dock in close to 2 months, she needed a bath and we wanted a real standup shower with hot water. Not-to-mention, Highborne Cay marina is a great place to sit out a blow. The next morning we moved in to the lap of luxury Bahamian style - dock life.

We will be here until Wednesday morning and then move back out into the anchorage. It looks like Thursday or Friday will give us a weather window to move up to the Spanish Wells / Royal Island area to stage for the 50 mile jump off shore to Abacos. 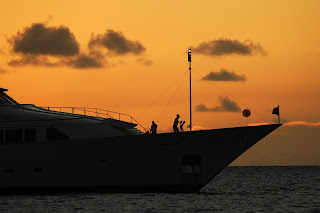 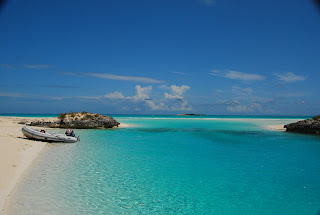 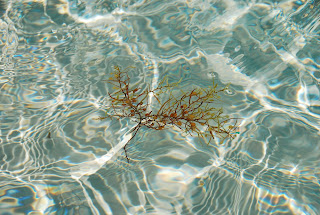 Vic ... your photo of the tropic birds' mating ballet is now our new background. Jim said that you need to quit your "day job" and just write and take photos! We love your blog and tune in every couple of days to see and read about your adventures. We'll have a bottle of Pusser's waiting for you if you are venturing up to Matthews Point again. Jim and Sherry "Beltane"