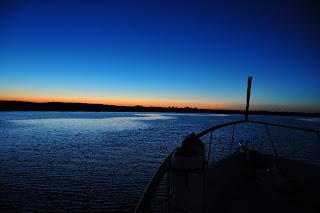 
“It takes several years for anyone to learn to handle a yacht reasonably well, and a lifetime to admit how much more there is to learn.”

Southport to the Waccamaw River:

Speaking of a learning curve..

Boat handing with this behemoth called “Salty Turtle” is becoming more natural. A twin screw power boat at slow speed responds very little to rudders. At anything less than about 3 knots turn the wheel and nothing happens. Maneuvering is accomplished by applying power to port and starboard engines – power to port engine with starboard reverse and she pivots in her own length, power just to port in forward and she turns to the right, power forward on starboard and she turns left...you get the idea. It is very different than maneuvering a sailboat and a big learning curve for us. 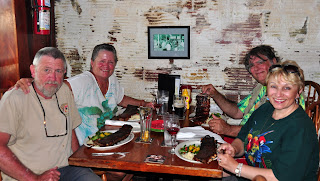 We were on the back side of a T-dock at Southport Marina with boats and other dock on both sides and a salt marsh to our stern. I put the “bitch” in there like I knew what I was doing. When it came time to leave it was Gigi's turn. She backed her to the end of the T, turned her 90 degree, cleared the T, turned her 90 degrees again, and slid out into the ICW like a pro.
The Turtle worked her way South on a rising tide thru the skinny waters of Lockwood Folly and Shallotte inlets, past Little River inlet, and into South Carolina water. From here South for the next 29 miles you are in a “ditch” dug out of limestone. From Little River Swing Bridge to Barefoot Landing Swing Bridge it is narrow and literally cut out of stone with the unseen walls of the channel at 90 degrees to the surface. This area is known as the “Rock Pile.” Prudent skippers will announce their intentions to enter this area on the VHF to let other boaters know they are entering because large vessels can not pass each other in this section. If there is a barge or other large vessel in the area you hang out until he exits.

This day it was not the rocks or other traffic that were the problem. It was floating debris driven out of the marsh into the channel by a full moon high tide. Debris was everywhere logs, limbs, pieces of lumber, even a chunk of a dock all just barely visible on the surface and we were constantly dodging and weaving. About half way thru the Turtle's luck ran out – we hit a deadhead (submerged log or piece of timber floating about 2' below the surface and impossible to see). We could feel the thud as whatever it was churned it's way pass the props. Shit!
The Turtle is OK but we think we dinged a prop – we pickuped a vibration above 1600 RPMs. Salty usually travel at below 1600 so plans are to move on to St. Augustine, FL and haul the boat there to get the props fixed. As an old friend of my was fond to say, “That's boating.” Vic's translation, “Shit Happens!”

We spent 2 beautiful Fall days anchored in the Waccamaw with beautiful sunsets, warm coffee filled mornings, good food, and the company of Tom and Olga Cook. The only down side – we took on more fuel than I thought existed. 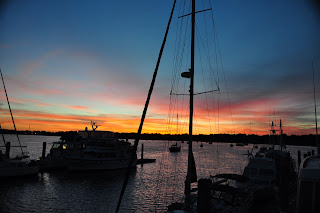 From Butler Island the Waccamaw River straightens out and joins the Great Pee Dee River spilling their guts into Winyah Bay near Georgetown. South to the Georgia you are in the “Low Country” of South Carolina. And “Low Country,” is the proper name for this area of the world with low salt marsh and a never ending crossing of creeks and rivers slowly meandering their way to the sea with the ebb and flow of the tide. 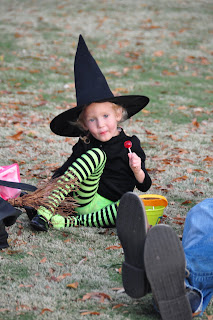 The passage thru the Cape Romain National Wildlife Area near McClellanville is always a treat this time of year with the low fall light bring the marsh to life with glowing sunsets of brilliant orange and reds, migrating waterfowl, and the song of the red-winged black birds echoing thru the marsh. This year gave us dolphins in almost ever mile of the ICW and a pair of bald eagles soaring great circles above Salty Turtle. Every time I go by McCellanville I think of the first time I sailed Oconee to the dock there, but that's another story...

It was in the Cape Romain area that I first learned dolphin speak Russian. Every dolphin brought Olga to the Turtle's side. At each encounter Gigi and I would hear Olga's soothing, musical, almost whisper like voice wishing the dolphin good morning in melodic Russian tones. The dolphin in turn, would turn their bodies sideways as they swam along side apparently mesmerized by Olga's Russian greeting. Olga loves dolphin and they her. So if anyone ever asks you, “do dolphin speak Russian?” They do. 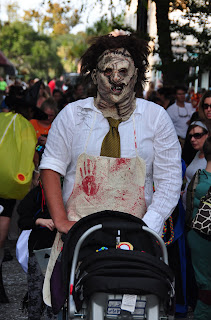 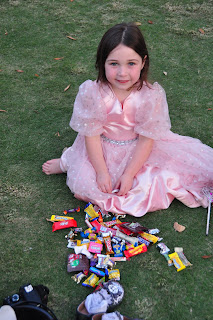 Elliots Cut joins Charlestown's Ashley and the Stono rivers just South of the city. Now we begin our trip thru the Low Country in ernest. Plans were to anchor in Tom's Point Creek about 30 miles South of Charlestown for the night but high tide and current the Turtle could ride changed those plans. This section of the trip South is really a series of cuts that connect creeks and rivers that snake their way South. In many places you can see boats heading in exactly the opposite direction as you just over the marsh and both of you headed South on the ICW. We anchored in Bull River for the night and made Beaufort, SC the next day.

Usually we anchor in Beaufort but with Olga and Tom (our good weather totems) leaving us here and Hurricane Sandy predicted to bring high winds and water we decided to take a slip at Beaufort Down Town Marina. ...Our luck left with Tom and Olga on Thursday the weather went to shit...of course.

Beaufort is one of our favorite stops on the trip South. Beaufort is a very Southern old city with classic charm, beautiful homes and gardens, and a vibrant downtown and water front park. This year it was to bring and little “ying” and a little “yang.”

We called ahead, made reservations, and ask that they have pity on boat owners new to power boats and put us somewhere easy in – easy out. Not! They put us in front of “Argonauta” a large power boat owned by Henry Chapman, the X-mayor of Beaufort that the beautiful “Henry Chapman Water Front Park” is named after - sure as hell don't want to hit him on the way out. 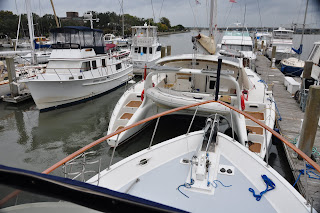 About 2 days later the “ying” started. For some reason known only to the dockmaster they decided to put a 20 foot wide, 42 foot sail cat owned by a Frenchman out of Canada named Bernard in front of us. With cross winds and a following current he hit us on the way in and did minor damage to the Turtle's cap rail. But that wasn't the ying, after all shit does happens.

Bernard refuse to give Gigi copies of his insurance. That took a day of arguing. Even the dockmaster tried and was refused. Finally when we threatened the “cops” he gave in and let us copy his insurance. Then he insisted “he would fix it.” No you will not! No and hell no! Then he announced to all “Americans were cheats and, like all Americans were trying to steal from him.” Boy that went over real well with Gigi and I. You can think what you want about our country but you better not say it. All I really wanted to do was strangle the bastard but I didn't have time. I way too busy trying to keep Gigi from leaping off the Turtle and telling the bastard to get the fuck out of our country if he did not like “us Americans.” Discussions had taken a nasty turn and a minor war with France had begun.

After a day of cooling down for both sides. Gigi and I decided if he would pay for material to fix the damage we would let it go at that and worked up a cost of materials (about $400 – Awlgrip ain't cheap). We figured that would settle it. It didn't.

Bernard and his friend Dave (lawyer out of Canada off another sail cat) came aboard to discuss the “settlement.” All Bernard wanted to do was argue and offer $300. Up until this point Dave (the lawyer) thought we wanted $1000 (cost if someone else fixed the ding). Dave said, “Barnard you need to give the folk the money and settle this.” Bernard said, “No, I can get the paint cheaper and fix it myself. I'll buy the paint and have it shipped to you. Don't you trust me?” As calmly as I could under the strain of really wanting to bash his head in I said, “Bernard it is not about trust. I do not know you.” Bernard, again started his American bashing. At that point Dave said I think we better leave – smart man Dave.

After a few minutes cool down I joined Dave on the dock. He explained to me how tough cross boarder litigation could be and all over a minor difference of $100 bucks. I explained to him I had seen Gigi argue for months with Enterprise Car Rental over a $15 traffic ticket she was wrongly charged with...and won. She was not going to give in. She had been wronged and that was that. “But will she settle for less than $400?” Yea maybe when “Hell freezes over, when the mouth of the Mississippi wears lipstick, or when politicians don't lie. Whichever comes first”** Dave reached in his own pocket and added $100 to the pot. Gigi accepted and the war with France was over. The Frenchmen left the next day. Hitting no one.
“Yang:”

You know despite the dings, cold weather that has now set in, and the wind blowing it's hi-knee off Beaufort is a great place. It is what a small town with rich history and a great water front should be. Once a year on or about Halloween the town closes up shop, the main streets are cordoned off, and the park dressed for spooky fun. Then the downtown merchants open their doors to hordes of trick-or-treating kids. It is just plane clean fun, especially for a photographer on the loose with a camera. Gigi and I have been lucky enough to be here for 2 Halloweens, one Marine Corp Ball complete with starched dress blues with their “uplifting” ladies dressed to the 9s, and once, even a drum circle. This town knows how to enjoy its self. Take a look at the photos from this and previous years and you will see what I mean. 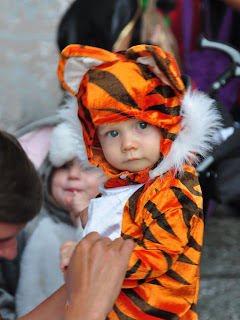 With luck, the winds will back down tomorrow and we will be once again headed South.

** Quote brazenly stolen from Capt. Fatty Goodlander...after all he would do the same for me.