“Men in ships are always looking up, and men ashore generally looking down.”

Finally after 10 days pinned to the dock in Beaufort, SC the winds from Hurricane Sandy dropped down to less than 10 knots and it was time to head South. With a strong incoming tide pushing us, Gigi handling lines, and fear in my heart I eased the Turtle out into the current with only the engines to maneuver (remember the steering wheel / rudders do not work at slow speed). An unexpected, blast of current careening off bow of the good X-mayor's boat pushed us sideways toward the small coastal cruise ship on the next dock. A quick power up and kick from port engine turned us away from the ship and added power to starboard shot us astern into the bay and clear of the docks. With a spin from forward and reverse engines the Turtle tuned 90 degrees, power to both forward, and we were headed for the ICW, and free of Beaufort Down Town Marina. The throb of the engines (and my heart) eased and the Turtle nosed South into the current. ….And Gigi and I started to breath again. Free of the dock and no one hurt or hit. 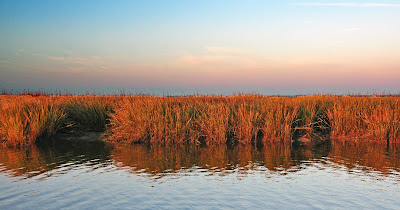 Georgia is the most beautiful section of the ICW (in my opinion) and that includes the Waccamaw River in South Carolina. The ICW here is like an old bob-tailed dog chasing it's tail and almost catchin' it...but not quite. It snakes its way thru, rivers, sounds, and salt marsh creeks. Salt marsh creeks that fill with the ebb and flow of the tide and spill life giving, nutrient rich, water over the estuary. 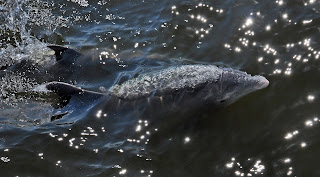 Coastal Georgia is both deep and shallow but it is chock-a-block full of wildlife. Wildlife of all kind. This year I saw my first ever Wood Stork while at anchor in Herb River, an immature Bald Eagle sitting on a red marker near Isle of Hope, and a pair of Balds roosting in a tall pine in the glow of the Fall evening sun while anchored off Cumberland Island. There are dolphin around ever bend just waiting to play in your bow wake. And butterflies, hundreds of Monarchs winging their way South with us “Snowbirds” dipping in and out from under our bimini as if to say “you guys must be a turtle even I can out race you.” And they were right. 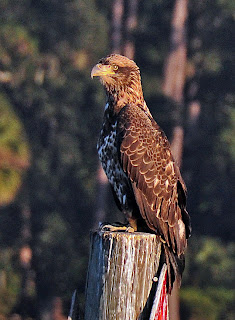 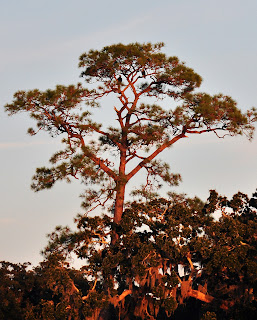 Many cruisers bypass Georgia because they say it is “boring” and “shallow” plus you can put Georgia behind you on the outside in 20 hours in what will take you 3 days on the ICW. I'll answer the boring question first...NOT! If you love wildlife; hundreds of quiet, secluded, spanish moss hung, tree bearded anchorages; and beautiful sunsets you will never be bored in Georgia. As to the “shallow?” Actually most of Georgia's ICW carries deeper water than average ICW depths. However there are few places that are damn shallow at low tide – Fields Cut, Hells Gate, Little Mud River, Buttermilk Sound and Jeckyll Island are the few that come to mind. But...Georgia has 8' or better tides so just play the tides and you gotta' no problem. If you are in too big a hurry to enjoy Georgia you probably picked the wrong lifestyle. Slow down and live brother. Slow down and live.

This trip we anchored in the Frederica River, just N. of St.Simon's Island, for the first time. The Frederica takes a left off the ICW and slowly meanders its way thur the salt marsh for almost 7 miles before it re-joins the ICW just before the St.Simon's Island highrise bridge. The chart shows good water for it's entire length and no obstructions so we decided to see if we could actually run the 7 miles back to the ICW the long way (actually not much longer in reality). We made the run at low water and in the early morning light (Oh Wow! What color!) and saw no less than 8' of water and most of the time 18 to 30 feet. The Frederica turns out to actually be deeper than the ICW. About mid-river is the remains of Ft. Frederica - now a State Park. Next trip we plan on anchoring off the fort and do a little exploring. See what I mean about Georgia? It offers new experiences at almost every bend. 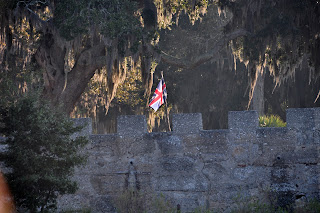 Salty Turtle wound her way South past Jeckyll Island, thru Cumberland Sound, past Kings Bay and the submarine base where the little machine gun clad guard boats make sure you do not get too near, past the sub degaussing station (removes static electricity from the boats) and anchored off Cumberland Island for the night. Plans had been to stay a few days here before continuing on to Fernandina, FL to celebrate Gigi's birthday. However, weather changed that. Anchored off Cumberland Island is no place to be in a N wind and that is exactly what was predicted. Bell River about a quarter mile from Fernandian Harbor Marina is much more protected and provides easy access to the town. That is where we went. 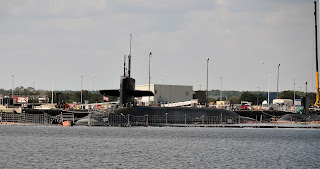 We spent Gigi's birthday (Nov. 7th) wandering around town. Gigi went to “Gaze Way” (her favorite clothing store) plus a zillion other shops and got her “toes done” (whatever that means). Vic found Gigi something for her birthday and retired to the Palace Saloon for a “cold one” to do what we men do when our women are shopping ...wait (if lucky there is a bar to wait in). Then we both went to the “Happy Tomato” for lunch. Don't laugh the place has real good pulled pork and ribs and you get a mountain of both if order a combo platter. We did. Ate the pork and “doggie bagged” the ribs for supper.

On the dink ride back I put the ribs on the seat beside Gigi. It was a little rough so I gave “Little Cay” a little more throttle to kick the stern down and bow up so it would shed water around us instead of on us. About the third wave the dink hit bounced the ribs straight up in the air and down of my starboard foot. The BBQ sauce neatly transferred its self from the ribs to my now saucy toes.

We still ate the ribs for supper (could have used more sauce). 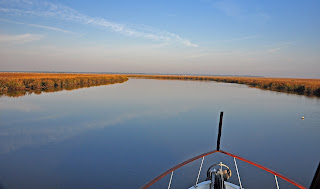 St. Augustine, FL - How Not To Pick Up A Mooring Ball:

As Salty Turtle approached the Bridge of Lions and entered St. Augustine harbor the fort “Castillo De San Marcos's” ancient cannon fired a salvo across our bow. Was it in warning or a salute to the staunch vessel Salty Turtle?
G and I had decided to take a mooring ball in the harbor for a few day since my cousin Chris Dunn was in town for a biker thing and planning a visit. Chris and I go back a long ways to summers together on my grandfather's farm and reciprocal visits to each other homes when we were kids. Chris is a year older than I and therefore at the age of 5 to 10 he was my “hero.” He taught me how to drive a tractor at the ripe old age of 8...or at least to leapfrog it down the road on 2 wheels – scared the poop out of me. His visit has been the highlight of the trip for me so far and the fact he made the effort meant a lot.

St. Augustine Marina gave us our mooring ball assignment and we proceeded to go walkabout thru the mooring field until No.48 hove into sight. It was a beautiful bluebird day with a strong current running and a light cross wind. Should be no problem. Neither Gigi nor I like picking up mooring pennants but have done so many times with on minor skirmishes. With the ominous sound of cannon fire somewhere in the back of my head, I eased up to the ball with G on deck to hook the pennant.

Gigi did a great job and boated the pennant on the first try. It was a short pennant however and barely reached the rail of the Turtle (here is where the“tides” of fortune turned against us). As Gigi reached for our bow line to thread thru the eye of the pennant that “tide” I was talking about ripped the pennant out of Gigi's hand and good old No.48 disappeared from sight under the boat and was swept aft.

Options? Two came to mind. Option 1: Use power to maneuver the Turtle off the ball. No way - Can't use the engines to try and get us out of this mess without taking a huge chance of entangling the mooring line in the props. Option 2: Wait and see if the ball will slip astern and then we can take a second shot at the mooring. We picked option 2. Turtle and crew took the “wait an see approach.”

Slowly, slowly, the mooring ball worked its way aft...and hung between the starboard strut and prop shaft. Slowly, ever so slowly, Salty Turtle rotated like the hands of a clock pivoting on the mooring pennant from 12 o'clock to 6 o'clock and there she stopped,... hung,... and stuck perfectly moored backwards. Well we wanted to pickup a mooring didn't we? We had and in a quite unconventional manner I might add. Now what do we do?

Option 2 was still the best approach...we waited. 10 minutes – nothing. 15 minutes – nope! Time to own up to our unconventional mooring and call the marina. They sent the water taxi. I asked them to tie along side and see if they could move us aft off the ball. That did the trick - Free At Last!! The captain of the Water Taxi was nice enough to give us a hand re-mooring Turtle in the correct orientation (I suspect he feared he would have to come back a second time if he didn't).

We are currently hauled out at St.Augustine Marine Center trying to figure out a vibration problem and it has become abundantly clear that the “cannon's salvo” were warning shots...but that is another story.