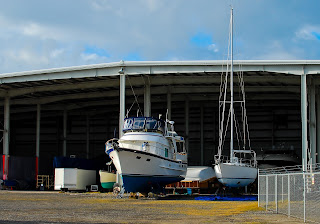 “A ship is always refereed to as “she” because it costs so much to keep her in paint and power.”

Early on the morning of the 12th of November with current running (but not at it's worst) Gigi put the Turtle in the travel lift slip as if she had done it hundreds of times before. With me scurrying around like the preverbal “chicken with it's head cut off.” Fenders were a blur dropped in here, moved to there, lines lassoed a bow and stern cleat in the slip on port, lines flung to the starboard side, jumped off secured the starboard lines and pulled Turtle to the middle of the slip. Salty Turtle was secure.

Gigi had put the boat where it had to be and Old Vic had done what had to be done all while 2 travel lift operators sent down to help us tie up watched. When I got enough time to breath I asked, “Why didn't you help us.” They responded, “Well you looked like you knew what you were doing.” It was an omen of things to come..or not come as the case may be.

By 9:30 we were hauled, blocked, and installed in our “penthouse apartment” near the fence next to the “US Customs Training Center” which was to become our home for 5 weeks plus a little (although we did not know it at the time). My first look at the props we expected to be dinged were suspiciously Not. We expected the prop shop to send someone to pop them off and scan them by lunch. Lunch came – nothing. We dropped by Pete's (yard manger) and asked when someone would come pop the props? “Oh, I'll get someone right on it.” 2:00 Nothing. We asked again. “I'll give the prop shop a call and get back with you.” By closing time no one had shown their shining face. 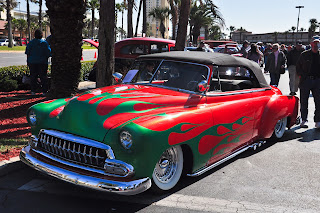 After 3 days the prop shop folk finally showed up, pulled the props, scanned them, checked the balance and my suspicion was confirmed - the props were perfect. It had taken them all of 1 hour to pull the props, scan them and confirm they were OK. Three days to do 1 hours work! What now? Bent Shafts? Out of line shafts? Time to pull the shafts and find out.

Three more days of constantly pestering the front office and tracking down staff when they did show up finally got the shafts out of the boat. It was like herding cats. They would show up for a few minutes take a little baby step and then disappeared – frustrating is not the word. The shafts were very tight and had to be jacked out of the boat and when they exited the boat they “jumped” close to an inch off center line of the bearing in the log and when they were put on a bench and measure for true were out of straight by as much as .035” - Not good. The shafts had to be straightened, new cutlass bearings installed, and the intermediate struts moved.

By this time we had figured out what was going on in this yard – didn't help the frustration but did explain why things were so screwed up. I need to say up front that St. Aug. Marine had a good reputation or we would not have come here. However, St. Aug is a yard in transition. The yard has just been taken over by the management from the now closed Lurs factory from across the creek – the one and same management team that drove Lurs into the ground. The yard manger, Pete, is leaving and the yard is going from on site staff to an all “contractor” yard so the left hand does not know what the right is doing and no one communicates...period. Add to that if you need glass work it's a different contract. Engine work different contract. Rigging different contract. Hydraulics, different contract. It's almost as frustrating as a union shop but not quite. It took 2 contracts and sets of contract staff ( different “cats to herd”) to get the cap rail they busted hauling the boat fixed (didn't mention that did I). Once we figured out the struts needed to be moved the holes where the struts were originally needed to be glassed in and (of course) needed a different contractor and that added 3 days to the project. Why? Again, different set of “cats to herd.”

I'll spare you the rest of the blow-by-blow of the repair job but after 5 weeks the job is almost complete and we are back in the water. Hopefully, the final alignment will be done today and the Turtle can again get under way / making way.

The best thing that has come out of this whole, maddening deal is Danny. Danny is the guy that has done most of the work on the alignment. From the first, we worked well together...but then he is an “old gray beard” like me. Danny has done alignments on more engines than he cares to think about. He is old and slow with busted up knees, through, patient, meticulous, and a good teacher. He possess the kind of characteristics that only come from experience. In short just the kind of guy you want doing a complicated job like Salty Turtle needed. Danny has taught me a lot and now I am lucky enough to call him my friend as well. 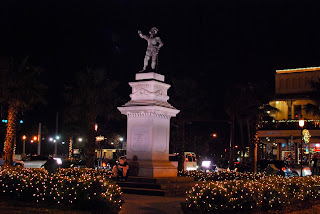 Living on a boat on land is not like living on a boat in the water. She is a beached whale and out of her element and her inhabitants are as well. The head does not work because it has no water to flush with and if it did your “poop” would “plop” on the ground and the boats around you would get really pissed. Every time you go to the head (night or day) you have to scurry down two flights of ladders to the ground (with your knees crossed and a prayer) and scurry across the yard to the the head that might or might not have TP. At night we kept a 5 gallon bucket in the head for “emergencies” - luckily Gigi is “bucket broke.”

Showers are the same deal. We carry enough water to use our shower but again it is a “no-no” to eject a 2” stream of water out the side of your boat while in a boat yard. The showers here at St. Aug. boat yard gave the ones at McCotters Marina a run for their money in the in the cleanliness department (or lack there of). And speaking of cleanliness...every time you come aboard half the boat yard comes with you and transfers its self to your decks. Cleanliness does not happen in a boat yard. TV?? Well the Turtle was backed up to a big Butler Building and it did an excellent job of filtering out all channels except FOX TV - yuck. In short boats are not meant to live on out of the water..and neither are a boats inhabitants. 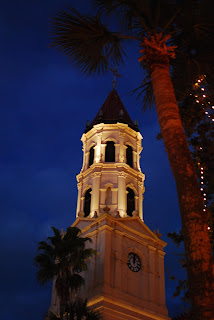 Life is What Ya Make of It:

Life is what you make of it – hell, heaven, misery, or adventure and it is for you to pick. About the end of the second week we started to “adapt” and enjoy St. Augustine. St. Augustine is full of history. After all they will be celebrating their 500th year next fall - will that be a happening or what. It has one of the best brew pubs on the East Coast, A1A Brewery and any number of great restaurants. Then there was the annual re-enactment of the “British Night March” and light show. The tradition started when the Brits were in charge of St.Augustine. Every night when the gates were closed the town cryer would lead the troop around the city announcing the closing of the gates letting the town folk know to get their “hiknees” inside or spend the night outside the walls at the mercy of whatever was..well.. outside the walls. It was actually quite a show with drum an fife corps, and many people in period costumes (children included). 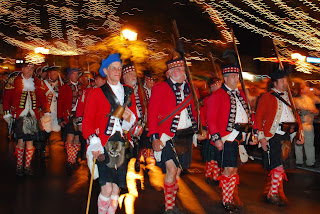 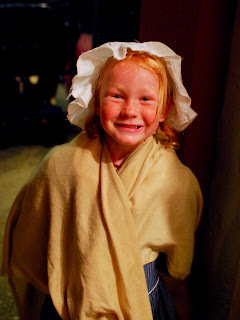 On the first friday night of every month the city's art galleries open their doors to everyone for “Art Walk.” If you are every here spend a pleasant Friday night wandering from gallery to gallery accompanied by the sounds of live Jazz filling the air with laid back music perfect to enjoy a little wine and cheese provided by the galleries.

We had reunions with cruising friends passing thru (and now well ahead of us on the path to the Bahamas) – Bob and Penny Kingsbury on Pretty Penny & William and Francis on Alexia; and Harriett & Skip on Moondancing. I ran to earth John Fitzgerald, a former employee and friend, that as it turned out lives here. He now has a beautiful wife and two fine boys. We had Thanksgiving dinner with Steve and Aggie Knox who live not far away in Palm Coast and a real “Russian” dinner with Tom and Olga Cook, the couple who made the trip part way down the water way with us this year. Tom took us to The Rat Rod competition at the Iron Horse Saloon in Daytona (see photos). Tom won “best in show.” Then there was the boat parade and lights, lights, more lights. All this and Olga re-painted Gigi's dingy cowling. Olga is a true artist and she out did herself this time. 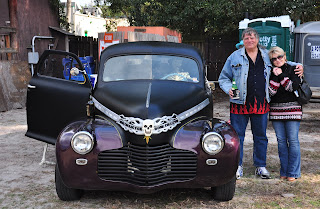 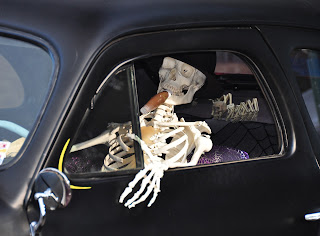 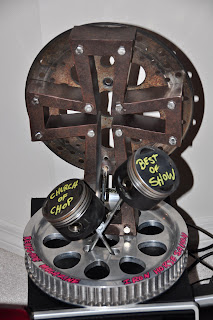 Then there was just walking around the “Lincolnville” township. Lincolnville is really a part of St.Augustine on the “wrong side of the tracks” that lies between St. Augustine Marine and in our direct path to A1A Brewery and downtown – about a 1.5 mile walk. Had we not been hauled out at St. Augustine Marine we would not have experienced Lincolnville. We quickly found out it was an area to be savored and lingered in not sped thru. It is full of small well kept homes, flowers, small gardens and friendly people. It's history is steeped in the civil rights movement of the 50 and 60s. Much of Florida's Civil Rights reform started here and their inhabitants are proud of their heritage and rightfully so.

We are back in the water. It is wonderful to be able to pee in my own head again. Hopefully Danny will finish the alignments tomorrow. 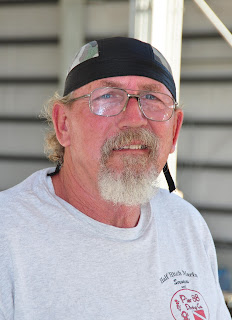 PS 12/13/2012 - Well we thought Danny was going to be down first thing this morning to do the final aliment of the engines. Danny had not showed by 10:00 so it was time go find him and see what was going on. Danny was no where on site and time to do what we have learned to do here go find Pete and force “communications.” Pete called Rick, Danny's boss. Danny's lady friend had had a biopsy done a few days ago. The results come in this morning and the doctor wanted to see here immediately. Danny, (of course) did what all good men do, he was going to be by her side at the doctors and went with her. Keep them in your thoughts over the next few days.

If Danny can not make it to work tomorrow Gigi and I will do the alignment ourselves and move on down the road....we hope.

PPS 12/13/2012 – Danny arrived at 8:00 this morning and we were finished with the alignments by noon. They removed a “hunk” of malignant growth from Bonnie's leg yesterday, Danny's lady. The doctors think they got it all. Keep her on your “thoughts” list.