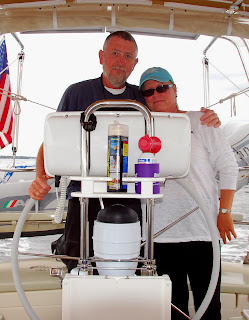 Gigi’s Island reluctantly left Palm Coast Marina and headed south. Again it was COLD with wind off our stern quarter which made it even colder. We had planned to anchor off Daytona for the night but not spend any time there. The guide books advise locking your dink and everything that ain’t nailed down in the Daytona area so it we elected to give it a pass.

The next day was much warmer...and we had ourselves a convoy. There were at least 8 boats strung like elephants in a circus parade nose to tail, nose to tail. And all in front of us, which in my mind, was a very good thing since 15 miles ahead of was my least favorite spot in Florida - Ponce Inlet. Last year Oconee and I ran hard aground in Ponce. This year we had 8 other boat to show us where not to go. I like it when a plan comes together. As it turned out, it was a non-issue. The inlet had been dredged and it was clearly marked, for a much need change.

We anchored just south of Titusville and used the NASA Causeway to knock down the seas. The Island was in clear view of the entire NASA complex including the maintenance buildings and both shuttle launch pads. You could not of pick a better spot to observe a shuttle launch...if there had been one.

The next day was warm and we had ourselves the long awaited “shorts” weather. In this area of the Indian River the ICW runs beside “a sting of pearls” - small, palm studded, spoil islands strung from Titusville down to Vero Beach. Each island has it’s own designated use and each is unique. By 2:00 in the afternoon, we were sharing an anchorage with a beautiful, old, black hulled schooner behind one of these “jewels” with our traditional anchors down tody in hand.
We didn’t know it at the time, but we were anchored in the “Pelican Island Wildlife Persevere National Wildlife Center.”

We were just settling in for a pleasant evening when the “show” started. Flocks of pelicans, cormorant, turn, heron of various colors, and dolphin, dolphin, dolphin, descended upon the waters around us and the our island. Pelicans rained from the sky scooping up bills laden with fish. Turns filled the sky rolled and dove with bullet precision to skewer dinner. dolphin were everywhere churning the water into a froth. Dinner was served for all (‘cept us).

Just when the frenzy and show was winding down a dolphin mother and calf surfaced and knifed the water directly toward Gigi’s Island. Mother and calf stayed on the surface until they reached the boat and then glided smoothly under our stern quarter. G is convinced that the mother was showing her child a “boat.” I, personally, think neither she nor her little one had ever seen a boat with a “pink flamingo” on the side before and wanted a closer look just to be sure they weren’t seeing things.

The next day took us down what I call “millionaires ally” - house after house that, I’ve been told go for 20 million plus. What a waste.

By noon we were rafted to “Temptation” in the Vero Beach mooring field. Here the Islan has gone 1029 miles to raft to Karen and Earl Quick that we could have stayed home and rafted with almost any time we desired. But that is part of the joy of cruising - short intense reunions with old friends followed by the making of new ones only to move on and away from each other the following day. We hope to see you in the Bahamas Earl. G really enjoyed meeting and doing “girl” stuff with Karen. Soon old friend. Soon. 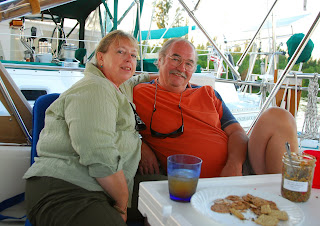